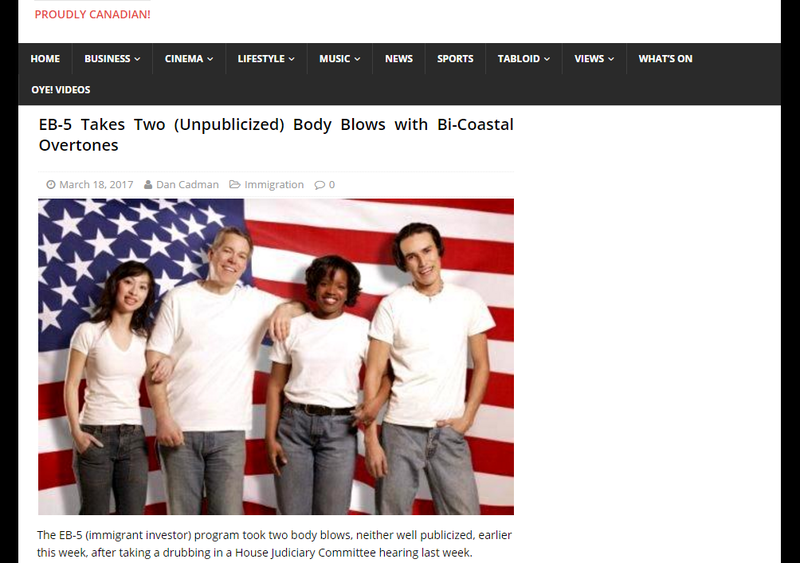 This week’s reverses both had bi-coastal angles. In the first, yet another EB-5 fraud case emerged in the state of Washington; it was announced (and denounced) by the Securities and Exchange Commission (SEC).

The latest EB-5 fraud is all too familiar. Like so many others, a U.S.-based person with a Chinese name, Andy Shin Fong Chen, was charged with having “fraudulently raised over $14.5 million from [presumably Chinese EB-5] investors” to quote the complaint, and that, in turn, was filed by the only cop on this beat, the SEC. (For the details, see the courts’ electronic filing system, PACER, at case 2:17-cv-00405.)

Chen’s alleged fraud, like the one involving the Jay Peak ski lodge in Vermont, used EB-5 investors’ money to, among other things “engage in personal stock trading, satisfy margin calls … [and] make lease payments on a luxury car.”

One has to “satisfy” a margin call only after one has lost some to a lot of money in stock trading, so Chen not only played fast and loose with investors’ money, he was a loser in the market as well, a bad combination.

This part of the complaint underlines the casual manner in which DHS runs (or at least has run) the EB-5 program in the past. Why such an obvious bit of financial trickery – putting EB-5 moneys in margin accounts – was not discovered by DHS remains a mystery.

Meanwhile, another advocate of terminating the EB-5 program has emerged. He is Rep. Steve King (R-Iowa), one of the most conservative (and occasionally controversial) members of the House of Representatives. On this issue, if not on most others, he has an ally in Sen. Diane Feinstein (D-Calif.), one of the most senior and most liberal Democrats in the Senate. (Some years ago, after the killings of George Moscone and Harvey Milk, she succeeded the former as the mayor of San Francisco; King, on the other hand, is a farmer’s son from one of the most rural districts in the nation.)

In his announcement, released in Washington, D.C., Rep. King said that the program is “selling access to citizenship and selling it cheap” and that the system is full of “fraud and abuse”.

Unusually, the GOP leadership of both the Senate and the House Judiciary committees, as well as the ranking Democrats on the committees, are in full agreement with the Obama proposal, which relates largely to making rural investments more likely and increasing the minimum alien investment from the current (de facto) $500,000 to $1,350,000. The second of these proposals would bring more money into the program without increasing the number of visas. The industry is dubious, worrying that the increased fee might dampen the demand for the visas, and is totally opposed to anything that challenges the current practice of putting EB-5 money largely in Wall Street, Park Avenue, and Beverly Hills addresses.

Significantly, the “the four corners”, to use a Washington term, were in complete agreement with each other and the former administration. Opening statements from House Judiciary Committee Chairman Bob Goodlatte (R-Va.) and the ranking minority member, John Conyers (D-Mich.), and testimony in the House by their opposite numbers in the Senate (Sens. Chuck Grassley (R-Iowa) and Pat Leahy (D-Vt.) made the positions of all four members of the quartet clear: Let’s get those regulations adopted.

There were five other witnesses; three wanted substantial changes in the program, one wanted to leave the status quo pretty much the same, and I called for support of the proposed regulations as a back-up position if out-and-out repeal was not available. You can view the hearing, here.