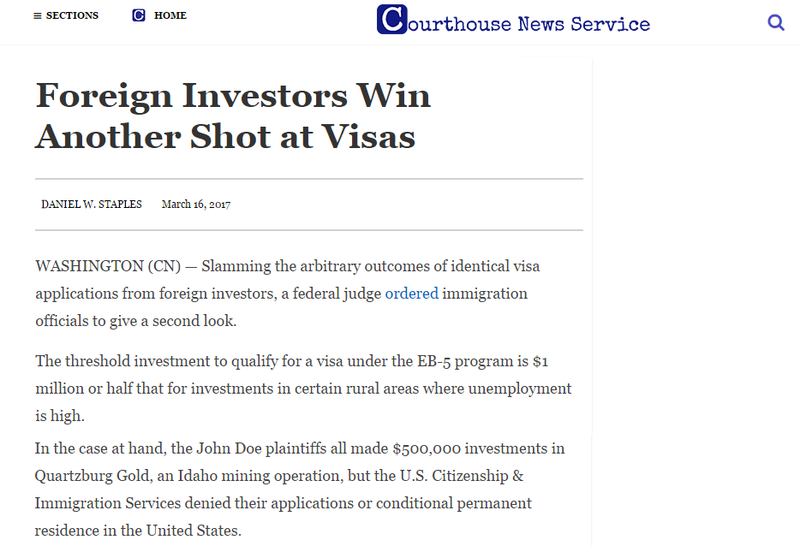 Slamming the arbitrary outcomes of identical visa applications from foreign investors, a federal judge ordered immigration officials to give a second look.

The threshold investment to qualify for a visa under the EB-5 program is $1 million or half that for investments in certain rural areas where unemployment is high.

In the case at hand, the John Doe plaintiffs all made $500,000 investments in Quartzburg Gold, an Idaho mining operation, but the U.S. Citizenship & Immigration Services denied their applications or conditional permanent residence in the United States.

In a similar manner, the plaintiffs supplied the agency with assurances that their investments were made in so-called “targeted employment areas,” that they met the minimum-investment amount, that the venture in which they invested would create jobs, and that their capital was at risk.

First, Kollar-Kotelly found, the USCIS’ finding that the investors did not risk their capital “is counter to the evidence that was before it.”

“Second, the Court finds that by issuing various different denials, even though each plaintiff’s petition and supporting documents were functionally equivalent, USCIS acted arbitrarily by treating similar — indeed practically identical — cases dissimilarly without providing any reason for doing so,” the March 10 decision states.

Rather than direct the agency to grant the petitions, however, Kollar-Kotelly said she would only remand the petitions for reconsideration.

The USCIS failed to return a request for comment on the memorandum decision.