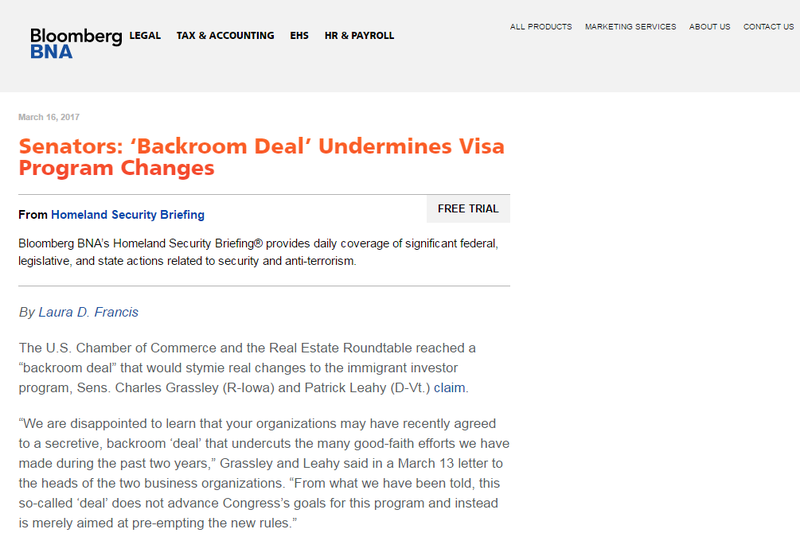 The U.S. Chamber of Commerce and the Real Estate Roundtable reached a “backroom deal” that would stymie real changes to the immigrant investor program, Sens. Charles Grassley (R-Iowa) and Patrick Leahy (D-Vt.) claim.

“We are disappointed to learn that your organizations may have recently agreed to a secretive, backroom ‘deal’ that undercuts the many good-faith efforts we have made during the past two years,” Grassley and Leahy said in a March 13 letter to the heads of the two business organizations. “From what we have been told, this so-called ‘deal’ does not advance Congress’s goals for this program and instead is merely aimed at pre-empting the new rules.”

The two senators have been at the forefront of efforts to overhaul the EB-5 program, which allows foreign nationals to obtain green cards if they invest in projects that create U.S. jobs. So far, Congress has enacted short-term extensions of the program without any change.

Grassley and Leahy have called for Congress to let the program sunset absent an overhaul and are concerned that industry lobbying may hamper their ability to reach a deal among their colleagues. The program is set to expire April 28.

“As is fairly typical in the legislative process, stakeholders representing various and at times competing points of view—including the Chamber, the Real Estate Roundtable, the EB-5 Rural Alliance, and others—have been working to develop a feasible, practical proposal that meets the goals of policymakers and the needs of our economy,” Randy Johnson, the Chamber’s senior vice president of labor, immigration and employee benefits, said in a statement provided to Bloomberg BNA.

But some lawmakers have said the program contains too many loopholes that allow for fraud. They also argue that states have been given too much latitude to determine what constitutes a “targeted employment area"—a rural or high-unemployment area that allows immigrants to invest a smaller amount.

U.S. Citizenship and Immigration Services has proposed several regulatory changes to the program, which recently garnered praise from lawmakers, including Grassley and Leahy.

In their letter, the senators called the USCIS proposal “a step in the right direction” but said more changes are needed from Congress. Grassley and Leahy said they’re willing to work with industry groups on the legislation but that “our patience is wearing thin and is not endless.”

“We just received the letter and are reviewing it,” Johnson said in his statement. “With that said, we agree with the two Senators that the program needs to be reformed and we have worked for more than two years with their offices and others to meet that goal and will continue to do so.”