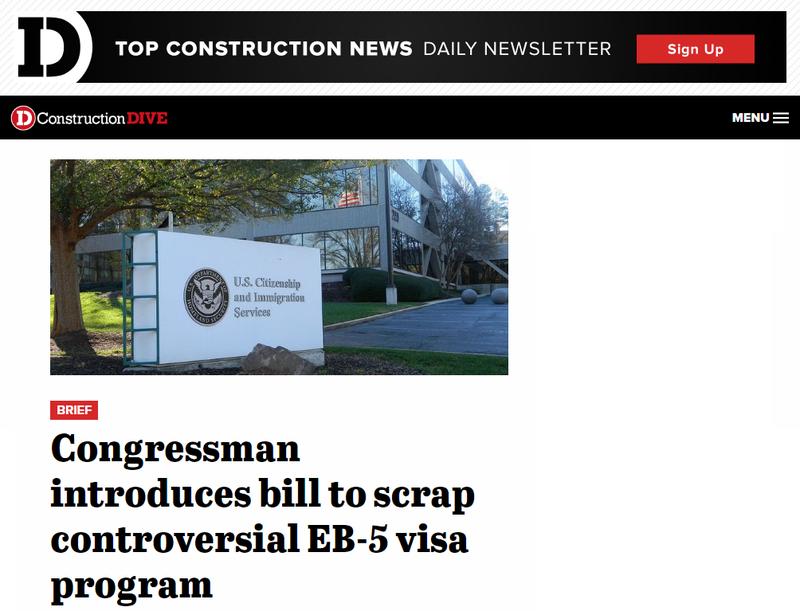 For many investors, the qualifying commercial enterprise takes the form of a real estate development. Such projects have seen a significant boost from the EB-5 program, such as Related Cos.' $25 billion Hudson Yards project, which reportedly garnered $600 million of investments that way. Underscoring how vital the program is to developers, Related has said the program should be expanded and has spent $1.4 million in lobbying fees in an attempt to keep it alive.

Due to comments King made in advance of introducing the bill, some have assigned racist motives to his actions, but the EB-5 program has plenty of critics already — largely the result of the recent spate of arrests and investigations of developers who have used it illegally.

Most recently, failed Illinois hotel and convention center developer Anshoo Sethi pleaded guilty to wire fraud and was sentenced to three years in prison for using the EB-5 program to con almost $160 million out of 290 foreign investors. Authorities claim that Sethi targeted Chinese nationals and solicited the money for a $900 million hotel and convention center near O'Hare International Airport. The project never made it out of the ground, and Sethi was ordered to make restitution as part of his punishment.

One of the most unfortunate aspects of this type of case is that the investors who follow the rules of the program — but entrust bad actors with their money — end up seeing their status as green-card applicants quickly change and face deportation.

Such is the situation many EB-5 investors find themselves in with another convicted developer, Lobsang Dargey. The Seattle developer pleaded guilty earlier this year to committing fraud and spending $240 million in EB-5 investor money on projects that were never approved by USCIS, as well as on luxury purchases. Other developers have stepped in and have tried to revive Dargey's projects.