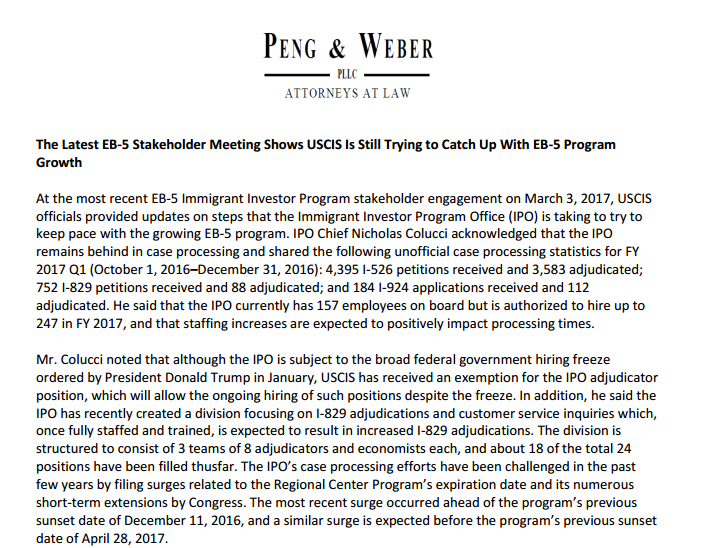 At the most recent EB-5 Immigrant Investor Program stakeholder engagement on March 3, 2017, USCIS officials provided updates on steps that the Immigrant Investor Program Office (IPO) is taking to try to keep pace with the growing EB-5 program. IPO Chief Nicholas Colucci acknowledged that the IPO remains behind in case processing and shared the following unofficial case processing statistics for FY 2017 Q1 (October 1, 2016–December 31, 2016): 4,395 I-526 petitions received and 3,583 adjudicated; 752 I-829 petitions received and 88 adjudicated; and 184 I-924 applications received and 112 adjudicated. He said that the IPO currently has 157 employees on board but is authorized to hire up to 247 in FY 2017, and that staffing increases are expected to positively impact processing times.

Mr. Colucci noted that although the IPO is subject to the broad federal government hiring freeze ordered by President Donald Trump in January, USCIS has received an exemption for the IPO adjudicator position, which will allow the ongoing hiring of such positions despite the freeze. In addition, he said the IPO has recently created a division focusing on I-829 adjudications and customer service inquiries which, once fully staffed and trained, is expected to result in increased I-829 adjudications. The division is structured to consist of 3 teams of 8 adjudicators and economists each, and about 18 of the total 24 positions have been filled thusfar. The IPO’s case processing efforts have been challenged in the past few years by filing surges related to the Regional Center Program’s expiration date and its numerous short-term extensions by Congress. The most recent surge occurred ahead of the program’s previous sunset date of December 11, 2016, and a similar surge is expected before the program’s previous sunset date of April 28, 2017.

In terms of compliance activities, Mr. Colucci said that to keep pace with the number of regional centers(now close to 900), the IPO’s compliance unit will be reorganized into a full-blown division consisting of 3 branches: one focused on Form I-924A reviews, another responsible for issuing Notices of Intent to Terminate and Notices of Termination to regional centers, and a third overseeing the IPO’s audit program encompassing both regional centers and stand-alone EB-5 new commercial enterprises. The IPO expects to conduct its first audit in April 2017 and anticipates carrying out 250 site visits to EB-5 new commercial enterprises and job creating entities in FY 2017. The site visits will be conducted by 13 inspectors located throughout the U.S. who have been trained on the EB-5 program and on gathering evidence and recording information for evaluation by IPO personnel. Mr. Colucci reassured stakeholders that IPO personnel would independently assess the findings of site inspectors in the context of each petitioner’s case before determining whether a new commercial enterprise or job creating entity is operating as expected—since site inspections might not fully capture the fact that business plans and job creation models can vary greatly from case to case, or that circumstances may have changed between an investor’s I-526 and I-829 petition filings. Finally, the IPO will continue conducting I-829 petitioner interviews in FY 2017. IPO personnel in DC will conduct these interviews with assistance from the local field office where the I-829 petitioner lives, and the petitioner will be able to bring counsel, a qualified interpreter, and a representative from the regional center (if applicable).

Mr. Colucci also highlighted several IPO plans related to EB-5 program transparency. The IPO will soon begin to publish regional center termination notices, as well as approval and denial statistics for each of the active regional centers. Additionally, the IPO is continuing to translate each of the EB-5 web pages into Chinese to improve access to information for prospective investors and others who may be interested in learning about the program. With respect to form updates, the IPO will host a webinar in April 2017 regarding the new Form I-924 published on December 23, 2016, and another webinar in August or September 2017 regarding the new Form I-924A published on December 23, 2016. It also plans to publish a new Form I-526 in April 2017 and a new Form I-829 towards the end of FY 2017 (i.e.,sometime before September 30, 2017).

Lori MacKenzie, Chief of the IPO’s Policy and Performance Division, summarized the IPO’s progress with respect to policy and regulatory updates. She noted that USCIS has published EB-5-related sections in its new Policy Manual, and that it hopes to publish additional updates to those sections in final in the near future. Specifically, she said the Policy Manual updates will include final guidance on the issues of job creation and sustainment of investment for form I-526 and I-829 adjudications—topics of particular importance to mainland China-born investors who are subject to long visa wait times. (USCIS initially addressed these topics in a draft memorandum published on August 10, 2015 that was never finalized.)Ms. MacKenzie also noted that DHS has issued a Notice of Proposed Rulemaking publishing proposed changes to the EB-5 regulations and an Advanced Notice of Proposed Rulemaking seeking public input regarding several regional center program-related issues. However, she said the IPO could not comment on issues covered by the notices, and reminded stakeholders to submit their feedback on the proposals per the instructions provided in the respective notices before the public comment periods close on April 11, 2017.

The IPO’s next outreach meeting is scheduled for sometime in May 2017, according to Mr. Colucci.