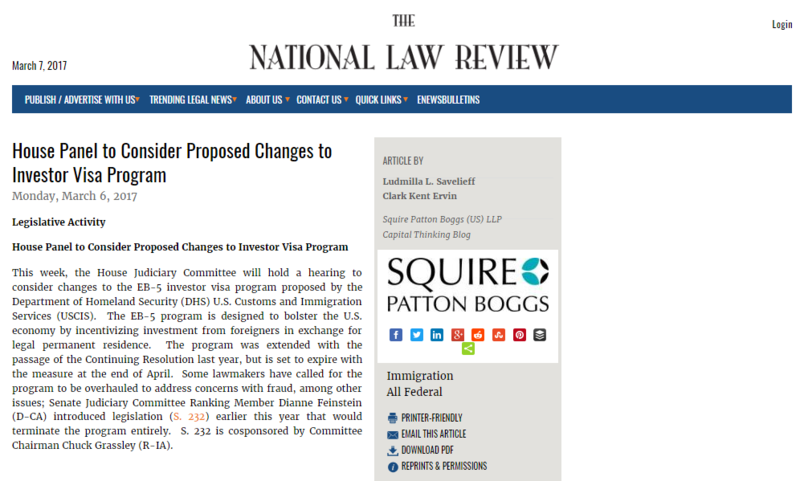 This week, the House Judiciary Committee will hold a hearing to consider changes to the EB-5 investor visa program proposed by the Department of Homeland Security (DHS) U.S. Customs and Immigration Services (USCIS).  The EB-5 program is designed to bolster the U.S. economy by incentivizing investment from foreigners in exchange for legal permanent residence.  The program was extended with the passage of the Continuing Resolution last year, but is set to expire with the measure at the end of April.  Some lawmakers have called for the program to be overhauled to address concerns with fraud, among other issues; Senate Judiciary Committee Ranking Member Dianne Feinstein (D-CA) introduced legislation (S. 232) earlier this year that would terminate the program entirely.  S. 232 is cosponsored by Committee Chairman Chuck Grassley (R-IA).

On January 13, 2017, DHS published a notice in the Federal Register requesting comments on proposed amendments to its regulations governing the EB-5 program.  According to DHS, “[t]his proposed rule would change the EB-5 program regulations to reflect statutory changes and codify existing policies. It would also change certain aspects of the EB-5 program in need of reform.”

Among other things, the DHS proposal would:

DHS will be accepting comments on the proposed amendments through April 11, 2017.