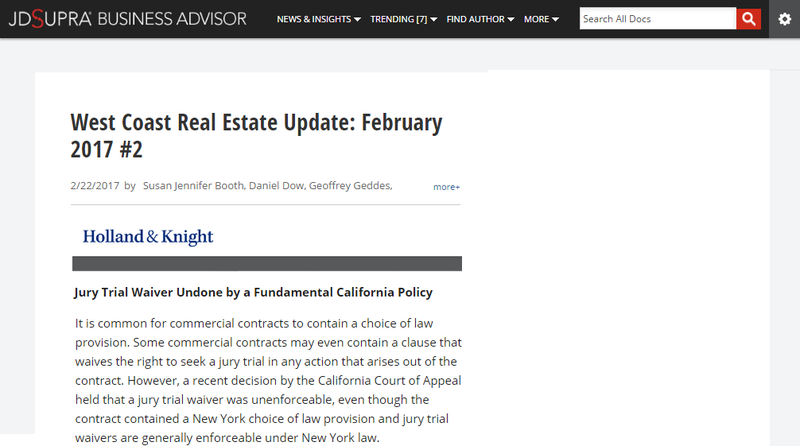 It is common for commercial contracts to contain a choice of law provision. Some commercial contracts may even contain a clause that waives the right to seek a jury trial in any action that arises out of the contract. However, a recent decision by the California Court of Appeal held that a jury trial waiver was unenforceable, even though the contract contained a New York choice of law provision and jury trial waivers are generally enforceable under New York law.

The case of Rincon EV Realty LLC, et al. v. CP III Rincon Towers, Inc., et al. involved an effort to, among other things, set aside a foreclosure sale based on a defaulted $110 million loan that had been used to purchase a San Francisco apartment complex. The loan agreement was negotiated in New York, made and accepted in New York, and the loan proceeds were disbursed in New York. In addition, the parties expressly agreed that New York had a substantial relationship to the parties and the underlying transaction. The loan agreement also contained a choice of law provision specifying that it would be governed by New York law without regard to principles of conflicts of laws.

Of all the executive orders President Donald Trump has signed one month into his presidency, the most stir has been caused by Executive Order 13769, which, among other things, banned individuals from seven predominantly Muslim countries from entering the United States for a period of 90 days. A federal court temporarily enjoined enforcement of the executive order, a decision that was upheld by the U.S. Court of Appeals for the Ninth Circuit. However, the impacts of the executive order — and what it may imply about immigration policies in the near future — are still being felt.

The popular EB-5 visa program grants green cards to foreign investors who invest at least $500,000 in projects that create at least 10 permanent jobs in certain high-unemployment areas. Although a majority of EB-5 investors are from China, Dubai is a popular hub for Middle Eastern investors in the program. The problem is that most residents of Dubai hold passports from some of the countries affected by the executive order.

Some EB-5 investors already accepted into the program are holding off on moving to the U.S. out of fear that they may be forced back to their country of origin by a new law or executive order in the near future, even if Executive Order 13769 is struck down. Other EB-5 investors are taking the opposite approach. Some attorneys who work with Middle Eastern EB-5 investors are seeing a surge in applications from those hoping to get approved before any new ban is put in place.

Most people have heard the phrase "form follows function," but most developers of urban real estate will tell you that "form follows parking" is far more accurate. Developers saddled with outdated parking requirements often find that a significant portion of their projects — both in terms of square footage and cost — is eaten up by required parking spaces. Los Angeles' parking requirements were developed 70 years ago, just after World War II, when the city experienced rapid increases in vehicle use and population, and they have not adapted to the impact of today's ride-sharing apps, such as Uber and Lyft. In addition, the younger members of Los Angeles' citizenry and workforce are more amenable to utilizing a public transit system that is growing to provide easier access to all parts of the city.

According to a 2015 study published by the American Planning Association, in 2010 Los Angeles County had 3.3 parking spaces for every vehicle within its geographic limits, undoubtedly as a result of substantial minimum parking requirements. However, other major cities, including New York, San Francisco, Boston and London, have eliminated minimum parking requirements in certain areas.

It is against this backdrop that the Los Angeles Department of City Planning is in the middle of an ambitious, multiyear project called "re:code LA" that aims to comprehensively revise Los Angeles' zoning code, including its parking requirements. The consultant working with re:code LA has made several suggestions regarding parking, from completely eliminating minimum parking requirements in downtown to maintaining current levels of parking in suburban areas and reducing parking requirements only for developments near public transit.

Of course, looming over the entire parking debate (and any other zoning issue) is the prospect of the Neighborhood Integrity Initiative, which is on the March 7, 2017, ballot as Measure S, which would prevent general amendments to the zoning code related to parking and also prevent individual projects from getting parking reductions beyond the general rules in the existing zoning code.