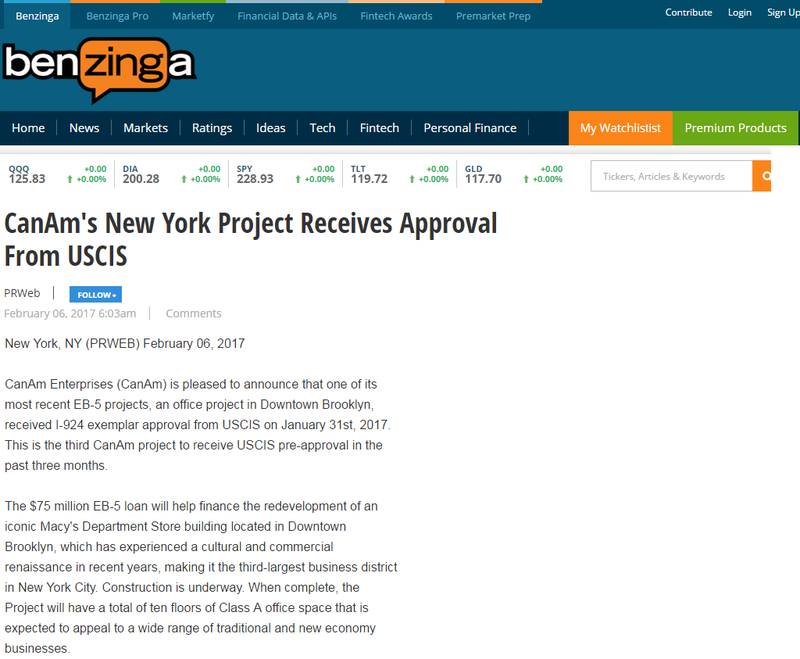 CanAm Enterprises (CanAm) is pleased to announce that one of its most recent EB-5 projects, an office project in Downtown Brooklyn, received I-924 exemplar approval from USCIS on January 31st, 2017. This is the third CanAm project to receive USCIS pre-approval in the past three months.

The $75 million EB-5 loan will help finance the redevelopment of an iconic Macy's Department Store building located in Downtown Brooklyn, which has experienced a cultural and commercial renaissance in recent years, making it the third-largest business district in New York City. Construction is underway. When complete, the Project will have a total of ten floors of Class A office space that is expected to appeal to a wide range of traditional and new economy businesses. Based on the USCIS-approved expenditure model, the Project is expected to create 2,301 qualifying jobs, well exceeding USCIS's minimum requirement for all 150 investors.

This project is another example of CanAm's dedication of bringing qualifying EB-5 projects to investors. Before launching a project to the market, CanAm's project development team selects projects that meet the intent of the EB-5 program, and structure them conservatively knowing that our investors' futures are at stake. CanAm's underwriting team conducts exhaustive due diligence in order to qualify a project as a potential investment. As a third-party Regional Center, CanAm and its employees are committed to the highest level of integrity and transparency demanded by its immigrant investors and the EB-5 Program.