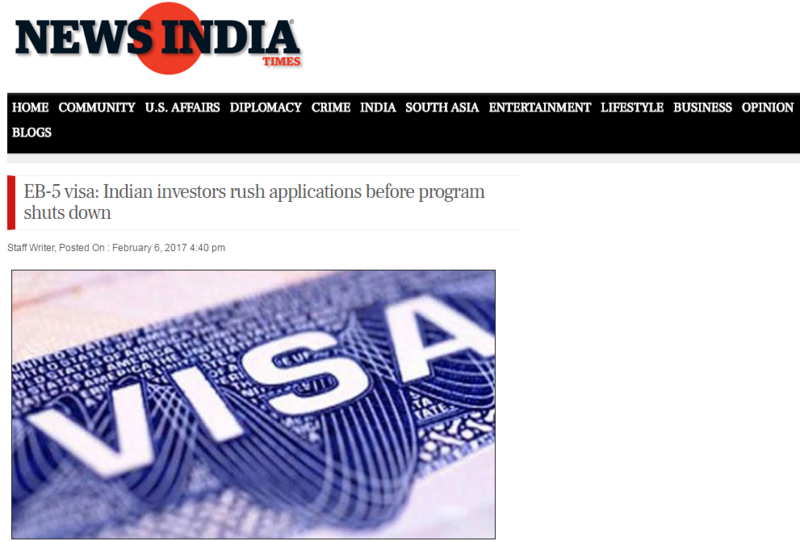 Deep-pocketed investors in India are scrambling to try and get their foot in the door for an EB-5 visa as there is concern that a proposed Bill on Capitol Hill might spell the death knell for the program which allow individuals to ‘buy’ a Green Card for their own self and immediate family members, in exchange for hefty investment in the United States.

At present the minimum investment required for an EB-5 visa is $500,000. A separate proposal from the administration also wants to raise the investment levels to $1.3 million-$1.8 million. However, of even more concern to investors who were planning to file for the visa, is a bill introduced in Congress which intends to shut down the program, plagued as it is by numerous scams and legal hurdles.

Davies & Associates, LLC, a leading US law firm based in New York City, representing a significant number of Indian EB-5 visa investors has reported a record breaking spike in filing Indian EB-5 petitions in 2017. This hike is attributed to concerns about a Bill that would terminate the EB-5 program if passed.

Mark Davies, Global Chairman of Davies & Associates, LLC, said in a statement to News India Times: “This is the first time we have seen a Bill to completely end the EB-5 program.  While we feel it unlikely that S. 232 will pass, the Regional Center EB5 program is due to end at the end of April 2017 anyway unless extended by Congress.  If the EB5 program is extended in April there is a much higher chance than ever before that the investment requirement will be substantially increased in the near future.”

In addition to concerns with the future of the EB-5 program, clients are also flocking to the EB-5 program given the increase in the H1-B salary requirements in two separate proposed bill on Capitol Hill.  The potential increase in salary to $130,000 would place the H1-B program beyond the reach of most Indian students graduating in the US and force them to use the EB-5 program in order to obtain long-term US employment, said the law firm.

“By filing an I-526 before April clients are trying to protect themselves from either the termination of the program or a substantial increase in the required capital.  Given the likely H1-B salary hike, some clients are rushing to use this window to insure their children are well equipped to pursue post-graduation employment in the US,” Davies added.

Senate Bill S. 232 if passed would end the EB-5 Investor Visa Program.  The idea behind the bill is to distribute the percentage of EB-5 visas amongst the remaining visa program namely the EB-1 (priority workers), EB-2 (workers with advanced degrees/exceptional abilities), EB-3 (skilled/unskilled workers), and EB-4 (certain special immigrants who have served the U.S. Government).

The EB-5 visa has proven to be hugely advantageous for the U.S. economy as it allows foreign investments to create jobs in Target Employment Areas (TEAs). Eliminating the EB-5 program entirely would mean losing out on the revenue generated and employment opportunities in key areas for the US population, said Davies.