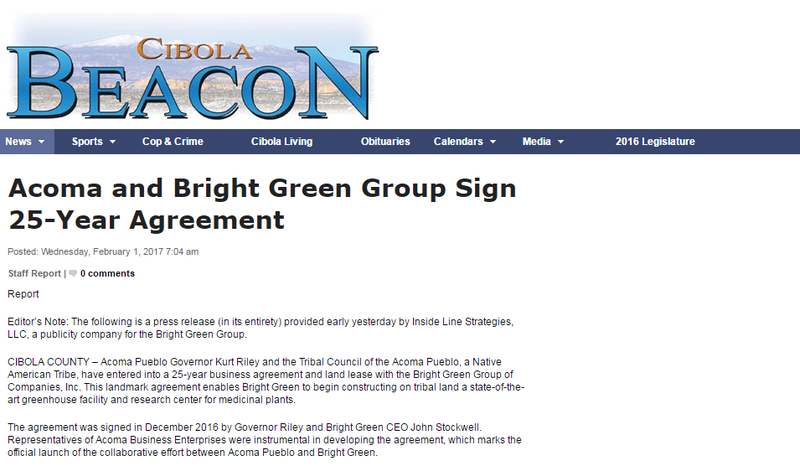 Acoma Pueblo Governor Kurt Riley and the Tribal Council of the Acoma Pueblo, a Native American Tribe, have entered into a 25-year business agreement and land lease with the Bright Green Group of Companies, Inc. This landmark agreement enables Bright Green to begin constructing on tribal land a state-of-the-art greenhouse facility and research center for medicinal plants.

The agreement was signed in December 2016 by Governor Riley and Bright Green CEO John Stockwell. Representatives of Acoma Business Enterprises were instrumental in developing the agreement, which marks the official launch of the collaborative effort between Acoma Pueblo and Bright Green.

“This is a great opportunity for the Acoma Pueblo, which will bring job opportunities and resources to the Pueblo,” said Shaun Cunningham, Chief Executive Officer of Acoma Business Enterprises. “Collaborating with Bright Green makes sense for the Pueblo in many ways. It is a great use of tribal land, provides financial benefits to the community and will be an economic driver for the local area and the State of New Mexico.”

The 25-year term of the agreement provides a strategic financial advantage to the Bright Green Group by establishing predictable, fixed costs guaranteed over a long period of time. The Group also holds numerous provisional patents that further strengthen its long-term position in the cannabinoid and herbal supplements market. The new operation will produce pharmaceutical grade product that meets rigid US, Canadian and European Union pharmacopeia standards.  Bright Green Pharmaceuticals, Inc., a Delaware company, which is the Group’s pharma, medical and marketing arm, will use the product in its novel, cannabinoid-based prescription and non-prescription pharmaceutical and nutraceutical product lines.

Kickoff of the 150-acre development is scheduled for Wednesday, March 15, according to Stockwell. “Construction will take place in four phases totaling approximately 30 months,” Stockwell said. “Phase one will be completed in September, enabling the Group to start processing and manufacturing in 2017.”

The Bright Green facility on the Acoma Indian Reservation will grow up to 40 million plants per year, which will result in production volume exceeding 1 billion grams/marketable units annually. This facility is in addition to the existing 1 million sq. ft. high-tech Venlo greenhouse Bright Green owns in Grants, New Mexico, which the company is renovating for growing various potted herbals for the supplements market.

Acoma Pueblo tribal members are among the most experienced farmers in North America, with a farming heritage that draws on more than 2,000 years of tribal history.

“Collaborating with Bright Green is a strategic part of the Pueblo’s commitment to staying on the cutting edge of agriculture for the next 2,000 years and beyond,” said Chris Ahmie, Business Development Officer for Acoma Business Enterprises. The new operation will build on this heritage, growing organic medicinal plants on tribal land.

Bright Green is investing more than $160 million in the 5.8 million sq. ft. operation. During construction, the project will create more than 1,200 direct and indirect jobs in an area with particularly high unemployment. Once construction is completed, operating the facility will create high tech jobs for the region and new opportunities for universities to collaborate with the MJ Brown Research Center that Bright Green is building onsite.

Development is funded entirely by private investment, brought together by the Bright Green Regional Center LLC, through a United States job creation program called EB-5. Congress created the EB-5 Program in 1990 to stimulate the U.S. economy through job creation and capital investment by foreign investors. The EB-5 Immigrant Investor Program issues visas to participants who invest in commercial enterprises associated with regional centers approved by USCIS, based on proposals for promoting economic growth.

“Bright Green has demonstrated real intent to benefit the reservation and its members, which makes this a unique collaboration,” said Shaun Cunningham, Chief Executive Officer of Acoma Business Enterprises. “It is truly a long-term effort that will bring economic development and quality of life improvements to the Pueblo.”