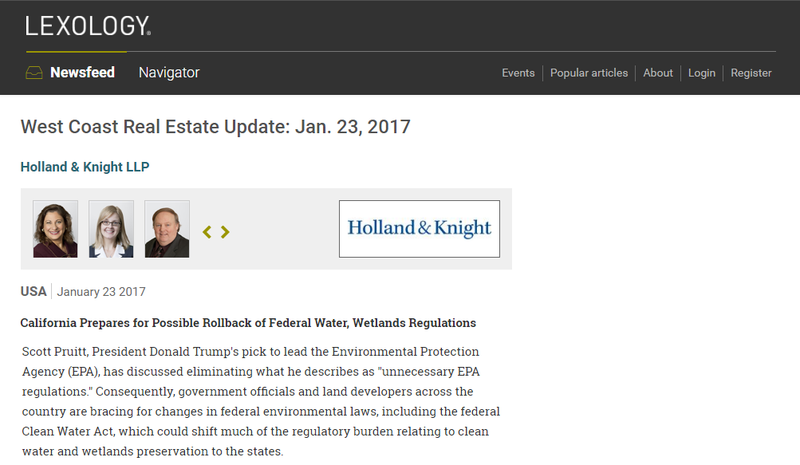 Scott Pruitt, President Donald Trump's pick to lead the Environmental Protection Agency (EPA), has discussed eliminating what he describes as "unnecessary EPA regulations." Consequently, government officials and land developers across the country are bracing for changes in federal environmental laws, including the federal Clean Water Act, which could shift much of the regulatory burden relating to clean water and wetlands preservation to the states.

In California, many regulatory agencies, including the State Water Resources Control Board (Water Board) and the California Department of Fish and Wildlife (CDFW), have already engaged in discussions about how to shore up their regulatory activities to protect water quality and the integrity of wetlands across the state. Among other recent actions, the Water Board has proposed higher freshwater flow targets for the Sacramento-San Joaquin River Delta, which, if enacted, could help prevent further damage to affected ecosystems and ensure maintenance of current fresh water quality standards. The Water Board and CDFW also have begun discussions with stakeholders, including California Native American tribes, concerning the protection of water quality from the discharges that result from suction dredge mining, a process that extracts minerals from river and stream beds.

Meanwhile, land developers are positioning themselves to navigate the anticipated federal-to-state regulatory transition. According to Doug Praw, partner in Holland & Knight's West Coast Real Estate Group, the primary concern expressed by his developer clients is the current uncertainty.

"All of our clients have accepted the reality of environmental regulation," Praw said, "but every shift in oversight and every regulatory revision inevitably adds to the complexity and cost of development."

Despite the uncertainty, some developers have chosen to embrace the pending changes, hoping that California regulators might prove less aggressive than their federal counterparts. For instance, federal regulations relating to storm water recapture and the permitting process for wetlands development are particularly onerous, adding significantly to the cost of development.

"Given our state's aging infrastructure and shortage of affordable housing, putting the regulatory power in the hands of people closer to the problems might help us in the long run," Praw said.

The proposed DHS changes include raising the minimum investment for program participants from $1 million to $1.8 million in areas with average or low unemployment rates, and from $500,000 to $1.35 million in targeted areas of high unemployment. The DHS says the new amounts would reflect the present-day dollar value of the investment amounts established by Congress in 1990.

Another proposed change would give DHS exclusive authority to define high-unemployment areas for purposes of the EB-5 program. Critics of the program have said state legislatures - which currently define the targeted employment areas (TEAs) included within the program - gerrymander areas of extremely high unemployment with more affluent areas. According to the critics, this creates TEAs that allow developers to locate their projects in the more affluent areas, thus flouting the program's intention of driving development in areas of high unemployment.

The proposed rules are open for public comment until April 11, 2017.

Bidding on construction projects for three major components of a $6 billion plan to ease congestion and improve access to Los Angeles International Airport (LAX) is expected to begin in the coming months. Contractors will be bidding on a consolidated rental car facility, a more than $2 billion automated people mover and a $600 million rail station. These projects are in addition to the terminal renovations currently underway at LAX.

The consolidated rental car facility is expected to simplify the process of obtaining and returning rental cars by moving the approximately 20 current rental car sites scattered around the airport to a single location off Interstate 405. With the current rental car facilities relocated, their existing locations will be open for redevelopment into commercial, retail and other uses that are currently lacking in the area.

The automated people mover will connect the central terminal area to the new rental car facility. This is expected to reduce traffic and pollution by eliminating bus and van shuttle trips between the rental car facility and airport terminals.

The rail station will finally connect LAX to the region's rail network. The station will be located at the end of the Crenshaw Light Rail Line (currently under construction) and the Metro Green Line. This will diversify the modes of transportation available to those going to and from the airport after decades of having to rely solely on automotive solutions.