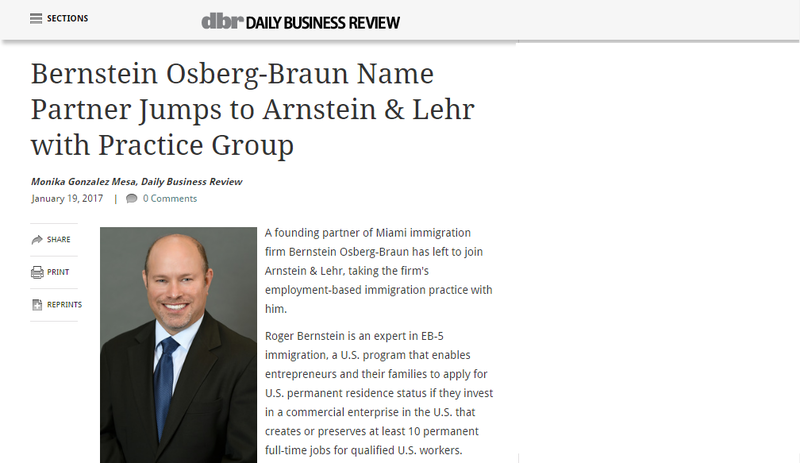 A founding partner of Miami immigration firm Bernstein Osberg-Braun has left to join Arnstein & Lehr, taking the firm's employment-based immigration practice with him.

Roger Bernstein is an expert in EB-5 immigration, a U.S. program that enables entrepreneurs and their families to apply for U.S. permanent residence status if they invest in a commercial enterprise in the U.S. that creates or preserves at least 10 permanent full-time jobs for qualified U.S. workers.

Bernstein has taken a team with him to Arnstein & Lehr that includes fellow Bernstein Osberg-Braun partner Amy Link, as well as associates Cynthia V. Gomez and Qian Wen, three paralegals, the office's chief financial officer and a file clerk.

Seven people—partner Linda Osberg-Braun, two associates, three paralegals, and an office manager— remain at what will now be renamed Osberg-Braun Immigration. That firm will continue to provide full-service immigration representation, including employment-based immigration, and will also collaborate with Arnstein & Lehr, Osberg-Braun said.

Bernstein and Osberg-Braun began working together in 1994 when they were both attorneys for the Immigration & Naturalization Service. They co-founded Bernstein Osberg-Braun in 1998.

Osberg-Braun said she also was invited to join Arnstein & Lehr but she preferred to remain independent. She added that she plans to continue to collaborate with Bernstein and will sometimes share paralegals. She is currently interviewing for new hires— both paralegals and associates, she said.

"Roger and I are partners for life. As far as I'm concerned, we will continue to work together on cases and projects, Osberg-Braun said. "I don't consider this a breakup—I consider this another dimension to both of our practices."

Bernstein said moving to Arnstein & Lehr was an opportunity that he couldn't pass up. His specialization, the EB-5 program, grants a visa and path to citizenship to foreigners who invest at least $500,000 in a U.S. business that creates 10 jobs. Bernstein's work has been focused on the immigration side of EB-5.

At Arnstein & Lehr, Bernstein will lead the firm's immigration practice group. The firm has handled almost $2 billion in EB-5 transactions over the last decade or so, Bernstein said, noting that the program has grown exponentially in the last five years, and has brought more than $15 billion in foreign direct investment to the United States since 2005. Since 2015 alone, it has brought $4.38 billion in foreign investment to the U.S., he said.

"They are one of the strongest players in EB-5 from the securities and corporate side," Bernstein said. "The merger brought together all these disciplines. That's unique in our industry. There are virtually no players that have expertise in all of these different disciplines — securities, corporate, immigration and lending, as well as real estate development."