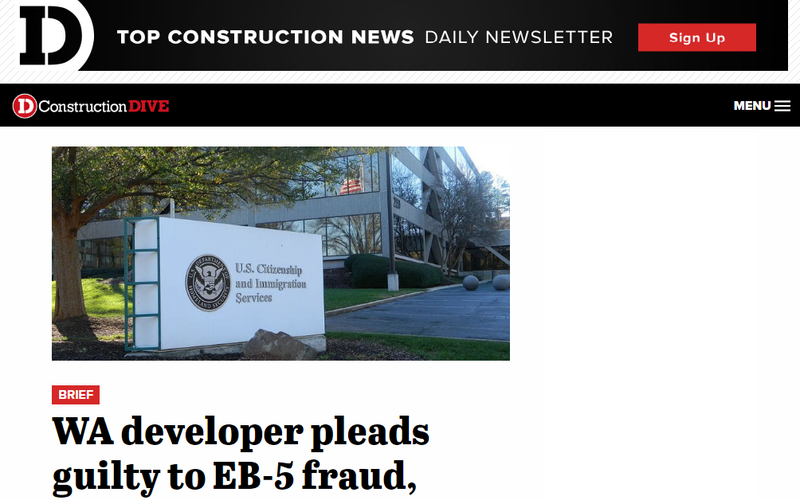 Dargey not only played fast and loose with EB-5 money, but authorities said he also provided false information to banks in order to obtain loans that promised to fill in the gaps when he diverted EB-5 funds elsewhere. According to the Seattle Times, Dargey allegedly altered bank statements to make it appear he had millions in cash on hand when he actually had less than $500,000. After those institutions provided Dargey with loans, he also supposedly faked additional documents as well during due diligence follow-ups. Authorities said Dargey took an average of $545,000 from each investor and falsely claimed their green-card status was guaranteed.

Of course, not all EB-5 developments end up like Dargey's. In fact, according to Next City, developers for the multibillion-dollar mixed-use Hudson Yards complex managed to raise $600 million from 1,200 Chinese families using the EB-5 program. And earlier this week, New York City developer Tishman Speyer also expressed interest in using the plan to help finance its $490 million partial conversion of the downtown Brooklyn Macy's building into office space. Chicago's Vista Tower developers could also raise approximately $200 million in EB-5 investment.

Another developer, Laurance Freed, of Joseph Freed and Associates, faced charges also related to false statements to a financial institution last year. The Chicago real estate developer was convicted last March of three counts of bank fraud, one count of mail fraud and four counts of making a false statement to a financial institution in connection with the redevelopment of an area department store. The charges carry a possible total prison sentence of 230 years.