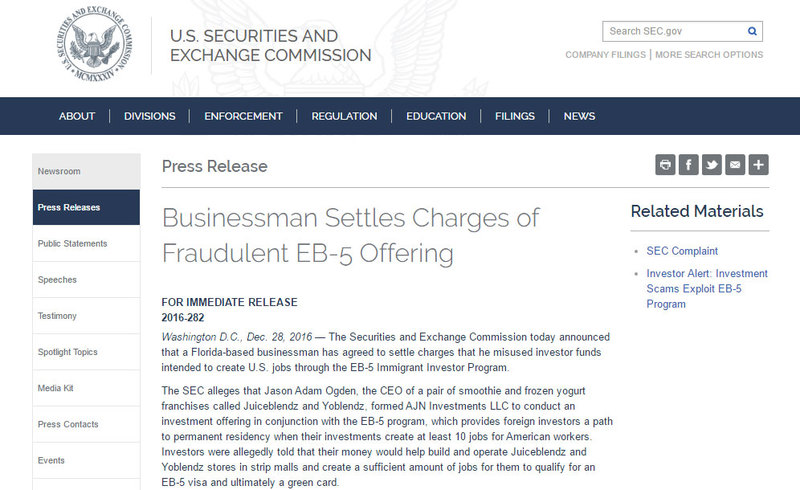 The Securities and Exchange Commission today announced that a Florida-based businessman has agreed to settle charges that he misused investor funds intended to create U.S. jobs through the EB-5 Immigrant Investor Program.

The SEC alleges that Jason Adam Ogden, the CEO of a pair of smoothie and frozen yogurt franchises called Juiceblendz and Yoblendz, formed AJN Investments LLC to conduct an investment offering in conjunction with the EB-5 program, which provides foreign investors a path to permanent residency when their investments create at least 10 jobs for American workers. Investors were allegedly told that their money would help build and operate Juiceblendz and Yoblendz stores in strip malls and create a sufficient amount of jobs for them to qualify for an EB-5 visa and ultimately a green card.

But according to the SEC’s complaint, Ogden changed his business model midstream without updating the offering materials, focusing on developing kiosks in sports arenas and university campuses rather than following through with the construction of full-size stores. Not only did this result in smaller-than-promised returns for investors, but also jeopardized their EB-5 program status because kiosks don’t stimulate the same job creation as full-size stores and construction projects.

The SEC further alleges that Ogden improperly siphoned more than $1 million in investor funds for his personal use, making undisclosed cash transfers to his bank account. Ogden allegedly used investor funds to repay a personal loan and pay for meals and entertainment.

“As alleged in our complaint, jobs and green cards fell by the wayside as Ogden abruptly changed his business plan and diverted funds for his own benefit,” said Shamoil T. Shipchandler, Director of the SEC’s Fort Worth Regional Office.

The SEC’s complaint, filed in U.S. District Court of the Southern District of Florida, charges Ogden and AJN Investments with violating Section 17(a) of the Securities Act of 1933 and Section 10(b) the Securities Exchange Act of 1934 and Rule 10b-5. They agreed to settle the SEC’s charges without admitting or denying the allegations.  Ogden agreed to pay back the amount of investor funds he misused for his own personal benefit totaling $1,008,681, plus interest of $41,024 and a penalty of $160,000.  The settlement is subject to court approval.

The SEC’s investigation was conducted by Kimberly A. Cain, Jennifer R. Turner, Timothy L. Evans, and Ty S. Martinez and supervised by Jonathan P. Scott and David L. Peavler of the Fort Worth Regional Office.  The SEC appreciates the assistance of U.S. Citizenship and Immigration Services.