Payments from EB-5 escrow will finally be released 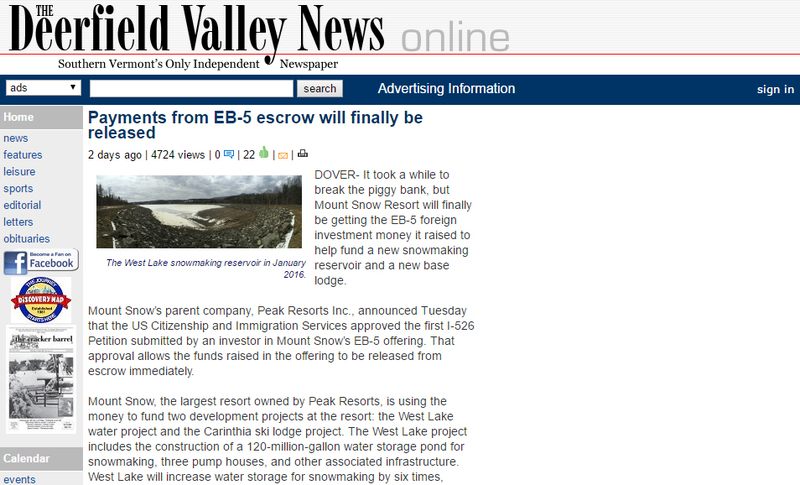 It took a while to break the piggy bank, but Mount Snow Resort will finally be getting the EB-5 foreign investment money it raised to help fund a new snowmaking reservoir and a new base lodge.

Mount Snow’s parent company, Peak Resorts Inc., announced Tuesday that the US Citizenship and Immigration Services approved the first I-526 Petition submitted by an investor in Mount Snow’s EB-5 offering. That approval allows the funds raised in the offering to be released from escrow immediately.

Mount Snow, the largest resort owned by Peak Resorts, is using the money to fund two development projects at the resort: the West Lake water project and the Carinthia ski lodge project. The West Lake project includes the construction of a 120-million-gallon water storage pond for snowmaking, three pump houses, and other associated infrastructure. West Lake will increase water storage for snowmaking by six times, enabling Mount Snow to open more trails earlier in the season and increase the snowmaking capacity on existing trails. Construction of the West Lake water project began in February 2015 and is expected to be completed prior to the 2017-2018 ski season.

“We are exceptionally pleased that the EB-5 project funds can now be released from escrow so that we can continue project development,” said Peaks president Tim Boyd in a press release. “Once completed, the West Lake project will allow Mount Snow to start each ski season with as much as 50% of its terrain open. It will also provide enough water to eventually cover 100% of our trails with snowmaking. Further enhancing the ski experience at Mount Snow should help us gain an even greater share of the Vermont ski market.”

The Carinthia project will consist of construction of a new three-story, state-of-the-art ski lodge to replace an existing 50-year-old lodge at the base of the Carinthia Slopes at Mount Snow. The new lodge will be approximately 36,000 square feet, increasing by more than four times the size of the existing lodge. It will house several food outlets, a rental shop, retail and convenience stores, and other skier services.

The new lodge has been designed so the interior can be modified during the off-season to host conferences, weddings, and other group events. The Carinthia project is expected to be completed before the 2018-2019 ski season.

In the same press release, Dick Deutsch, president of Mt. Snow Ltd., said, “The master plan for Mount Snow was approved by the state of Vermont in July 2011 and is expected to enhance the overall visitor experience at Mount Snow. Construction of the West Lake and Carinthia ski lodge is the first phase of executing Mount Snow’s master development plan and represents a $66 million investment, of which $52 million is being funded through the EB-5 program.”

While awaiting the USCIS approval, the company invested more than $15 million in project construction. Peak Resorts will be reimbursed for that spending from the escrowed money.

Earlier this year, officials were optimistic the funds would be released prior to the summer construction season and allow for West Lake to be complete this year. But delays in the USCIS petition processing slowed down the project.

USCIS approval of an I-526 Petition is the first step in the process under which an immigrant who invests in an EB-5 program can become a permanent resident of the United States and was the final step needed in order for funds to be released from escrow.