70% of clients are unclear what will happen with Donald Trump as President: Immigration firm 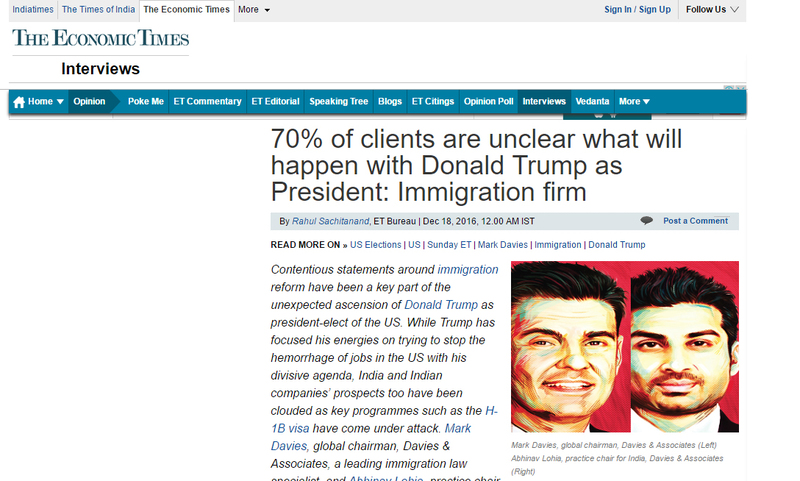 Contentious statements around immigration reform have been a key part of the unexpected ascension of Donald Trump as president-elect of the US. While Trump has focused his energies on trying to stop the hemorrhage of jobs in the US with his divisive agenda, India and Indian companies’ prospects too have been clouded as key programmes such as the H-1B visa have come under attack. Mark Davies, global chairman, Davies & Associates, a leading immigration law specialist, and Abhinav Lohia, practice chair for India, Davies & Associates, tells Rahul Sachitanand that Indian companies often enlist low-cost law firms and pay a steep price in a volatile immigration market. Edited excerpts:

Immigration is a hot button issue at any time of the year in the US. Post elections, how has the debate on immigration shifted vis-a-vis Indians moving to the US?
We see clients from every area you can think of from India who have come to America and have successfully settled down. In terms of the immigration process, sometimes I think it gets a bad rap. And, the reason I think it gets a bad rap is because people file cases that are improperly prepared… The denial rates on visas are a function of incompetent preparedness, not necessarily a negative attitude towards individuals. We bring one new Indian company a week to the US. Indians tend to look for the cheapest service provider and this firm is often not the one doing proper due diligence.

Has the political atmosphere made it harder to work in the area of immigration?
Immigration is getting increasingly complicated. Every day, there are court cases to clarify the law, new regulations and even new laws coming out. Every time you add to this, it becomes more complicated, with different moving parts. If you are an Indian looking to grow a business in the US, and you are a legitimate operating company, US embraces you.

So, is the shrillness around immigration due to Trump’s personality or have you seen this before?
I think you have to divide out the market. Trump himself uses the EB-5 visa program to run his hotels (EB-5 program allows entrepreneurs and their families to apply for a green card if they make the necessary investment in a US enterprise and plan to create or preserve 10 permanent jobs for US workers). And, I don’t think Trump is complaining about a guy from Ludhiana who arrives from India to sell whatever he is selling, opens a warehouse and hires five American workers. I don’t think that is a concern to Trump.

His strategy was to pick up votes from people who typically voted Democrat — the blue-collar workers who voted for the party and telling them their jobs won’t be outsourced anymore. I don’t think what he’s doing is anti-immigration, I think this is politicism around this topic.

Lohia: There has always been a resistance to immigrants in the US. In the last five or six years (in terms of the) number of applications… three times the applications were filed compared to the quota.

For H-1B the quota is 85,000 and in the past two or three years 2,40,000 applications have been filed. This is a perception based issue — 70% of clients worry that they’re moving to the US and with Trump as president they are unclear what will happen. Other statements — like threatening to default on China’s debt — are having a ripple effect on immigration.

There have been a bunch of cases against Indian outsourcers over visa abuse. Do you think companies should be more diligent?
You should be an educated consumer. If you are hiring a law firm to work on L visas, you must ask the right questions — you want to know what experience this person or company has with this program. If I am working with L visas, I want to work with a law firm that has Indian lawyers in it. A firm that is just based in New York and says I am going to do it cheaply may mean you have someone who graduated law school, can’t find a job and is trying to do immigration work cheaper. We see this all the time. We see Indian clients looking for the cheapest solutions and not asking about quality and work that is going to be done and in the end not protecting themselves properly. At the lowest level, you have someone probably speak English and fill up documentation — but the chances of that application being denied are high.

Are Indian companies now becoming more sensitive to handling immigration?
You can’t group India as one market. The educated consumer understands some of these things. There are indeed more people who want to do things properly. Unfortunately, most of the time the way this lands up... we give someone a price, they go to a lower cost provider and it gets denied. Then, it gets worse and gets more expensive because you must fix the mess. If you look at the visas as a one-off transaction, then there are problems ahead for you. You have to get to know a client’s business and that you can’t do that by filling in a form.

The E-B5 program is relatively underreported in India
If I am an Indian entrepreneur or business person, I could use the regional program (tying up $5,00,000 for five years) or I can open a new job and create 10 new jobs. The Chinese have chewed up these visas and maxed out the regional centre programs. If I am a businessman who is wealthy and looking to grow my business, then it opens up a couple of opportunities. First, I can invest in a friend’s factory or business or open my own business. Or, I can do something else. If I want to build a hotel in Miami, I could club this together. We can use this, in theory, to capitalise my business.

Lohia: I filed 35 applications last year and over 100 were filed overall from India. The American E-B5 program costing $0.5 million is cheaper than competing programs from other countries. Second, E-B5 has been around for 26 years, but Indians are just getting used to it and now there’s a targeted plan to target HNIs with this program. Unlike H1 and L1, you have to put in your money, so it’s popular with HNIs with children studying abroad. Conventional visa holders take 14 or 15 years to get a green card, the E-B5 could be as little as two years.