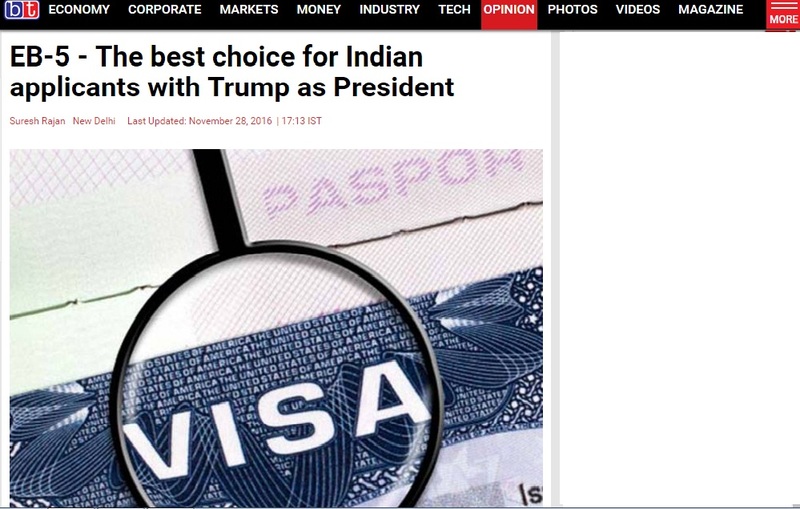 The surprising victory of President-Elect Donald Trump has created a state of uncertainty in the minds of many Indians applying for visas to the United States. Under a Trump administration there will be major changes to immigration policy and a strong likelihood that H1-B reforms will be among the top priorities. That possibility is of major concern to many students and job-seekers who aspire to live and study in the US.

This matter was highlighted by a recent Wall Street Journal article (November 17, 2016) which quoted a leading anti-immigration campaigner as saying, "U.S. President-elect Donald Trump will likely crack down on the use of skilled-worker visas issued to Indian outsourcing firms."

Historically, the US has been the country of choice for Indian immigrants as it offers a large, dynamic economy with physical, legal and regulatory infrastructure ideally configured for young entrepreneurs. However, following the most recent US presidential election, immigrants from around the world are concerned about the challenges they may now face with regard to immigrating to the US.

With the future of many US immigration programmes uncertain, the EB-5 Investment Visa program has become a compelling choice for Indian citizens who aspire to move to the US. An EB-5 visa allows an individual to make an investment of $500,000 through a licensed regional centre to acquire a US Green Card for themselves and their family (including all unmarried children up to the age of 21).

The EB-5 investment must create and sustain ten or more American jobs for a period of two years. Once this has been demonstrated to the US Government, the investor's Green Card residency status becomes permanent for themselves and their families. Long term residency is a requirement for anyone seeking a path to US citizenship. At the end of the five-year investment period the capital can be returned to the investor (usually with a nominal rate of interest) as long as the project that the investor has chosen is successful. Done right, the EB-5 investment visa is the fastest and most secure way to obtain a Green Card.

Donald Trump's victory has taken many people by surprise. For many with aspirations to move to the US, those dreams have become far more uncertain. Fortunately, the EB-5 program is one of the few immigration programmes that have broad support among representatives of America's leading political parties. It has this support because the programme is a proven job creator. It welcomes thousands of legal immigrants from all over the world each year at no cost to the US taxpayer. EB-5 investors and applicants epitomise the type of legal immigration that President-Elect Trump supports.  We believe it will continue to be the best way to immigrate to the US in the foreseeable future.

Having said that, he might put legal immigration in fast track which was derailed by Obama due to turn on left ( illegal).. This is wait & Watch situation