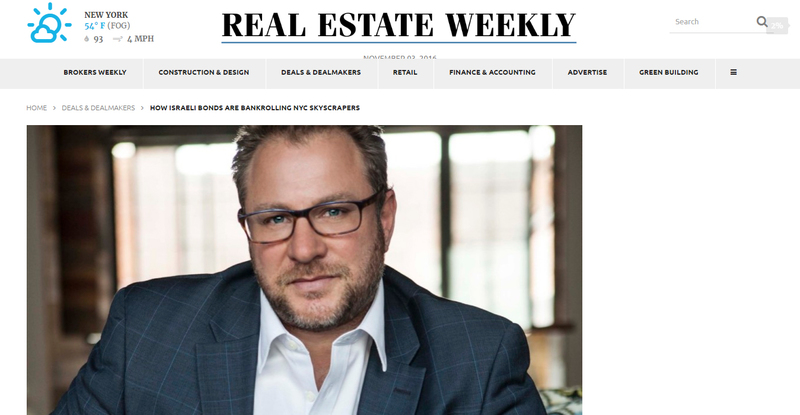 There are multiple billions worth of new developments on one Manhattan block alone, each setting new, unique records and each requiring new, creative ways to finance them.

Before the crash, CMBS was a popular source of debt, totaling $230 billion in activity in 2007. Those days are gone. In the past two years, EB-5 has been all the rage, pumping billions into big US developments — all the while providing a pathway to US citizenship.

Due to concerns of fraud, the EB-5 gravy train could be coming to an end, as well, forcing big players to get creative to get the capital required to erect trophy assets and cash in on the foreign capital inflows.

And the players have been getting creative, tapping into the bond market. The New York Yankees recently refinanced $1 billion, saving them $10 million in interest costs.

However, developers have taken the bond angle a step further, tapping into the Tel Aviv Stock Exchange in Israel for big sums — affectionately known as the “real estate financing land of milk and honey.”

And it’s easy to see why.

Since 2014, real estate players have raised billions at ridiculously low rates via bonds (4-6 percent), providing a desirable alternative to mezzanine capital, which often comes at a double-digit price tag.

Here’s an outtake of some of the biggest debt transactions since the trend kicked off:

Extell, the developer behind the most expensive condo ever, snagged over $400 million at six percent.

Related Companies, the largest owner of luxury real estate in NYC, teamed up with GFI Capital to raise over $200 million.

And as an added incentive: The capital comes unsecured, meaning the lender can’t foreclose on the property to recoup the asset in the event of a default.

Despite the many heavily-publicized deals, there are still a lot of confusion as to how exactly raising the capital works, who can do it. Here are Israeli Bonds, explained.

How exactly can the U.S. real estate companies raise capital in Israel?

Developers select a portfolio of properties that has a minimum asset value of $250 million and minimum shareholder equity of $100 million. The properties should produce cash flow, like rents, in developed countries. The pool of properties are transferred to an offshore entity, forming segregated portfolio company with a portion of the developer’s assets with its own balance sheet, allowing it to spread out the risk.

How long is the process?

The initial bond issuance takes around five months, about half the time of EB-5 funds, the favored low-cost capital source for developers. For extensions and secondary offering after that, it takes up to a month — sometimes as little as two weeks.

“Access to quick capital is an incredibly valuable position for a developer,” said Philip Michael, who runs New York Equity Group, a private equity real estate firm with $25 million in AUM. “The players can get creative with their financing and the capital stack — especially with partners involved. That’s huge.”

What are some of the advantages of raising debt in Israel?

The bonds trading on Tel-Aviv Stock Exchange (TASE) is NOT secured. Investors, such as Israeli institutional investors, would receive income (call it a dividend) generated by the pool of properties.

Because the portfolio is backed in an offshore entity — Related and GFI sold the debt backed against a Virgin Islands’ entity called “Related Commercial” — developers can raise unsecured capital with no tax implications.

“That’s really what’s opened up the floodgates to Tel Aviv,” said Steven Christmann, head of New York City-based Christmann & Gutermann, a family office with $6 billion in AUM.  “We don’t see rates like that anywhere, especially not for unsecured debt.

“After the 421 ended, everyone’s terrified of what could happen with EB-5. You have to realize, a lot of big developers still need to come up with money to pay construction loans on big projects and the banks aren’t as eager to step in. And that’s why they’re going over there.”

How the money’s raised – and why?

From the investor point of view, it’s a matter of supply and demand. The liquidity in the Israeli corporate bond market is higher compared with its stock market and with the U.S. stock market.

In other words, the spread is lower, suggesting higher demand for the bonds by the investors with enough available of securities.

Or in layman’s terms, there’s too much capital and not enough bonds. So on top of the investable capital in Israel, U.S. real estate firms face a favorable credit rating landscape. For instance.  U.S. company with ‘BB’ rating can receive a rating of ‘A’ in Israel.

So what’s the catch?

While not a “catch” per se, there’s a significant process before any developer or investor can cash in on the cheap capital. For one, any US company that wants to issue an IPO in Israel has to file a prospectus with the Israel Securities Authority (ISA), the Israeli equivalent of the SEC. The entity also has to be audited by a local accounting firm under the International Financial Reporting Standards (IFRS).

“The initial process can take four-to-five months, sure,” Joe Berko, head of Berko & Associates, one of the main US Israeli bonds dealmaker, said. “But it’s well worth it, especially for the flexibility. Once you’ve filed the first IPO on the TASE, additional raise of capital can be done in a matter of days.”

There’ve also been concerns about making asset details public. But that’s not a factor of concern for the low-key moguls, Berko said.

“The prospectus is in Hebrew, for one, and the informations and audited reports are only on the portfolio of assets the client chose to bond — not the US entity of any of its officers,” he said “That’s where the true magic happens.”