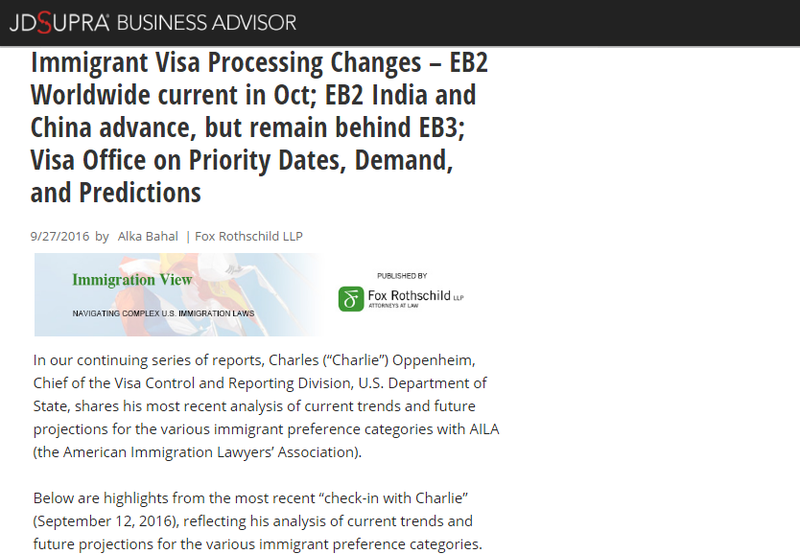 In our continuing series of reports, Charles (“Charlie”) Oppenheim, Chief of the Visa Control and Reporting Division, U.S. Department of State, shares his most recent analysis of current trends and future projections for the various immigrant preference categories with AILA (the American Immigration Lawyers’ Association).

Below are highlights from the most recent “check-in with Charlie” (September 12, 2016), reflecting his analysis of current trends and future projections for the various immigrant preference categories.

This month, Charlie offers his analysis of current trends and future projections for the various immigrant preference categories for the beginning of the next fiscal year (October 2016) and beyond.

EB-4 and Certain Religious Worker (SR) Preference Categories. As predicted last month, the final action dates for EB-4 India and EB-4 Mexico will be current again in October and the priority dates for EB-4 El Salvador/Guatemala/Honduras will advance to June 15, 2015. While Charlie considered establishing a separate final action date for Guatemala and Honduras due to the higher demand for numbers from El Salvador, all three countries are expected to exceed the per country limitation and rely on the availability of “otherwise unused” EB-4 numbers. Thus, Charlie confirmed that the three countries will continue to be reported together throughout FY 2017.

It is expected that EB-4 India and EB-4 Mexico will remain current for the foreseeable future, until at least late spring, early summer 2017. EB-4 El Salvador/Guatemala/Honduras is expected to advance modestly, by no more than two months at a time in a best case scenario. Charlie notes that there is likely more demand in this category at USCIS to which he does not yet have visibility, so his predictions may change depending on the rate at which such demand begins to materialize.

EB-4 religious workers will be unavailable in October, pending congressional action to reauthorize the program beyond September 30, 2016. Should that occur, El Salvador/Guatemala/Honduras would be subject to a June 15, 2015 final action date, and all other countries would be current.

EB-1 China and India. In October, the EB-1 final action date for all countries will return to current. Due to the brief imposition of a final action date in India and China at the end of FY 2016, there will be high usage in these categories in October. EB-1 India and China can be expected to remain current for the foreseeable future. Charlie will continue monitor this category closely during the second half of the fiscal year if demand remains high.

EB-2 and EB-3. As predicted, EB-2 Worldwide will again be current in October and ahead of EB-3 Worldwide which will have a final action date of June 1, 2016. As there is pent up demand in EB-2 Worldwide due to the retrogression, visa usage in this category will be high in October. Charlie will monitor this category closely during the final quarter of the fiscal year.

Consistent with Charlie’s predictions, in October, EB-2 China will have a final action date of February 15, 2012, almost one year behind EB-3 China’s final action date of January 23, 2013. Thus, the EB-3 downgrade phenomenon should once again be expected for FY2017. Charlie did not advance either of these final action date to the full number use target given the likelihood of demand at USCIS that is not yet visible and to minimize the need for corrective action later in the fiscal year. Charlie hopes to keep the final action dates for EB-2 and EB-3 China as close to one another as possible.

Also consistent with Charlie’s predictions, the final action date for EB-2 India will advance to January 15, 2007 in October. Charlie expects this category will advance at a pace of up to four months at a time. Slower movements of up to a week at a time are anticipated for EB-3 India, which will advance to a March 1, 2005 final action date in October. Number usage for EB-3 India is expected to be high in October, which will decrease the amount of numbers Charlie can allocate in November and December and slow the advancement of this category.

EB-5 China. EB-5 China non-regional centers will have a final action date of February 22, 2015 in October. EB-5 China regional centers will be “unavailable” in October pending Congressional reauthorization of the program beyond September 30, 2016. Should this category be reauthorized, the final action date will be set at February 22, 2014. So as not to completely halt visa processing in October, DOS has set tentative Immigrant Visa appointments for the second half of October, which will be remain scheduled in the event that Congress reauthorizes the program.