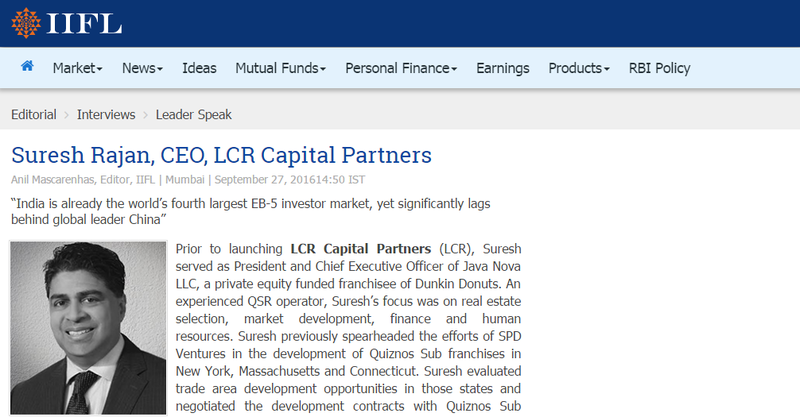 Prior to launching LCR Capital Partners (LCR), Suresh served as President and Chief Executive Officer of Java Nova LLC, a private equity funded franchisee of Dunkin Donuts. An experienced QSR operator, Suresh’s focus was on real estate selection, market development, finance and human resources. Suresh previously spearheaded the efforts of SPD Ventures in the development of Quiznos Sub franchises in New York, Massachusetts and Connecticut. Suresh evaluated trade area development opportunities in those states and negotiated the development contracts with Quiznos Sub corporate. Suresh managed the stem to stern development of SPD Ventures’ Quiznos Sub efforts and in doing so established numerous national sales and development records for that brand. Before entering the QSR sector, Suresh had an extensive career in management consulting and politics. As a McKinsey & Company consultant, Suresh worked primarily in the areas of strategy development, principal investing/mergers and acquisitions, warehousing & distribution and ecommerce. Suresh served a variety of clients that were leaders in the media, telecom, pulp & paper, petroleum and optical industries. He was the first Executive Director of Washington, D.C. – based John Quincy Adams Society and served as a policy advisor for several members of Congress. Suresh served as a negotiator on several international trade agreements (including GATT and NAFTA), recruited candidates to run for political office and assisted in the development of their congressional campaigns, and helped develop legislation affecting the banking, telecom, and healthcare industries. He received a B.A. in Political Science and International Relations from the University of Southern California and a Master in Business Administration in General Management from Harvard Business School.