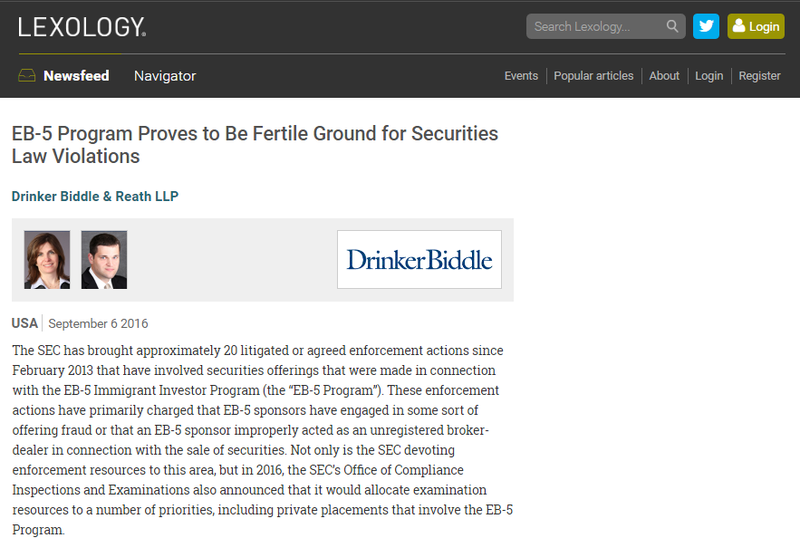 The SEC has brought approximately 20 litigated or agreed enforcement actions since February 2013 that have involved securities offerings that were made in connection with the EB-5 Immigrant Investor Program (the “EB-5 Program”). These enforcement actions have primarily charged that EB-5 sponsors have engaged in some sort of offering fraud or that an EB-5 sponsor improperly acted as an unregistered broker-dealer in connection with the sale of securities. Not only is the SEC devoting enforcement resources to this area, but in 2016, the SEC’s Office of Compliance Inspections and Examinations also announced that it would allocate examination resources to a number of priorities, including private placements that involve the EB-5 Program.

The EB-5 Program. Congress created the EB-5 Program, which is sponsored by the U.S. Citizenship and Immigration Services (“USCIS”), in 1990 to stimulate the U.S. economy and to provide foreign investors with a potential path to US residency. To qualify to apply for residency under this program, a foreign investor is required to make a qualified capital investment in a new U.S. commercial enterprise or a business project designated by USCIS as a “regional center” that is designed to create or preserve at least 10 permanent, full-time jobs for U.S. workers. Although the designation of a business opportunity as a “regional center” does not mean that either USCIS or the SEC approved of the quality of the investments that are offered by the business, the majority of EB-5 investments are made through one of these approved regional centers.

A foreign individual who invests in a fraudulent securities offering may lose the opportunity to obtain legal residency (and her initial investment) if the investment does not result in the creation of any jobs. Therefore, the SEC and the USCIS are on high alert for these types of scams and, in an effort to stop these offerings, are cooperating to send the message that violators will be prosecuted.

Examples of Actions that Involved Offering Fraud. On April 14, 2016, the SEC filed one of the most significant enforcement actions to date. In a 52-count complaint filed in the U.S. District Court for the Southern District of Florida against a Vermont-based ski resort, its owners, and its related businesses (in addition to several relief defendants), the SEC alleged violations of the antifraud provisions of Section 17(a) of the Securities Act of 1933 (the “Securities Act”) and Section 10(b) and Rule 10b-5 of the Securities Exchange Act of 1934 (the “Exchange Act”), for control person liability pursuant to Section 20(a) of the Exchange Act, and for aiding and abetting. Press Release 2016-69. The complaint alleged that the individuals and entities were engaged in a “massive eight-year fraudulent scheme” that used the EB-5 program to attract more than 700 foreign investors to finance the development of a ski resort and a biomedical research facility. Compl. ¶ 1, SEC v. Quiros, No. 1:16-CV-21301.

Of the $350 million that the defendants raised, they misused more than $200 million. Although the investors were told that their investments would fund a specific project, their investments instead went to funding deficits in earlier projects “in Ponzi-like fashion.” Press Release 2016-69. According to the SEC, the owner of the resort used a significant portion of the misused investments to “(1) finance his purchase of the [Vermont] resort; (2) back a personal line of credit to pay his income taxes; (3) purchase a luxury condominium; (4) pay taxes of a company he owns; and (5) buy an unrelated resort.” Compl. ¶ 4, Quiros, No. 1:16-CV-21301.

The defendants’ several misrepresentations and material omissions prompted the SEC to ask for preliminary and permanent injunctions, financial penalties, and disgorgement of ill-gotten gains plus interest, along with conduct-based injunctive relief against the owner of the resort and the CEO of the resort, and an officer-and-director bar against the owner of the resort. There are other examples of these types of actions. See, e.g., Press Release 2016-105 (announcing “fraud charges and an asset freeze against a husband and wife accused of misusing two-thirds of the money they raised from investors for the purpose of building and operating a new cancer treatment center”), Lit. Release 23409 (announcing court order to freeze assets of individual and her company after she was accused of using money raised from investors to purchase a boat and luxury cars), and Lit. Release 23077 (announcing charges against individuals who “conduct[ed] an investment scheme to defraud foreign investors” by misappropriating funds that were raised for an ethanol production plant that was never built and never created jobs).

Example of Unregistered Broker-Dealer Violations. In June 2015, the SEC shifted its focus from fraud and filed an action against unregistered brokers that facilitated EB-5 investments. Press Release 2015-127. The SEC alleged that Ireeco, LLC, and its successor, Ireeco Limited, acted as unregistered brokers for more than 150 foreign investors. The two businesses solicited EB-5 investors through Ireeco, LLC’s Web site and told investors that they would be matched with a regional center on the basis of their immigration status and their investment preferences. In reality, the businesses were directing investors to a small handful of regional centers that paid the businesses a commission per investor. In total, they placed $79 million in investments in regional centers.

The SEC alleged that this conduct violated Section 15(a)(1) of the Exchange Act because neither Ireeco, LLC, nor Ireeco Limited was registered as a broker-dealer or was associated with a registered broker-dealer in these securities transactions. Without admitting or denying the SEC’s findings, the respondents agreed to cease and desist from committing or causing any further violations of Section 15(a), to be censured, and to additional administrative proceedings to determine whether disgorgement of ill-gotten gains and/or civil penalties would be appropriate based on their violations. Release No. 75268. On May 12, 2016, the SEC affirmed the ALJ’s order that Ireeco, LLC, pay disgorgement of $1,700,000 plus prejudgment interest and that Ireeco Limited pay disgorgement of $1,479,633.85 plus prejudgment interest. Release No. 77824.

The Ireeco, LLC, case is not an isolated one. See, e.g., Press Release 2015-274 (announcing series of enforcement actions against law firms and lawyers nationwide for offering EB-5 investments without being registered to act as brokers) and L.R. 23298 (announcing administrative proceedings in which respondents agreed to settle charges that they acted as unregistered brokers in the sale of securities).

These cases highlight the recurring issues that the SEC is focusing on in the EB-5 context. The SEC’s Office of Investor Education and Advocacy and USCIS jointly published an investor alert to help prevent more individuals from falling victim to exploitations of the EB-5 program. Given that securities violations in connection with EB-5 Program offerings are a priority for 2016, EB-5 sponsors, including regional centers, broker-dealers, and other securities issuers, should expect SEC enforcement proceedings in this area to remain prevalent.