Global Future City Holding Inc. (OTCQB:FTCY) (the "Company") announced in the first quarter of 2015, the shareholder equity component of the Company's consolidated balance sheet increased by $5,677,449.

The change in the balance sheet was due to the newly-appointed CEO, Mr. Lei Pei, purchasing 6,000,000 newly-issued shares of the Company's common stock for $3,000,000. In March 2015, the Company purchased 100% of the membership interests in Powerdyne to expand its business scope to real estate development and has plans to raise funding for real estate development projects through an EB-5 Regional Center, a vehicle designated by the U.S. Citizen and Immigration Service as eligible to receive immigrant investor capital to promote economic growth, improve regional productivity, create jobs, and increase domestic capital investment. The purchase price of the EB-5 Regional Center was $250,000, $150,000 of which was contributed by Mr. Pei and paid to date.

The first quarter financial statements included debt forgiveness by the Company's former CEO, Michael Dunn, and its former Controller resulting in the contributed capital recording of $1,673,774. Additionally, the Company recorded a gain on extinguishment of debt for the three months ended March 31, 2015 that was attributable to settlements, write-offs of accounts payable, accrued expenses, notes payable and accrued payroll taxes. 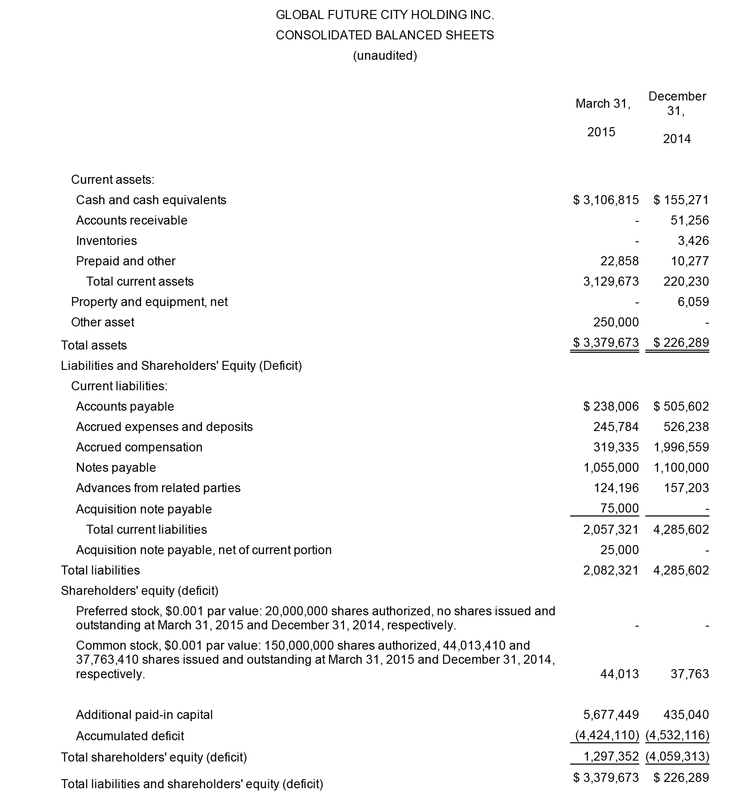 Global Future City Holding, Inc. (OTCQB:FTCY) (the "Company"), is currently a holding company focused on implementing an EB-5 immigrant investor program for foreign investors who are interested in acquiring lawful permanent residence in the United States, and the marketing and deployment of an EGD loyalty-based retail program. As a result of recent transactions with Sky Rover Holdings, Ltd. ("Sky Rover") and the acquisition of a designated EB-5 regional center approved by the USCIS ("EB-5 Subsidiary"), the Company intends to expand its operations into several new areas. The Company plans to focus its initial efforts on acquiring real estate projects that will fit the purchase of the recently acquired EB-5 Subsidiary and the development of its loyalty program using its recently acquired E-Gold crypto-assets ("EGD"). The Company intends to ultimately have six (6) wholly-owned operating subsidiaries once audits are completed. Of the six (6) intended subsidiaries, two (2) have been incorporated as of the date of this press release, two (2) are not yet subsidiaries of the Company but may be pending the satisfactory audit of the entities, and two (2) have not yet been incorporated. Ultimately, the Company intends to drive its EGD loyalty-based retail program through retail sales via its Merchant, Energy Drink and Mobile Subsidiaries with the Software support of its IP Subsidiary and the asset-based financial support of its EGD Subsidiary (collectively, the "Proposed Business Model").

The Company has also recently formed Global Modern Enterprise Limited ("EGD Subsidiary"), a Hong Kong entity, which was transferred 4,000,000 EGD acquired in the Sky Rover Stock Purchase Agreement, and plans to begin selling this EGD only to foreign individuals and entities located outside the United States. Initially, the EGD Subsidiary will operate mainly to provide financial support to the Company's operations.

This release contains "forward-looking statements" that include information relating to future events and future financial and operating performance. The words "may," "would," "will," "expect," "estimate," "can," "believe," "potential" and similar expressions and variations thereof are intended to identify forward-looking statements. Forward-looking statements should not be read as a guarantee of future performance or results, and will not necessarily be accurate indications of the times at, or by, which that performance or those results will be achieved. Forward-looking statements are based on information available at the time they are made and/or management's good faith belief as of that time with respect to future events, and are subject to risks and uncertainties that could cause actual performance or results to differ materially from those expressed in or suggested by the forward-looking statements. Important factors that could cause these differences include, but are not limited to: the Company pursuing digital currency, which could have fluctuations in demand and pricing, the introduction and impact of new competitive products or digital currency, the Company's ability to maintain customer and strategic business relationships, growth in targeted markets, and other information that may be detailed from time-to-time in the Company's filings with the United States Securities and Exchange Commission. For a more detailed description of the risk factors and uncertainties affecting the Company, please refer to the Company's recent Securities and Exchange Commission filings, which are available at www.sec.gov. The Company undertakes no obligation to publicly update or revise any forward-looking statements, whether as a result of new information, future events or otherwise.