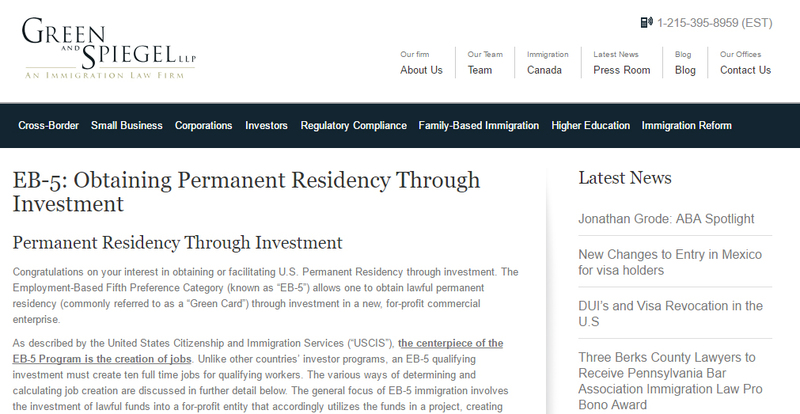 Congratulations on your interest in obtaining or facilitating U.S. Permanent Residency through investment. The Employment-Based Fifth Preference Category (known as “EB-5”) allows one to obtain lawful permanent residency (commonly referred to as a “Green Card”) through investment in a new, for-profit commercial enterprise.

As described by the United States Citizenship and Immigration Services (“USCIS”), the centerpiece of the EB-5 Program is the creation of jobs. Unlike other countries’ investor programs, an EB-5 qualifying investment must create ten full time jobs for qualifying workers. The various ways of determining and calculating job creation are discussed in further detail below. The general focus of EB-5 immigration involves the investment of lawful funds into a for-profit entity that accordingly utilizes the funds in a project, creating jobs in accordance with the EB-5 rules and regulations.

An EB-5 investor must show the lawful sources of his/her invested funds. An investor need not necessarily evidence the acquisition of his or her entire net worth. Instead, the focus is on how the investor acquired the EB-5 capital to be invested and to trace its ultimate path from its source to the new commercial enterprise. Because the burden of proof is on the investor, extensive documentation relating to investment must be included in the initial petition documents. Under current law, unrestricted gifts to the investor are allowed, however the investor must personally possess the capital and make the EB-5 investment. The focus in such cases shifts to how the giftor acquired his/her gifted capital.

The current minimum investment amount is $1,000,000 of capital, which is usually a cash investment. However, this minimum investment amount is halved to $500,000 if the investment is made into a project that is principally doing business in a Targeted Employment Area (“TEA”). Under the regulations, a TEA is defined as a rural area, or designated area that experienced 150% of the national unemployment rate. The regulations bestow a great deal of discretion upon individual state agencies in defining the relevant area facing high unemployment. Accordingly, most EB-5 projects are able to leverage the lower threshold investment amount, as project principals and attorneys work closely with state agencies. Our team at Green and Spiegel has such extensive experience coast-to-coast.

Note that whether the lower threshold investment applies is purely a matter of geography: it does not matter whether an investor is utilizing a “Regional Center” or “Direct” EB-5 Investment. While most Regional Centers offer $500,000 investments, they need not necessarily do so. Likewise, Direct investments may also utilize lower thresholds if the applicable criteria are met.

The vast majority of EB-5 investors receive their permanent residency through an investment made in a “Regional Center.” A Regional Center is a specific entity focused on stimulating economic activity through EB-5 investment. Each Regional Center has received approval and licensure from USCIS following a rigorous application process and must undergo annual compliance procedures. A niche industry, there are over 800 approved Regional Centers, which are listed on the USCIS web site.

The main benefit of a regional center investment is its ability to utilize indirect job creation. Generally speaking, regional center investments utilize economic modelling to measure the job creation of the EB-5 Project’s activities. Unlike “Direct” EB-5 investments, the relevant Regional Center entities need not hire any employees. Accordingly, this allows for greater flexibility in the use of EB-5 funds and the ability for the Regional Center to aggregate larger amounts of investors, provided that total job creation is equal to or greater than 10 jobs per investor. The economic modelling generally caps the amount of investors that may subscribe to a particular project.

Typically, EB-5 investors utilizing regional center investments have a relatively less active role in day-to-day management. Usually, they are admitted to their respective new commercial enterprises as limited partners or non-managing limited liability company members and retain minimal voting and advisory rights. EB-5 funds are usually part of a larger capital stack and total job creation can be measured by examining all impacts of a project, not just EB-5 funds.

Regional Centers generally have dedicated staff and legal counsel tasked with creating the specific project offering documents that are mostly uniform across investors. Because the EB-5 capital must be deployed to job creation, Regional Centers typically charge an administrative fee of 10-15% of the investment amount to recoup their overhead expenses. The Regional Center program is not currently a permanent facet of the immigration system and must be periodically renewed by the U.S. Congress.

Although a minority of EB-5 filings, Direct EB-5 investments may present an option for the more entrepreneurially-minded immigrant. Direct investments are unaffiliated with Regional Centers. Any lawful, for-profit business can be utilized for EB-5 provided that all regulatory requirements are met. Unlike Regional Center investments, a Direct EB-5 investment must be made in a new commercial enterprise that itself (or through a wholly-owned subsidiary) hires W-2 employees. Employees resulting from a Direct Investment must have the requisite immigration status and work full-time, which is defined as 35 hours a week or more. It is very common for restaurateurs, consultants, and entrepreneurs opening smaller businesses to utilize EB-5 for a direct investment. Further, some foreign nationals may also be able to qualify for an E-1 or E-2 nonimmigrant visa in conjunction with pursuing the EB-5 Green Card.

Further, some projects are offered on the marketplace as “Pooled Direct” investments. Similar to a Regional Center, these project principals seek to aggregate EB-5 investors and admit them in relatively limited roles. Utilizing direct job creation, capital is deployed by the new commercial enterprise and/or its wholly-owned subsidiaries to hire employees. While not as scalable as a Regional Center, this model is common for franchises and manufacturing which require relatively larger direct hiring. Again, the requisite job creation of 10 full-time jobs per investor must be met.

The Direct type of EB-5 investment is a permanent part of the Immigration and Nationality Act. While immigration laws are always subject to change, it is not subject to a sunset date.

Unlike most types of employment-based immigration, EB-5 requires a three-step process to securing an unconditional, 10-year Green Card.

Step One – Form I-526: In this first step, an investor generally needs to present information that s/he has or is in the process of investing the required capital in an EB-5 project that meets the regulations. The I-526 requires submission of an EB-5 compliant business plan and supporting documentation substantiating that qualifying job creation is more likely than not to occur. Further, the investor must show the lawful source(s) of the capital investment. Unlike other types of immigration processes, an investor cannot currently file I-526 and apply for a Green Card at the same time. Rather, the I-526 must be approved before commencing the second step.

Step Two–Adjustment of Status or Application for an Immigrant Visa: Once the I-526 is approved, an investor, spouse, and unmarried children under the age of 21 may pursue permanent residency. Depending upon the investor’s status, this may be done in the United States through a process called “Adjustment of Status” or abroad through a process called “Consular Processing.”

If an investor is in lawful nonimmigrant status in the U.S. and EB-5 visas are available, s/he may file Form I-485 to adjust status to a lawful permanent resident. Upon filing of this form, the applicant is granted authorized stay in the U.S. independent of an underlying status, such as a student or work visa. The applicant may also apply for ancillary benefits, such as work and travel authorization, while awaiting adjudication of the Green Card. There usually is no personal interview unless there are questions relating to the applicant’s admissibility.

If the investor resides abroad, does not qualify to adjust status, or prefers to handle the process outside of the U.S., s/he may pursue Consular Processing. In this procedure, USCIS sends the investor’s file to the Department of State after I-526 approval. Through the National Visa Center, the investor and qualifying family members must complete a comprehensive online Immigrant Visa Application (Form DS-260) and submit supporting documentation. Once a visa is available, all applicants must appear at a consulate abroad for an interview. The consulate then prints immigrant visas in each person’s passport. The applicants must then enter the U.S. during the validity period of the visa and pay a fee for the Green Card. At this point lawful permanent residency is achieved, although the Green Cards themselves may take months to print.

Practically all Green Cards in the immigration system are valid for 10 years and can be renewed with relatively little documentation. However, an EB-5 Green Card is conditioned upon the satisfactory completion of the third step. This is commonly referred to as Conditional Permanent Residence or CPR, where a petition to remove the conditions must be filed before expiry.

Step Three – Form I-829: Within 90 days of the expiration of the Conditional Green Card, an investor and associated family members must file Form I-829 to remove conditions. In this petition, the investor must present evidence that (1) a new commercial enterprise was established; (2) the investor invested or was in the process of investing the required capital; (3) that the enterprise and capital investment was sustained during the period of conditional residency, and (4) that the requisite jobs were created or can be expected to be created within a reasonable time. Looking back to the I-526, this petition process generally requires submission of tax and business documentation, evidence that the business plan was executed, and proof that the economic model was sufficiently met or the requisite hires were made (as applicable). Following successful adjudication of Form I-829, the investor and family members are issued permanent, 10-year Green Cards. At that time, the investments may be redeemed in accordance with the offering documents governing the EB-5 project. The immigrants may also optionally pursue U.S. citizenship once they qualify.