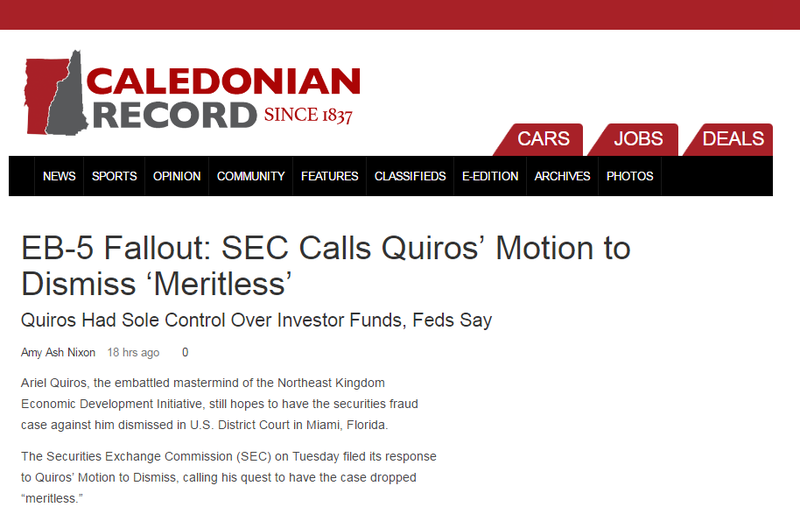 Ariel Quiros, the embattled mastermind of the Northeast Kingdom Economic Development Initiative, still hopes to have the securities fraud case against him dismissed in U.S. District Court in Miami, Florida.

The Securities Exchange Commission (SEC) on Tuesday filed its response to Quiros’ Motion to Dismiss, calling his quest to have the case dropped “meritless.”

In a 40-page response filed in Miami, the SEC’s legal team calls Quiros’s motion “nothing more than a mix of incorrect legal assertions.”

Quiros, who was involved in seven partnerships across northern Vermont at Burke Mountain, Jay Peak and beyond – sought dismissal of the case from several points – including statute of limitations and alleging issues of fact.

The court granted Quiros until Sept. 2 to respond to the SEC’s arguments against his dismissal effort.

The SEC asserts right off that its case against Quiros – and his partner in the EB-5 empire, Bill Stenger – is solid and has “easily satisfied the minimal requirements for pleading injunctive relief and disgorgement of ill-gotten gains.”

According to the response, “None of Quiros’ arguments are supported by the case law he cites … his claims run contrary to well-established securities law standards and demonstrate a vast misunderstanding or erroneous assertions of what the law requires.”

The response charges that “Quiros has fabricated out of whole cloth,” the claim the SEC must specify what disgorgement of assets it seeks or the factual basis for injunctive relief in each count in the case.

The pair were accused in mid-April by both the SEC and the State of Vermont of orchestrating a Ponzi-like scheme to defraud immigrant investors who had pledged more than $350 million to fuel the economic development projects promised to bring a renaissance to the struggling rural Northeast Kingdom.

Quiros and Stenger both were implicated in allegations of having misappropriated some $200 million of the investors’ money; Quiros further is accused of pocketing more than $50 million in additional foreign investment pledges to fuel his lavish lifestyle, which state and federal authorities have detailed in court documents. Among the purchases he used the funds for, allegedly, are two high-end condominiums in New York City.

In his motion to dismiss, Quiros had tried to distance himself from the actual securities offering documents made to investors, as a piece of his defense.

According to the SEC, “…the Commission has properly pled facts showing Quiros is liable for misrepresentations and omissions (in those offerings to the EB-5 investors), scheme liability, and a fraudulent course of conduct.”

Quiros is also seeking dismissal under the Federal Rules of Civil Procedure.

The SEC response notes that “his motion engages in no discussion of the high burden he must meet to warrant a dismissal.”

Quiros had also pressed for the SEC to specify the relief they would seek in each of the counts brought against him, and the SEC’s recent filing states they are not obligated to provide that at this point in the complaint process. It is premature for that level of specificity, the SEC response states.

To the disgorgement issue, the federal response states, “…the Amended Complaint alleges facts which would allow the Commission to pursue disgorgement claims or acts that started more than five years before the filing of the Amended Complaint, but has continued into the five-year period. This included, among other things, paying off and paying down the margin loans…using Phase I and Phase II investor funds to purchase Jay Peak, which caused shortfalls that culminated in no money to finish Phase VI and build Phase VII.”

In its case against Quiros, the SEC states, it provided information about how the defendants, “…including Quiros, offered and sold the limited partnership interests to investors around the world, the time frames of each offering, and the specific fraudulent acts Quiros committed in addition to the misrepresentations and omissions he made.”

The SEC response alleges that Quiros committed “numerous and deceptive acts…(which) enabled Quiros to use investor funds improperly in violation of how the offering documents described the use of funds.”

The SEC urged the court to deny Quiros’ motion to dismiss.