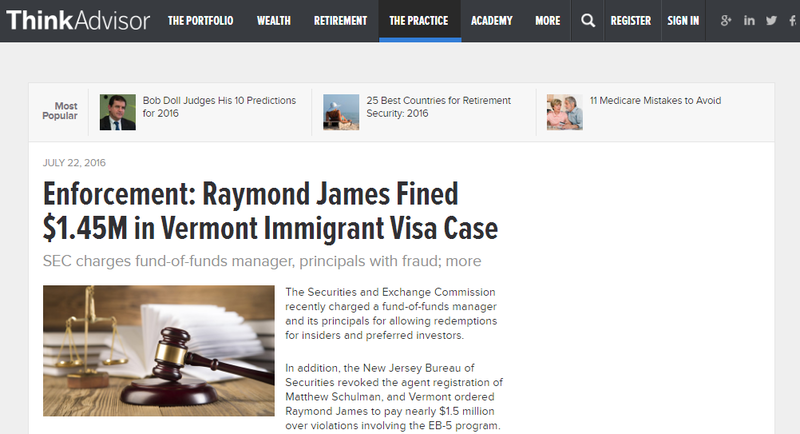 The Securities and Exchange Commission recently charged a fund-of-funds manager and its principals for allowing redemptions for insiders and preferred investors.

In addition, the New Jersey Bureau of Securities revoked the agent registration of Matthew Schulman, and Vermont ordered Raymond James to pay nearly $1.5 million over violations involving the EB-5 program.

The Securities Division of the Vermont Department of Financial Regulation has ordered Raymond James & Associates to pay penalties totaling $1.45 million, after the DFR found that a Raymond James registered representative allowed misuse of investor funds in a case involving the EB-5 program, which allows foreign investors to pursue a legal path to permanent residency in the U.S. through the investment of at least $500,000 in projects that create a certain number of jobs in an economically targeted area, often a rural or economically depressed area.

From 2008 through 2014, Ariel Quiros and Stenger used bank accounts, as well as brokerage and margin accounts at RJA, to transfer the limited partnership funds to and from different partnerships or entities. Throughout this period, a registered representative was assigned to the RJA accounts.

In or about June 2008, Quiros had the representative open several brokerage accounts and at least four margin accounts at RJA for Quiros, several limited partnerships under his financial control and other entities connected with the Jay Peak ski resort in Vermont. RJA failed to obtain adequate documentation establishing Quiros’ authority to act on behalf of the limited partnerships.

The representative knew, or should have known, that some of those transfers had no legitimate purpose, and that greater due diligence would be appropriate, but none was exercised. In addition, the representative ignored written supervisory procedures regarding funds transfers, prohibiting text message communications with clients without prior supervisory approval and cross-collateralization of margin loans.

On May 5, RJA executed an acceptance, waiver and consent agreement with FINRA arising from the failure to establish and implement adequate AML controls. The registered representative and his supervisor have withdrawn their registrations as broker-dealer agents in Vermont, and the consent order provides for the penalty, of which $1.25 million represents an administrative penalty and the remaining $200,000 is to reimburse the DFR for its costs.

From 2010 through late 2014, Conrad directed preferential redemptions and other disbursements to himself, his son Stuart, extended family and some favored investors, while telling other investors that redemptions were suspended. He also failed to disclose to investors certain fees he received for his purported management of the funds and related conflicts of interest and also hid his disciplinary history.