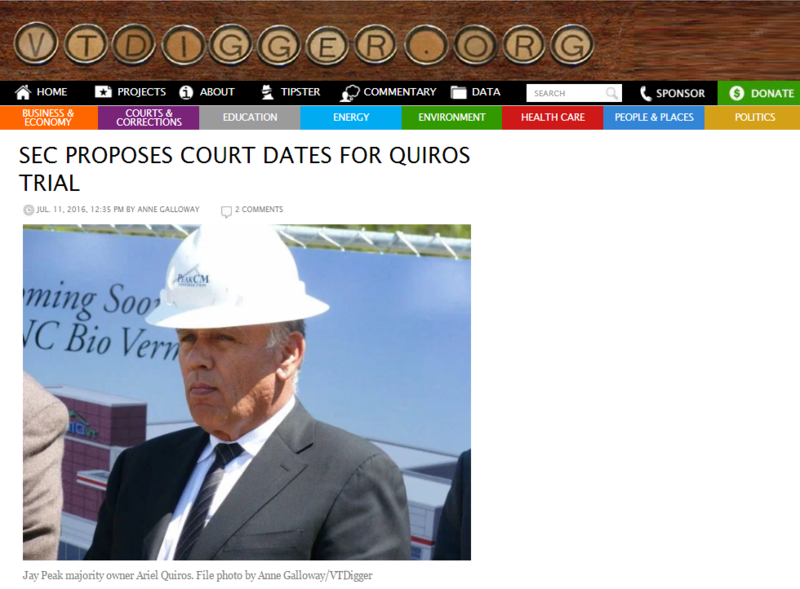 The Securities and Exchange Commission is proposing court dates for the litigation of charges against Ariel Quiros, a Miami businessman who is accused of stealing more than $55 million from immigrant investors in the Jay Peak projects.

The SEC filed a scheduling report last week with the U.S. District Court in Miami, based on a conference call with defense attorneys June 24.

Attorneys for the federal regulator have requested the trial start in October 2017. The SEC wants an immediate start to discovery, a process in which defense and plaintiffs attorneys gather documents and depositions.

Quiros’ attorney David Gordon says discovery should not move forward until U.S. District Judge Darrin Gayles issues a decision on the defense’s motion to dismiss the case. Gordon says the trial should start at least 19 months after the start of discovery.

Other parties on the conference call included Stephanie Casey, the defense attorney for Bill Stenger, Quiros’ former business partner. Stenger is accused, along with Quiros, of misusing $200 million out of $350 million that immigrants invested in their projects under the EB-5 visa program. The SEC says Stenger made misrepresentations to investors and, as general partner for seven development projects, abdicated his responsibility to protect immigrant investor funds.

Both of the Jay Peak developers have been charged with 52 counts of federal securities violations, including wire fraud. The alleged fraud is the subject of separate state litigation and an investigation by the FBI.

Stenger’s attorney and SEC attorneys have said the former CEO and president of Jay Peak is likely to reach a settlement with the federal regulator. Stenger has been cooperating with the SEC since charges were filed in mid-April.

Quiros, on the other hand, has fought the SEC charges in court. In a statement to the court, Robert Levenson, a litigator for the SEC, said the commission and Quiros “anticipate discussing settlement possibilities, but do not believe settlement at this time is likely.”

The SEC, Stenger’s attorney and an attorney representing Michael Goldberg, the court-appointed receiver for the EB-5 hotel and condo projects at Jay Peak Resort, Burke Mountain Resort and AnC Bio Vermont, are all in agreement that discovery should begin immediately. They propose that initial disclosures be made no later than Aug. 19.

Quiros, through his attorney, says disclosures should not be made until after the court decides on his motion to dismiss the SEC case.

If Gayles approves the SEC’s timeframe, the discovery process would take nine months from the time of the scheduling conference June 24 and would be complete March 24.

Gordon pushed back on the discovery schedule and says he will need additional time to gather information “regarding the complicated factual matters in this matter from third parties, including some third parties in foreign countries and entities now subject to the receivership.”

Gordon complains the SEC has had a three-year “head start” on gathering information. In addition to more time for gathering factual information, Gordon has asked for a four-month period for expert discovery after fact discovery.

The defense attorney says Goldberg, the receiver, has electronic business records and “certain privileged documents” that should be returned to Quiros promptly.

Goldberg says he doesn’t have any of Quiros’ personal records. Although Goldberg told the court he does have certain privileged documents for the receivership entities, “any privilege associated with those documents is held by the receiver and not Mr. Quiros.”