Sec In 'Serious' Settlement Talks With Stenger, Says His Lawyer 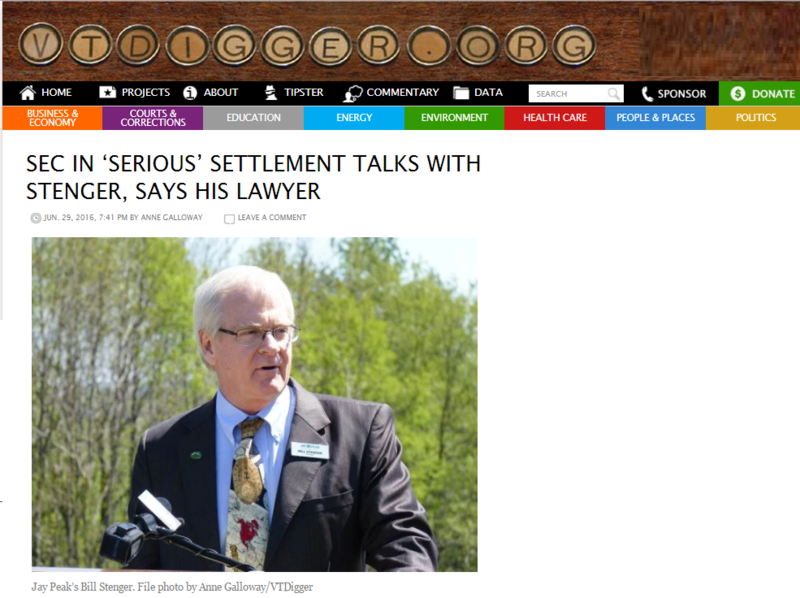 The former CEO of Jay Peak is “in the midst of serious, detailed settlement discussions” with the Securities and Exchange Commission, according to a court filing by his lawyer.

Bill Stenger has cooperated with the SEC since mid-April when federal regulators filed charges against him and his business partner, Ariel Quiros, in the U.S. District Court of Southern Florida in Miami.

For a second time, Stenger is asking to delay a response to SEC allegations that he abdicated his fiduciary duty, made misrepresentations to more than 700 foreign investors and allowed Quiros to misuse $200 million in EB-5 immigrant investor funds.

Stenger wants until Aug. 19 to answer the charges, after he was granted one extension in order to continue settlement discussions, according to court documents. He was originally asked to file defense arguments by May 26. That date was moved to June 30.

Stenger is represented by Stephanie Casey, of the firm Colson Hicks Eidson. Casey wrote that the former resort operator could settle out of court before the requested hearing date.

“The entry of a settlement agreement between the parties would obviate the need for Defendant to file a response to the Amended Complaint and thus conserve resources,” Casey wrote in court filings Monday.

Stenger and Quiros are also being sued by the state of Vermont on 15 counts of fraud. U.S. Attorney Eric Miller is conducting a criminal investigation. No charges have been brought.

Neither the SEC nor Michael Goldberg, the court-appointed receiver in the case, has opposed Casey’s motion to delay.

Attempts Wednesday to reach Casey, Goldberg and representatives from the SEC were unsuccessful.

Goldberg hired Stenger in April to help the company Leisure Hotels & Resorts operate the ski area under receivership. As the longtime president and CEO of Jay Peak, Stenger made $175,000 a year. He is now earning $100,000 a year under the receivership.

Goldberg’s primary responsibilities are to protect the interests of investors and ensure the resort retains value. He has said Stenger was kept on staff because he has the institutional knowledge needed to manage the resort. The former CEO has no control or decision-making authority, Goldberg has said. In a recent letter to an investor he said, “Bill shows up for work each day and has been extremely helpful over the past two months.”

“Our forensic analysis indicates that Bill Stenger never diverted or otherwise personally transferred investor money to himself other than his salary,” Goldberg wrote to the investor. “He is also not a wealthy man as his home is mortgaged and the funds were used to pay his children’s and grandchildren’s education. This is much different from Quiros who wrongfully diverted investor money for his personal benefit.”

Two of Stenger’s sons work at Jay Peak. Last week Andy Stenger was promoted to the new role of director of facilities, according to an internal memo obtained by VTDigger. He previously served as a project manager on the construction and development team.