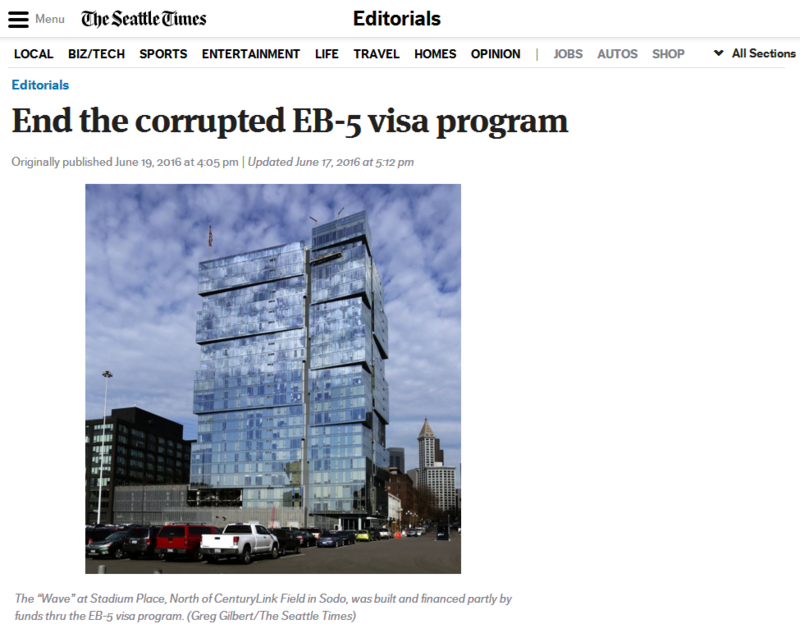 THE United States offers 140,000 immigration visas each year based on applicants’ job skills — or, in one special category, on the ability to invest $500,000 to $1 million.

That latter category — known as the “employment based fifth preference visa” or EB-5 — has shown itself to be especially susceptible to corruption and of questionable worth.

Started in 1990 by Congress to stimulate economic activity, it is a program that is no longer necessary.

Under the EB-5 program, a foreign investor (and spouse and unmarried children) can become eligible to live and work in the United States permanently if they invest $1 million in a “new commercial enterprise that employs at least 10 full-time U.S. workers.” The price drops to $500,000 if the investment is in a rural area or a place with 150 percent of the national unemployment rate.

The program, which awards about 10,000 visas each year, makes it possible to prey on potential immigrants who are vulnerable to such scams and to advice from unqualified advisers.”

While the program has attracted billions to the Seattle area, in at least three cases it has caught the attention of Securities and Exchange Commission investigators.

Most recent, American Life, which channels EB-5 money to U.S. projects, was fined $1.2 million for using unlicensed advisers in directing possible immigrants. The attorney for another EB-5 coordinator says his client remains under criminal investigation after SEC accusations that he defrauded Chinese investors. And a Bellevue immigration attorney has been fined for acting as an unregistered broker on foreign investments.

The United States Citizenship and Immigration Services website also warns of schemes it has shut down where defendants misused investor funds for personal use, including one that diverted foreign money to its own Cajun-themed restaurant and left the investors with no visas.

The program, which awards about 10,000 visas each year, makes it possible to prey on potential immigrants who are vulnerable to such scams and to advice from unqualified advisers.

Plus, the investments cited by American Life are in the Sodo and downtown districts of Seattle as well as in the downtowns of Los Angeles and Atlanta, areas likely to attract investors who don’t need a green card dangled in front of them.

In December, Congress reauthorized the EB-5 program through September 2016. That should be the end of it.