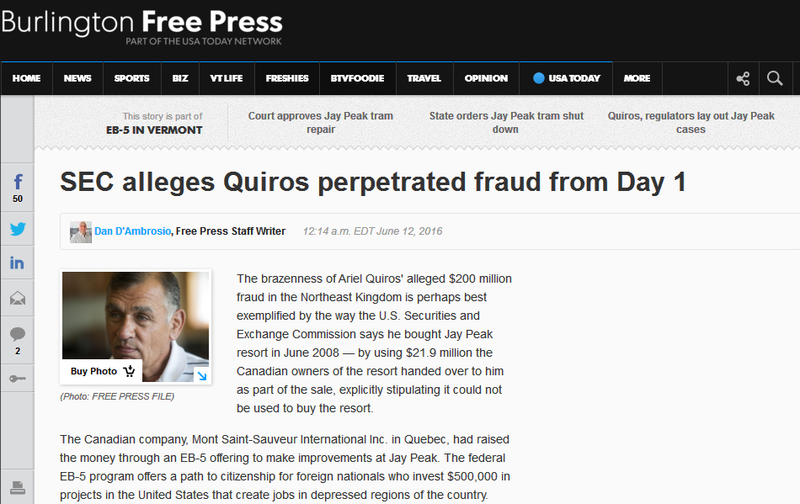 The brazenness of Ariel Quiros' alleged $200 million fraud in the Northeast Kingdom is perhaps best exemplified by the way the U.S. Securities and Exchange Commission says he bought Jay Peak resort in June 2008 — by using $21.9 million the Canadian owners of the resort handed over to him as part of the sale, explicitly stipulating it could not be used to buy the resort.

The Canadian company, Mont Saint-Sauveur International Inc. in Quebec, had raised the money through an EB-5 offering to make improvements at Jay Peak. The federal EB-5 program offers a path to citizenship for foreign nationals who invest $500,000 in projects in the United States that create jobs in depressed regions of the country.

Quiros negotiated the sale between Mont Saint-Sauveur and his Q Resorts over six months from January through June 2008, closing the deal on June 23 for $25.7 million.

In a document filed in federal court in Miami, where Quiros and his former partner, Newport resident Bill Stenger are facing fraud allegations, the SEC says Mont Saint-Sauveur representatives wrote a letter on June 18, 2008, explaining that the $21.9 million being transferred to Q Resorts as part of the sale were EB-5 investor funds.

"The letter further stated the investor money ... could not be used in any way to pay for Q Resorts' purchase of Jay Peak," the SEC writes.

The Canadians could not have been any more clear. To no avail, according to the SEC.

"Despite the fact that (Mont Saint-Sauveur International) clearly explained to Quiros and Stenger they could not use investor money to purchase Jay Peak, Quiros — aided by transfers that Stenger made — did exactly that," the SEC states. "Over the next two months Quiros, through Q Resorts, used $21.9 million of investor funds ... to fund the vast majority of his purchase of Jay Peak."

In an interview with the Burlington Free Press on Saturday, Bill Stenger denied knowing the investor funds were being used to purchase Jay Peak.

"The transfers were made as part of the start-up and creation of a new company," Stenger said.

Ariel Quiros could not be reached for comment on Saturday.

Bill Stenger had worked for Mont Saint-Sauveur since 1984, managing Jay Peak, and the $21.9 million in investor funds was being held in escrow accounts at People's United Bank, where Stenger was a signatory on all accounts, according to the SEC.

In preparation for the closing of the sale of Jay Peak, Ariel Quiros asked representatives of Mont Saint-Sauveur to open brokerage accounts at Raymond James in Florida with Quiros' former son-in-law. The Canadians agreed and Stenger opened the accounts, according to the court document.

The SEC points out in its court filing that the agreements with the EB-5 investors stipulated their money could only be put into FDIC-insured bank accounts, and as a brokerage firm, Raymond James was not a bank, and was not FDIC-insured. But eight days after he opened the first escrow account, the SEC alleges Stenger signed an amendment to the agreement as general partner, removing the requirement of an FDIC-insured bank account.

"This cleared the way for the transfer of investor funds to Raymond James accounts," the court document states.

Stenger failed to amend a second investor agreement removing the requirement for FDIC backing, yet later transferred $75 million raised from 150 investors into Quiros' Raymond James account, violating the terms of that agreement, according to the SEC.

Worse still, according to the SEC, Stenger gave up control of the money transferred to Quiros' accounts in Florida.

The SEC alleges that Stenger, as the "sole principal" of the partnerships formed with the foreign investors, "knew he was supposed to control investor funds."

"Yet he willingly allowed Quiros to take control of the funds, abdicating the responsibilities clearly laid out for him in the limited partnership agreements," the court document states.

Stenger told the Free Press his focus was on the construction and creation of the Hotel Jay, Penthouse Suites, water park and ice arena at Jay Peak, all of which were completed and "properly built."

"I was not paying attention to the funding because I had no reason to believe it was not being used properly," Stenger said.