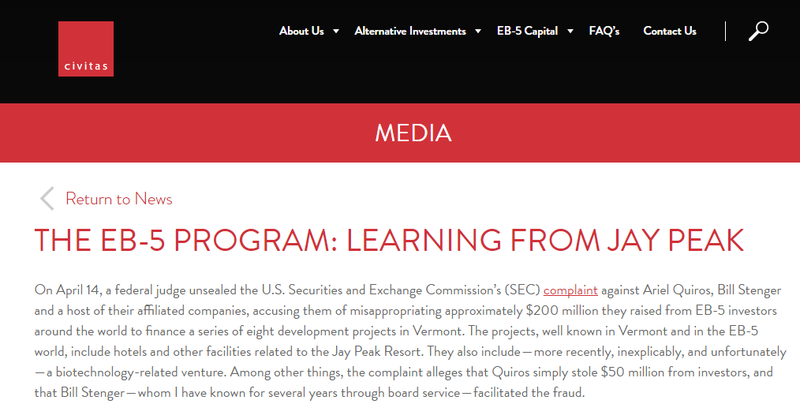 On April 14, a federal judge unsealed the U.S. Securities and Exchange Commission’s (SEC) complaint against Ariel Quiros, Bill Stenger and a host of their affiliated companies, accusing them of misappropriating approximately $200 million they raised from EB-5 investors around the world to finance a series of eight development projects in Vermont. The projects, well known in Vermont and in the EB-5 world, include hotels and other facilities related to the Jay Peak Resort. They also include — more recently, inexplicably, and unfortunately — a biotechnology-related venture. Among other things, the complaint alleges that Quiros simply stole $50 million from investors, and that Bill Stenger — whom I have known for several years through board service — facilitated the fraud.

The accusations left me speechless.

My partners and I founded Civitas Capital Group in late 2008, just after the Lehman Brothers bankruptcy marked the beginning of a global financial crisis of historic proportions. We started the firm to help the City of Dallas Office of Economic Development create the City of Dallas Regional Center (CDRC), which has developed into a successful public-private partnership, attracting hundreds of millions of dollars of job-creating foreign direct investment to Dallas. I am extremely proud of the CDRC and its accomplishments, which include financing affordable assisted living facilities in underserved areas of Dallas and providing critical gap capital for the first full-service hotel built in the city’s southern sector since World War II. These and other pioneering projects, in Dallas and around the country, demonstrate the power of EB-5 to accelerate economic development and create jobs, even in tough markets long starved of investment.

EB-5 has attracted more than $13 billion in foreign direct investment to job-creating American businesses in a range of industries throughout the United States, all at no cost to the taxpayer. The program is clearly doing a lot of good, but the Vermont case makes clear that reforms are needed.

The good news is that reforms should be imminent. Testifying before the Senate Judiciary Committee on April 13 — the day before news of the Vermont fraud case broke — I praised the senators on the panel for their support for wide-ranging integrity measures aimed at preventing and punishing fraud in the EB-5 program. These efforts enjoy strong and near-universal support among EB-5 stakeholders and in Congress. Among many other things, the proposed reforms would require EB-5 market participants to:

· Obtain U.S. Citizenship and Immigration Services (USCIS) approval of a detailed business plan for each EB-5 investment proposal, including mandatory disclosure of any conflicts of interest of the type the SEC accuses Quiros and Stenger of hiding, prior to accepting any investor’s capital;

· Disclose all fees paid or payable to the project sponsor;

· Pay new fees to fund the creation of an Integrity Fund, which will ensure that the cost of enforcement of the new rules will continue to be borne by industry, not taxpayers;

Importantly, proposed reform legislation would also grant USCIS significant new authority to terminate and otherwise sanction regional centers that fail to toe the line. Had these measures been in place, particularly the documented securities compliance procedures, site visits and Integrity Fund championed by Judiciary Committee Chairman Chuck Grassley and Ranking Member Patrick Leahy, the alleged Vermont fiasco might well have been avoided, or discovered much earlier.

Reforms like these are obvious in hindsight. Indeed, the evolution of EB-5 industry regulation is following a familiar pattern: better late than never.

1. First, as market participants learn the new industry, regulation is light and haphazard. This was the case with EB-5, which was virtually unknown and barely used at all from its inception in the early 1990s until the onset of the 2008–09 global financial crisis, when firms like Civitas realized the program’s potential.

2. Next, the need for more sophisticated regulation becomes apparent as problems arise. In the EB-5 context, this would include both bad actors taking advantage of gaps in the system as well as issues like Targeted Employment Area reform.

3. Finally — and this is where EB-5 is today — authorities are empowered to take action to rein in bad actors and tighten requirements for industry participants.

This pattern is evident in the history of any number of markets, from corn futures to car insurance to pharmaceuticals. History makes just as clear that no matter how sophisticated the rules governing a market, there will always be those who will lie and steal. The United States securities markets are the most sophisticated, transparent and heavily regulated in the world, but the SEC nonetheless has no shortage of securities fraud cases to prosecute.

Congress has wisely recognized that the solution is not to get rid of EB-5, any more than the solution to stock fraud is to ban stocks. Rather, the EB-5 program needs smart and effective regulation, including tough penalties for violations that will deter and punish bad actors. Fortunately, in recent Congressional hearings, several members used the phrase, “mend it, don’t end it,” and voiced support for serious reforms that would go a long way toward preventing the kind of abuse of investor trust that is alleged to have taken place in Vermont, and toward punishing those who remain undeterred. In Senator Schumer’s words at the recent hearing, such reforms could pass through Congress “like a knife through butter” — and that’s a good thing.

While I strongly support reform, I do not sugarcoat the fact that implementation of these integrity measures will not be without cost to EB-5 operators. Smaller operators in particular will be burdened. Some will exit the market or be forced out of business. Others will likely consolidate in order to build scale, so as to spread the regulatory compliance costs over a larger revenue base. The barriers to entry to the EB-5 market will be higher.

Are these costs justified? I think so. At Civitas, I work hard with my Chief Compliance Officer and her team to build a culture of compliance. This means personnel, legal fees, policies and procedures, and staying on top of compliance issues in a constantly evolving marketplace — and these things do not just happen. They require considerable resources and leadership from the top. But the fact is that Civitas — like all regional center operators — is involved in significant transactions that require investors to risk not just their capital, but also their immigration status. While many countries have investor immigration programs similar to EB-5, the United States is alone in the world in requiring that investors bet their immigration status on whether a required number of jobs will be created in a specific window of time.

Think about that. It means that if a regional center operator fails to deliver, investors’ lives can be permanently disrupted not just financially, but in any number of ways. Families can be separated, careers ruined. Accordingly, it is fitting that Congress impose minimum standards for industry participants and penalties for scofflaws who abuse investor trust. For regional centers that operate as investment advisers — like Civitas — such standards have been in place for years via the Investment Advisers Act and, more recently, the Dodd-Frank Wall Street Reform and Consumer Protection Act. It is time for all regional centers, be they investment advisers or otherwise, to be held to analogous standards.