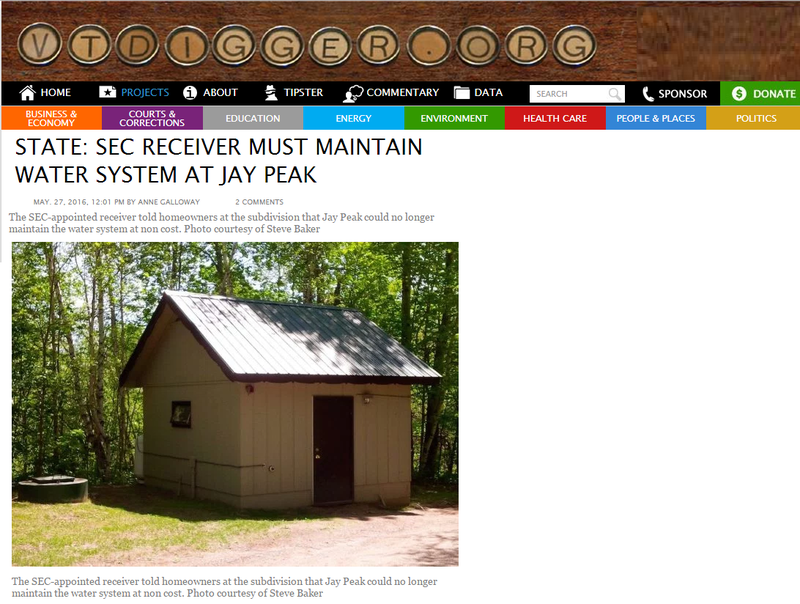 For 50 years, second homeowners at a Jay Peak Resort subdivision have had access to free water, but that perk will likely be another casualty of the EB-5 scandal.

Michael Goldberg, the court-appointed Securities and Exchange Commission receiver who is running Jay Peak Resort, told 30 homeowners last week that the resort could no longer afford to maintain a water system for them at no cost.

The state says the system must be inspected because tests have shown elevated levels of manganese, a naturally occurring mineral. The cost of cleaning and repairs could be as much as $115,000, Goldberg says.

In a letter to residents, Goldberg said ownership of the water system would be transferred to a homeowners association and residents would need to pay for the maintenance themselves. He gave the residents less than two weeks to find an alternative. In an interview, Goldberg said that he wanted to put residents on notice right away because of potential public health effects, and in retrospect he said the letter was “too harsh.”

“I have no problem giving them more time, I have no problem fixing it, but they have to pay for the maintenance,” Goldberg said. “We’re not a charity where we can afford to incur costs for a bunch of second homeowners at the expense of victims, employees and contractors. We wanted them to know they have to step up and take responsibility. The days of free water, unfortunately, are over. We can’t afford to do that.”

“We will not cut off the water, but we put them on notice so that they drink the water voluntarily,” Goldberg said. “I don’t know what the health effects are.”

The financial situation at Jay Peak is “dire,” Goldberg says, and he is trying to identify cost savings in order to stabilize the resort in the aftermath of a massive alleged fraud perpetrated by former owners Ariel Quiros and Bill Stenger.

The U.S. District Court of South Florida wrested control of the resort away from the Quiros and Stenger on April 13, a day after the SEC filed a lawsuit alleging that the two men had misused $200 million in EB-5 immigrant investor funds. Of that amount, Quiros is accused of stealing $55 million for the purchase of Jay Peak and Burke Mountain resorts and a condo at Trump Tower among other expenditures. As a result of the fraud, 700 investors may not be fully repaid, contractors are owed about $6 million for construction projects, and expensive maintenance projects, including the repair of a tram line, have been deferred.

Steve Baker, one of the second homeowners, says there is “no money to run our well system because it’s in Trump Tower.” Baker says their situation is “trivial” compared with the $2 million owed to DEW Construction, but he said Goldberg’s office jumped the gun and “got the whole neighborhood on the war path” because they think he’s going cut off water to the subdivision.

“I’m not try to paint Goldberg as a bad guy,” Baker said. “But it’s a knee jerk response. It’s an expense, and they’re trying to shed expense very quickly.”

“I think if Goldberg wanted to strike a different tone, we’d all be willing to pay a water fee,” he added. “Or he could pay for legal fees to remove the restrictive covenants so we can drill our own wells.”

Baker says residents are prohibited from drilling their own wells because of a deed restriction and consequently must rely on the resort for water. Under local and state laws, Jay Peak has no alternative except to continue to maintain the system, according to state officials.

The resort owns the subdivision and the water system, according to Ellen Parr Doering, the deputy chief of the state’s water quality division for the Department of Environmental Conservation. Jay Peak holds the state permit for the water system, which is not easily transferrable to another entity, Parr Doering says, and if the resort wants to charge fees for maintaining the tank and piping system, it must obtain approval from the Department of Public Service.

“In the past, Jay Peak operated and maintained the water system for free,” Parr Doering says. “That’s why we have this complication. That’s not typically how it happens. I’m not surprised some of these things have come up. These sorts of handshake deals are a thing of the past.”

In a letter to Goldberg sent on Wednesday, the Department of Environmental Conservation said the receiver must continue maintaining the water system or risk penalty assessments.

The issue has come up before. In 2013, Baker says Bill Stenger, the former CEO of Jay Peak, asked residents to pay $17,000 a year for improvements that he said had been made to the system.

Baker says the system at one point was leaking 16,000 gallons a day (“that’s a small brook”) in one homeowners lawn, and his own yard was declared a wetland in part because of a water system leak.

“We were saying ‘you want us to pay for a system you don’t maintain?’” Baker recalled.

Baker suggested at an October 2014 meeting that Jay Peak had to go through the Department of Public Service to set water rates. In response, he says Stenger told residents that their deeds stipulated that they form an association and pay for our own water.