Proposed changes to Gorman & Co.'s plans for a $67 million downtown hotel and conference center have some aldermen on edge.
Wisconsin-based Gorman plans to close on the Amerock/Ziock building May 20 for $250,000 but wants an option to sell it back to the city at the same price before Aug. 1.
"I thought we were married to them, and we had a deal," said Ald. Kevin Frost, R-4, at Monday's Planning & Development Committee meeting. "I'm concerned if they want to leave the dance, we're stuck with the keys." 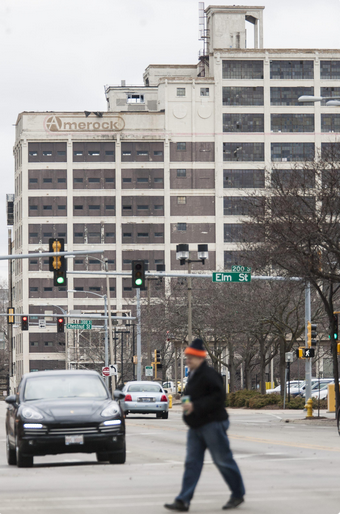 Mayor Larry Morrissey said Gorman wants to keep its options open if it can't line up financing in time to finish and occupy the building by Dec. 31, 2016, to qualify for state River Edge Historic Tax Credits.
"So we're at the dance, and the clock's getting close to midnight," Morrissey responded. "We want to make sure Cinderella keeps her dress on."
It was a humorous note in a serious discussion for aldermen, who questioned amendments to a development agreement that the committee eventually approved. They'll get a chance to revisit the matter on the City Council floor Monday.
The amendments include:
Waiving more than $500,000 in city permit fees in exchange for Gorman buying local furniture, art and fixtures for the building, and making "the attempt to utilize local contractors, tradesman, makers and artists" during construction.
Backing a $3 million Section 108 Housing and Urban Development loan.
Building a 300-vehicle parking lot on the site of the former Tapco building, south of the Amerock building, instead of on Green Street where it would have been attached to an Amtrak train station.
Increasing the size of the hotel from 150 to 160 rooms and building a two-floor, 40,000-square-foot conference center.
Morrissey assured aldermen that Gorman remains committed to the project but said it has been more difficult for the company to raise money in China through the EB-5 program. Under EB-5, foreigners who invest $500,000 in a project that creates 10 jobs can get green cards. Gorman, which raised $15 million for the $19 million historic renovation in Milwaukee of the former Pabst brewery into the Brewhouse Inn & Suites, wants to raise $25 million for the Rockford project.
"The market in China didn't look at this project the same way they saw the one in Milwaukee," Morrissey said.
City Legal Director Patrick Hayes said that selling the property May 20 would allow Gorman to begin demolition and remediation work in anticipation of resolving its financing in September and beginning the historic renovation. He said Gorman would first renovate the hotel, which has to be occupied in 19 months to qualify for the state tax credits, before building the convention center that would not qualify for the credits.