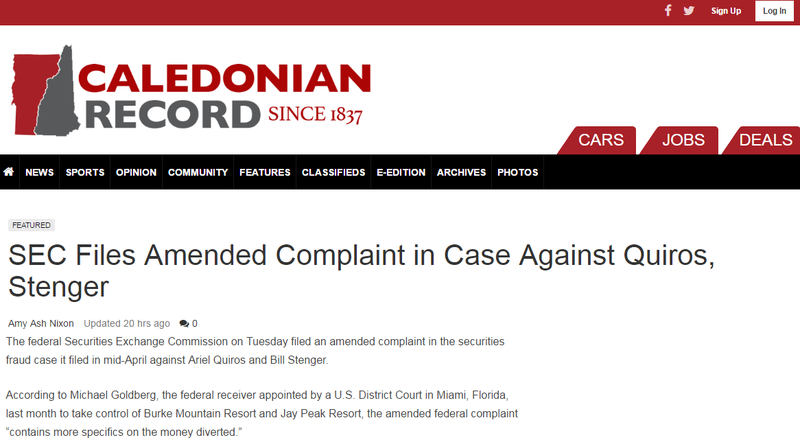 The federal Securities Exchange Commission on Tuesday filed an amended complaint in the securities fraud case it filed in mid-April against Ariel Quiros and Bill Stenger.

According to Michael Goldberg, the federal receiver appointed by a U.S. District Court in Miami, Florida, last month to take control of Burke Mountain Resort and Jay Peak Resort, the amended federal complaint “contains more specifics on the money diverted.”

The Vermont Attorney General has also filed suit against Quiros and Stenger.

Authorities allege that funds were moved between seven EB-5 projects, and that each was over-budget or experiencing shortfalls, creating a web of inappropriate transfers to disguise that fact.

“The need to backfill construction and shortfalls were created in large part by Quiros pilfering tens of millions of dollars of investor money for his own use,” the amended complaint states.

The SEC’s attorneys state that Quiros made use of margin loans between projects to, enable him “…to improperly use investor funds from subsequent phases to fund prior phases,” of phases of the hotel development at Jay Peak.

In a section of the complaint related to the Golf and Mountain Phase IV at Jay Peak, the SEC added to the misuse of funds they allege against Quiros and Stenger saying the pair had misrepresented how they would spend investor money, and, “…the amount of money or buildings and infrastructure they would contribute to the project.”

The SEC alleges the developers “…took more than $12.8 million of investor funds (over $6.5 million more than they should have taken) and they failed to make at least $3.8 million of the required contributions to the project.”

“Quiros used more than $3.8 million of investor funds he improperly took to purchase a condominium at the Setai Fifth Avenue Hotel and Residences, which is in New York City,” Tuesday’s amended SEC complaint says.

Efforts to obtain comment from SEC attorney Robert Levenson on Tuesday were not successful by press time.

The SEC added language in the amended complaint regarding alleged misappropriation at the Lodge and Townhouses phase of development at Jay, stating the partners “took more than $8.6 million of investor funds (more than $1.2 million more than they should have taken) and they failed to make at least $6.6 million of the required contributions to the project.”

In the Stateside project at Jay, the amended SEC complaint states that the partners took more than $10 million of investor funds - in excess fo $3 million more than they should have - and failed to contribute $7.4 million of their required contributions to that project. Quiros is alleged to have used $2 million to pay the taxes on another of his entities in the web of companies the SEC alleges he used to transfer money back and forth through in his alleged scheme.