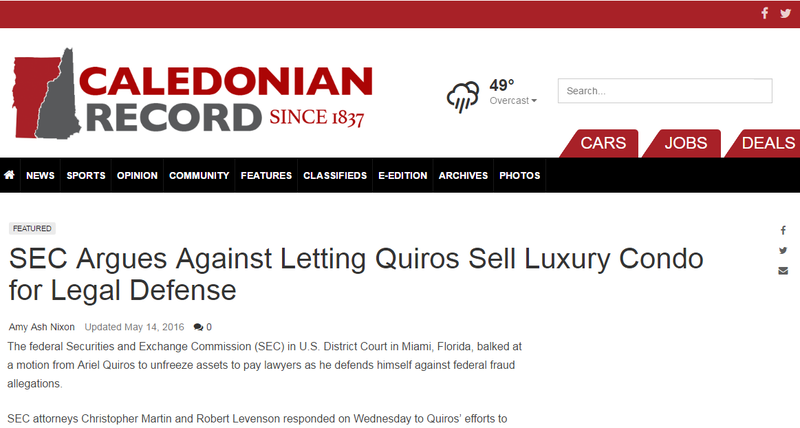 The federal Securities and Exchange Commission (SEC) in U.S. District Court in Miami, Florida, balked at a motion from Ariel Quiros to unfreeze assets to pay lawyers as he defends himself against federal fraud allegations.

SEC attorneys Christopher Martin and Robert Levenson responded on Wednesday to Quiros’ efforts to free up funds in a New York City luxury condo he owns in order to defend himself against federal and state charges.

Quiros wants to borrow money against his Setai Condominium in New York City.

The Setai Wall Street Condominiums, according to their website, “represents an entirely new level of sophistication in downtown living. Here awaits an unparalleled residential experience with exceptional hotel-quality services.”

The luxury condo is one of two luxury NYC condos Quiros owns, including a second at Trump Place, according to federal authorities.

The SEC attorneys argue the Wall Street condo “was purchased with investor funds.” An exhibit entered by the SEC on Wednesday shows that Quiros paid $3,816,000 for the condo.

Quiros seeks to use funds from the sale or borrowing, if permitted, both for his defense as well as for living expenses. He has so far been given access to $41,000 in accounts in his name. Quiros is awaiting a ruling on a second motion to allow him $100,000 a month in living expenses plus $300,000 for legal bills so far in the case.

SEC attorneys in their motion argue that investors in the Burke Mountain and Jay Peak projects, who already have allegedly seen more than $250 million misused or misappropriated, would now be asked to also cover Quiros’s defense.

His attorney fees, the SEC attorneys note, are in excess of $800 an hour.

The requests for him to sell his condo for his defense, and the second motion seeking access to funds to cover his monthly expenses and legal expenses both “…are outrageous and threaten to further deplete the scarce resources currently available for the benefit of investors,” the SEC argues. “The Court should deny both motions.”

In a show cause hearing, held Monday and Tuesday in Miami, an attorney for Quiros represented that the Setai Wall Street Condo could not be linked to funds allegedly misused in the EB-5 case.

The SEC says there is proof that the Setai Wall Street Condo was bought using funds from the Jay Peak Golf and Mountain Phase IV, and that Quiros’s attorney knew this and have seen documents to prove it.

“Nonetheless, he brazenly claimed to the Court he was not aware of any investor funds ‘tainting’ this condominium,” the SEC wrote.

The SEC charges, “…The Setai Condominium is ‘tainted’ with investor funds, so there is absolutely no basis to release it from the asset freeze.”

“Quiros’ motion seeking funds to pay his attorneys’ fees is no more well taken,” the SEC goes on.

“Having already stolen more than $55 million of investor funds and misspent hundreds of millions more, Quiros now seeks to exacerbate the harm perpetrated on investors by attempting to drain assets potentially subject to a disgorgement judgment to pay excessive attorneys’ fees. For roughly two weeks’ work in one case, Quiros’ lawyers seek more than $200,000 in fees - a rate of more than $5 million a year.”

Those costs do not include additional amounts Quiros is seeking for accounting and other expert witnesses, lawyers to represent him in other civil actions, the State of Vermont lawsuit or potential criminal charges, the SEC attorneys argue.

“By way of contrast, Michael Goldberg, the receiver in this case (appointed by the judge to take control of the Vermont EB-5 projects at Burke and Jay), testified at the hearing he is billing at the reduced rate of $395 an hour in an effort to conserve scarce resources for investors.

The SEC attorneys state, “Quiros’ request for attorneys’ fees shows no such interest in investors’ well-being.”

“As the testimony of Mr. Goldberg at the preliminary injunction hearing showed, there are no liquid assets in either the accounts of Mr. Quiros or the Receivership estate with which to pay these outrageous sums,” the SEC attorneys continue. “…Quiros does not have sufficient assets to justify releasing any of them from the freeze in order to fund an army of lawyers.”

Quiros is alleged to have begun a Ponzi-like scheme to defraud investors at both resorts beginning with the purchase of Jay Peak in 2008, according to a complaint brought against him last month by the SEC.

The Vermont Attorney General filed a similar suit in Washington County Superior Court based on an investigation in which the state’s Department of Financial Regulation and the Agency of Commerce and Community Development worked with the AG’s office.

Quiros, owner of the resorts, and Bill Stenger, his business partner, are both alleged to have misappropriated more than $200 million in funds through the EB-5 program, which foreign investors can receive green cards for, in exchange for investments of a half-million dollars’ each.

Officials further accuse Quiros only of taking another $50 million of those investors’ funds for personal use.

Both men say they are not guilty of the charges.