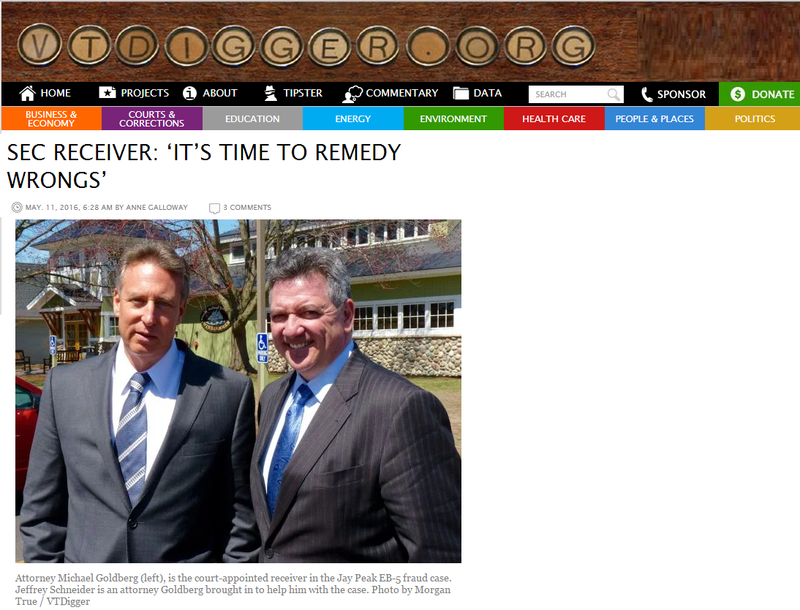 Properties seized by the federal government last month should remain in the hands of a court-appointed receiver, SEC attorneys said, in order to protect the interests of 700 immigrant investors from 74 countries who were defrauded by Quiros as part of a massive “Ponzi-like” scheme in the Northeast Kingdom.

Attorneys representing Quiros argued that Jay Peak Resort, Burke Mountain Resort and commercial properties in Newport, Vermont, should be returned to Quiros. The Miami businessman was not responsible for offering documents and did not communicate with investors, defense attorneys said. They allege that Stenger was the one who made misrepresentations to investors.

Attorney David Gordon told the court that Quiros did not make representations to investors and therefore did not violate securities laws. Gordon, a lawyer with Mitchel Silberberg and Knupp in New York City, said the SEC had no jurisdiction in the case. Ownership of the resorts should be returned to Quiros, Gordon said, and the receiver who was appointed by the court to run the companies should be replaced by a corporate monitor who would oversee the properties.

Federal regulators took control of all of Stenger’s and Quiros’ bank accounts, companies, and properties on April 12. Michael Goldberg was immediately appointed as the receiver in the case, and took over as CEO of all of the companies associated with Jay Peak, Burke Mountain and AnC Bio Vermont. He is responsible for running the company operations and salvaging what he can for investors.

Goldberg testified for more than an hour at the end of the two-day hearing in Miami. Bob Levenson, an SEC attorney, asked him to explain what condition he found the companies in, how much money was needed to continue operating the resorts and how the alleged fraud could impact investors’ immigration status.

“Ariel Quiros says the receivership is not necessary,” Levenson said. “Do you agree?”

“No,” Goldberg said. “Because what I inherited was nothing more than a disaster and to put it back in the hands of the individual who made this mess would be a mistake. A corporate monitor doesn’t have the authority to to prevent money from being diverted.”

“It stopped the diversion of money from corporate accounts,” Goldberg replied. Later he added, “It’s time to remedy wrongs, so I think the receivership is necessary.”

Goldberg must find enough money to finish a $20 million condo development and address cash flow problems at the two ski resorts. Jay Peak, for example, has $5.9 million in unrestricted cash to fund operations right now. Goldberg needs $7 million to $11 million to run the hotels, water park and mountain operations through the off season, and more than $5 million to repair the tram system.

The toughest challenge, though, is figuring out what to do with the AnC Bio Vermont project, which was never built and most of the money has disappeared.

Goldberg told Judge Darrin Gayles, the federal judge for the U.S. District Court in the Southern District of Florida, that it was going to be a difficult case to resolve because in addition to recovering funds for investors, he must find a way to help 400 of the 700 investors whose immigration status is now in jeopardy as a result of the fraud.

“It’s the saddest investor pool I’ve ever dealt with because of the immigration status,” Goldberg said.

Goldberg has recovered assets for defrauded investors in a number of high-profile Ponzi schemes, including the Bernie Madoff case. Typically investors lose their life savings and “that’s devastating enough.” But in this case investors‘ “entire lives are in limbo.”

“This is really disruptive to people,” Goldberg said.

Over the past three weeks, Goldberg says he has reached out to 200 of the investors, many of whom are represented by lawyers. Most are primarily concerned about their immigration status, and many also want their money back, he said.

“A lot of investors are in doubly bad luck with not getting their immigration status and they are certainly not going to get a substantial return,” Goldberg said.

Investors in the Stateside development at Jay Peak and AnC Bio Vermont are unable to get visas without a special exemption from the federal government and face possible deportation. In order for foreign nationals to obtain residency in the United States through the EB-5 program, each $500,000 investment in qualified projects must result in the creation of 10 jobs.

While Stateside was fully subscribed, it was not completed and as a result not enough jobs have been created under the EB-5 program. Goldberg may need to borrow about $22 million to finish the project in order to satisfy job creation targets under the EB-5 program. Of the $37 million in investor funds originally available for the construction of 84 townhomes, a medical center and recreational center, $55,000 remains in a bank account for Stateside.

Quiros and Stenger recently attempted to obtain a $25.8 million loan to finish Stateside, purchase snow guns and repair the Jay Peak Tram. They pledged all of the assets at Jay Peak and Burke Mountain but failed to secure the loan, Goldberg said.

AnC Bio Vermont is even more problematic, Goldberg said. The biomedical center proposed for Newport was partially subscribed. The developers raised $83 million from 166 investors, nothing has been built and only $17.8 million remains in an escrow account for the project.

Goldberg says he would need $47 million to complete the building, and millions of dollars more to capitalize the complicated business plan proposed by Quiros and Stenger, which involved stem cell research and the sale of artificial organs that have not been patented, approved by the FDA or tested in the American market.

The Statehouse and AnC Bio Vermont projects were shortchanged $69 million total, according to the SEC.

HOW THE PROJECTS WERE PADDED

The developers took money out of the projects in fees, some of which, the SEC argues, they were not entitled to. In all, Quiros and Stenger took $98.3 million in management fees and land sales, and made direct purchases of two resorts, two condos in New York City and land in Newport straight out of investor funds, the SEC says.

Of that amount, Quiros and Stenger were entitled to take a total of $42.8 million in profits for 10 percent to 15 percent in project management fees, 5 percent for contingencies and a total of $12.68 million for land proceeds, based on agreements they signed with investors.

The SEC alleges that the balance — $55.5 million — was taken from investors illegally.

Mark Dee, a staff accountant for the SEC and a retired law enforcement officer who specialized in financial services investigations, was responsible for tracing funds and developing a cash flow analysis of the Jay Peak, Burke and AnC Bio Vermont projects.

Dee testified that he examined more than 1,000 transactions and found that all $350 million in immigrant investor funds were commingled.

He described the Quiros investigation as the most difficult of his career “because of the commingling between the seven phases and following each transaction of interest.”

“It was always tracing money back as though the money was backflowed,” Dee said. “It was run through several bank accounts and then run through margin loans.”

Dee described the convoluted scheme: They used People’s Bank, Raymond James investor accounts, Quiros’ accounts — Q Resorts and Jay Construction Management — Treasury bills and margin loans. The flow of funds was circular, and shortfalls for each project were made up by new money from new investors.

Quiros and Stenger used $12.34 million from Tram Haus (Phase I) and $9.5 million from Hotel Suites (Phase II) to buy Jay Peak Resort. Quiros took $3.8 million from the Golf and Mountain Suites to buy a luxury condo on Fifth Avenue in New York City.

Most of the money — $31 million — was looted from the AnC Bio Vermont project, the SEC alleges. Using investor funds, he spent $2.2 million for a second condo in New York at Trump Tower, $7 million for the purchase of Burke Mountain, $3.8 million for the Bogner plant in Newport and $12 million for corporate and personal taxes.

In addition to the $55.5 million Quiros and Stenger took out of the projects, they also mislead investors about how much they would contribute — $20 million — for improvements to the resort, the SEC alleges. Investors were also never made aware that Quiros leveraged $105 million of their money for margin loans from 2009 to 2012. In March 2014, Raymond James called in a margin loan of $18.4 million.

At the end of the hearing, Gordon asked Judge Darrin Gayles to release the 400 Fifth Ave. condo from the asset freeze. Gordon said Quiros needed the money to pay his bills and he thought the sale of the property would generate about $8 million to $11 million.

Gayles asked attorneys for the defense and for the SEC to submit findings of fact and proposed conclusions before he rules on the case. No further hearings are scheduled at this time.