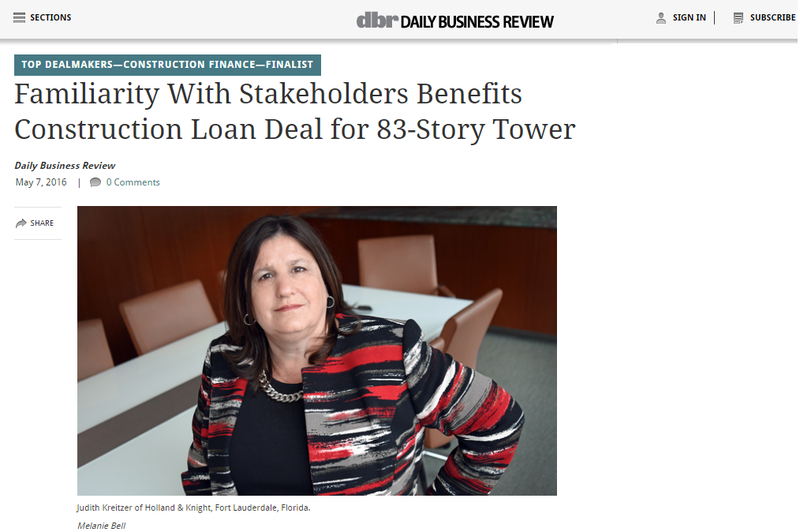 The 83-story tower will be the tallest skyscraper on the eastern seaboard south of New York. The mixed-use project at 1101 Brickell Ave. includes 821 apartments, 208 hotel rooms, more than 50,000 square feet of retail and restaurant space, and a 19-story pedestal with more than 100,000 square feet of medical office space and a teaching facility. The $800 million project, which is raising 20 percent of its funding from foreign investors through the EB-5 visa program, is expected to be finished in 2017.

"I have represented banks where the Hollos were on the other side for 20 years," she said. "I have done a number of deals between Wells and the Hollos. That made it interesting."

It also helped that Wells Fargo financed a previous loan to Florida East Coast for the purchase of Panorama's land.

As counsel to the seven lenders, Kreitzer worked individually with each bank and their counsel in negotiating and drafting all the loan documents for a complex, syndicated deal that required extensive due diligence review, which she also conducted.

Complicating an already cumbersome process was the fact the developer began construction before the loan was secured. The concrete for the foundation had been ordered, and arrangements were made for lane closures and extensive permitting. For the concrete to be poured, the developer needed authorization to shut down one lane of jammed Brickell Avenue.

To protect the lien interests of the co-lenders, work had to be stopped and a notice of termination issued. Then the loan had to close and work recommence before the concrete pouring date.

Over a two-day period, construction work stopped to pay the general contractor and subcontractors for their work to date and provide lien waivers, which were necessary for the loan to close and a new notice of commencement to be issued, Kreitzer said.

"Everyone kept up their end of the deal, from the borrower to Wells Fargo to the co-lenders, and the loan closed in time for work to recommence and for the concrete to pour on schedule," Kreitzer said. "It was a true team effort, hinging on the close relationships."