Driftwood Hospitality Management has several hotel projects on tap as part of plans to double its presence in South Florida within a few years.

As of December, the company based in North Palm Beach had 48 hotels across 14 states and Costa Rica. Sixteen are in Florida and five in South Florida. 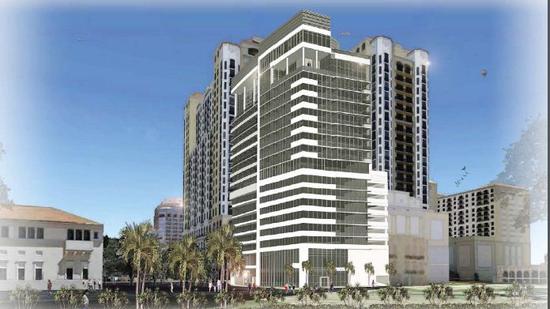 Driftwood Hospitality Management plans to break ground on a 150-room Canopy by Hilton hotel in downtown West Palm Beach in the first quarter of 2016. (Pic Courtesy)

Four more hotels are in varying stages of development, including a Canopy by Hilton in downtown West Palm Beach, a Curio by Hilton in Broward County and, in Miami-Dade County, a Residence Inn by Marriott Flagler Station and a DoubleTree Hotel by Hilton in Doral. Two other new hotels are in earlier planning stages, a Driftwood official said.

"The market is extremely strong in South Florida … and the occupancy has been phenomenal," said Carlos Rodriguez, Driftwood's executive vice president. "Obviously, there is new competition coming, there are several rooms being built in the market, but we still

Last month, Driftwood broke ground on the $22.2 million, 123-room Residence Inn Flagler Station — the first hotel it's developing through a new EB-5 program that allows foreigners to invest in new hotels. The foreign investor, in exchange for U.S. residence, would invest at least $500,000 in U.S.-based projects in select areas that would create at least 10 jobs.

Work is ahead of schedule on the Residence Inn, with opening expected in December, said Rodriguez, who works out of Driftwood's Coral Cables office.

In West Palm Beach, a 150-room Canopy by Hilton will be its second EB-5 project, he said. Four of Driftwood's six new hotel projects will be through its new EB-5 program.

Hilton Worldwide launched the Canopy by Hilton lifestyle brand in October, touting it as an energizing new neighborhood hotel concept. Each property will embrace local elements in its design and food and beverage.

"We do like what Canopy is offering in terms of the product for that particular site," said Michael Diaz, Driftwood's chief operating officer, of the new boutique hotel that will rise up about two blocks from City Place, the downtown retail, dining and entertainment complex.

The West Palm Beach Canopy project is in the design phase.

"The architects are designing it right now as we speak," said Rodriguez. "It takes time to get the architectural drawings done and getting them approved by Hilton and then frankly getting it through the city."

The $37 million Canopy hotel is expected to break ground in the first quarter 2016, he said.

In 2015, Driftwood marks 16 years of operations. The company was formed by hospitality industry veterans David Buddemeyer, Diaz and Peter J. Walz — former executives of Servico Hotels and Resorts in West Palm Beach. Driftwood at that time was focused mostly on acquiring and renovating properties.

Then Rodriguez joined as a partner in 2003 after his company, Cardel Hospitality Group, which specialized in building new hotels, merged with Driftwood.

"We provide all the services. We can do it all," Rodriguez said. "We do acquisitions, we do renovations, we do ground-up builds and we manage all our properties."

The company enjoyed some years of growth until it suffered a setback when its major financial backer, Lehman Brothers, filed for bankruptcy in 2008.

"It took us a couple of years to consolidate and buy them out, and since then it, it's been grow, grow, grow," Rodriguez said.

Driftwood has an ownership stake in two-thirds of its properties and operates the remainder through third-party management, Diaz said.

Today it has 40 corporate employees — the majority in North Palm Beach — and 4,000 companywide, including at the properties it owns and manages.

"We're growing and we'll continue to grow at a good pace," Rodriguez said. "We're having fun and we're making money and we're happy."