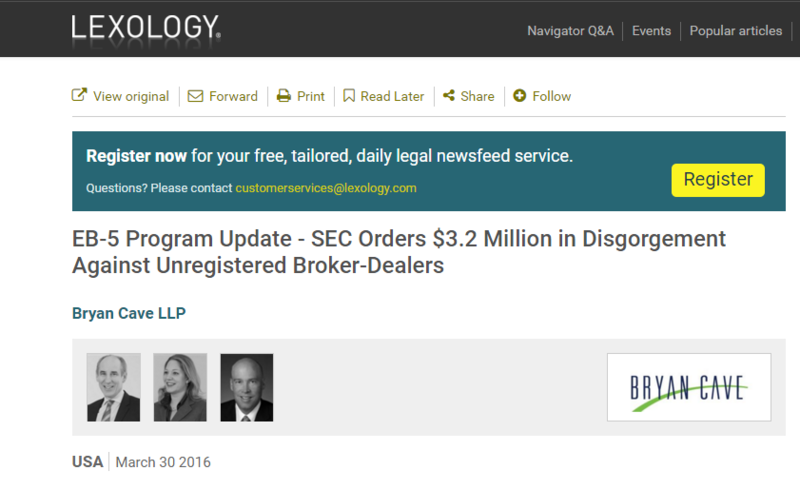 So you want to use the government’s EB-5 Immigrant Investor Program (“EB-5 Program”) to raise cash? Be aware that the SEC will be looking over your shoulder to determine whether you are acting as an unregistered broker-dealer and require you to disgorge the money you made. In the first order of its kind, the SEC recently ordered two companies to pay nearly $3.2 million for acting as unregistered broker-dealers in connection with the sale of securities related to the EB-5 Program.

This order relates to charges the SEC entered last June against Ireeco LLC and its successor Ireeco Limited (collectively “Ireeco”) for acting as unregistered brokers for EB-5 investors by soliciting those investors through a website that promised aid relating to the EB-5 Program. Despite never registering with the SEC in any capacity, Ireeco collected more than $3 million in commissions stemming from more than 158 foreign investors who invested a combined total of $79 million in proposed EB-5 projects. Ireeco agreed to a cease and desist order based on Exchange Act Section 15(a) and to a censure. For further information on the EB-5 Program and the SEC’s allegations against Ireeco, please see our previous alert:SEC Expands its Enforcement Against Unregistered Broker-Dealers by Bringing First Enforcement Action Against an Unregistered Broker-Dealer Based on the EB-5 Program.

Following recent hearings, Administrative Judge Jason S. Patil ordered Ireeco to pay nearly $3.2 million in disgorgement of those illegal commissions. Judge Patil declined to excuse disgorgement on the basis of inability to pay because, he said, the companies only lacked funds because they distributed the illegal commissions directly to the two individuals who owned and controlled the companies. Noting that Ireeco failed to provide sufficient evidence that the owners performed services for their clients in return for the commissions they received, Judge Patil stated that “[t]o excuse disgorgement in this case based on inability to pay would encourage the redirecting of illegal profits from an entity into the pockets of its officers.” The Judge further stated that “[i]t would make a mockery of the remedy of disgorgement against an entity if the unjustly enriched entity were to be excused simply because it transferred the unlawful profits, through pay or other means, to the only two people who controlled the entity throughout the course of its misconduct.” Judge Patil declined to order civil penalties because Ireeco did not engage in fraud, deceit, or manipulation, and he noted that this was the SEC’s first enforcement action against an unregistered broker-dealer in connection with an EB-5 project.

The significant penalty in this enforcement case of all commissions paid to the companies serves as a reminder that the SEC continues to investigate EB-5 investment opportunities as well as other contexts in which to charge entities and individuals as acting as unregistered broker-dealers.