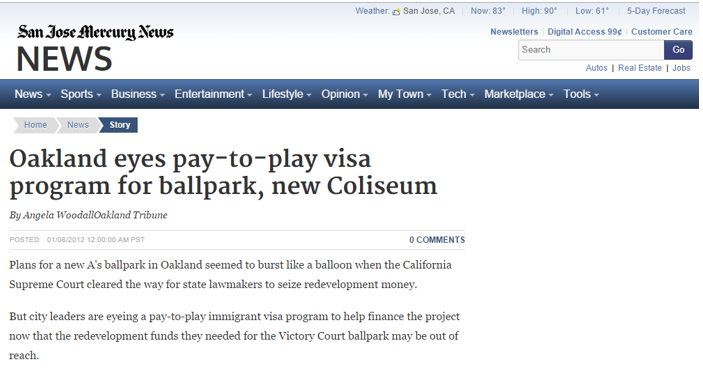 Plans for a new A's ballpark in Oakland seemed to burst like a balloon when the California Supreme Court cleared the way for state lawmakers to seize redevelopment money.

But city leaders are eyeing a pay-to-play immigrant visa program to help finance the project now that the redevelopment funds they needed for the Victory Court ballpark may be out of reach.

Oakland is looking at finding the needed capital through a program that partners foreign investors willing to pay for a green card with credit-starved developers and cash-strapped municipalities.

Called EB-5, the program marks the first time that foreign investors can buy their way to a U.S. green card.

The program earned the nickname "million dollar visa" because a potential immigrant can get a green card for himself, his spouse and their children under the age of 21 by investing at least $1 million in a project that produces at least 10 full-time jobs. In areas where unemployment is high, the investor can buy in for a minimum of $500,000.

The $8 million Tribune Tower deal completed in December was financed with EB-5 money.

And Mayor Jean Quan has been wooing Chinese investors to put their money behind the Victory Court ballpark and Coliseum City project, which includes hotels, a convention center, shops and new facilities for the Raiders and Warriors, as well as a ballpark alternative. Those projects are too vast to be paid for with only foreign capital, Quan said, but the city is looking at EB-5 visa money as a significant funding source.

Chinese investors, she said, "are very interested in EB-5 and always want to know what things are possible."

The strategy has actually been around since 1990 but wasn't an attractive proposal until the government revamped the program about a decade ago. EB-5 financing has paid for numerous developments across the country and attracted Bay Area names like former San Francisco Mayor Willie Brown and the developer of Jack London Square, Jim Falaschi.

"It's quite the rage within the development community," said immigration attorney H. Ronald Klasko, who has specialized in EB-5 deals since 1991.

"There seems to be an unending supply of investors," Klasko said.

"If you want to live, work or retire anywhere in the U.S.A. and can afford to invest $500,000 for a minimum of five years, the EB-5 visa is an option worth considering," according to the Bay Area Regional Center, one of 211 centers in the country where business people work to help foreign investors navigate the federal bureaucracy to do business in the United States. Investors mainly have been from China and Venezuela, though the program is attracting interest in Indian and Russia.

Brown is a member of the San Francisco Bay Area Regional Center. Other centers are located throughout the Bay Area, from Alamo to Union City. Although certified by the federal government, the centers usually are private ventures that operate separate from city governments.

Fremont and Union City officials said no EB-5 deals area pending in their cities even though their territory is covered by multiple regional centers. San Jose came close to an EB-5 deal, officials there said, but it didn't work out.

The arrangement offers a layer of opacity for the foreign investors behind complex networks of partnerships.

For example, the Tribune Tower appears to have involved the San Francisco Regional Center, according to real estate records that list Thomas Henderson, a Bay Area businessman who founded Avalon Bay Foods Inc., as the managing member. He is also part of CallSocket Holding Co. LLC, the tower's new owner, and China-U.S. Venture LLC.

But no foreign investors are listed in any of the real estate documents, and CallSocket's headquarters (shared with China-U.S. Venture LLC) is an office in Oakland's produce district. No one answered the phone numbers listed.

In Union City, the New World Regional Center shares an address with a company that makes disposable gloves, Shen Wei USA, as well as other companies with ties to China.

Regional centers also let EB-5 projects bend the job creation rule by counting indirect employment in the total of 10 full-time positions. The jobs are open to anyone with permission to work in the United States.

The program turns the traditional path to citizenship on its head. But supporters see it as a win-win.

It's not as simple as buying a green card, said Michael Hastings, who launched the Bay Area Regional Center, which covers cities from Santa Clara County to Sacramento and includes the East Bay. Hastings is a private tech sector investor and a former executive with KPMG, a network of firms providing audit, tax and advisory services. Falaschi, of Jack London Square Investors, and Brendan Heafey are also partners.

Hastings said he and his Regional Center partners are still looking for a project 2½ years after they began operating in July 2009.

"It's not the easiest thing," Hastings said. It's also not without risk.

After two years, if the investors can deliver on their job-creation promises, they stand to make a profit and become permanent citizens﻿, along with their families.

If the jobs don't materialize within two years, they don't get the green cards.

And they don't get their money back if the project fails.