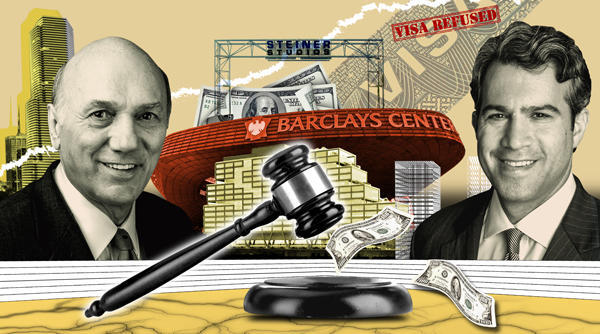 Michael Gibson, a Miami investment adviser, was hosting clients at his booth in the Las Vegas Convention Center when he became bothered by two men conducting their own business in his quarters.

Gibson was at the 2009 American Immigration Lawyers Association annual conference to promote his advisory service for the EB-5 “cash-for-visa” program, and his booth was busy with developers and attorneys looking to fund real estate projects with cheap foreign capital.

The two men standing in his space, George Olsen and Paul Levinsohn, had recently launched their own EB-5 firm in New York to manage capital on behalf of overseas investors and were seeking connections to help fund their first projects.

Olsen and Levinsohn launched their firm, the New York City Regional Center, 10 years ago with just $300,000. Since then the company has raised over $1.5 billion in foreign capital to fund 21 real estate and infrastructure projects across the city, while securing more than 4,500 green cards for foreigners, according to its website.

Among the 903 regional centers designated by the federal government, as of June 2018, NYCRC is considered one of the most prolific EB-5 conduits in the country.

“You owe it to yourself and your family to select a regional center with a proven track record of success,” Levinsohn says in a video to promote one of the firm’s recent loan agreements — a CityBridge project to replace pay phones with LinkNYC Wi-Fi kiosks.

But the company’s reputation is being tested by two ongoing lawsuits that allege the regional center has defrauded investors and refused to pay an overseas migration firm that sent hundreds of investors to NYCRC.

Olsen, Levinsohn and their firm are accused of breaching their fiduciary duty to more than 100 Chinese investors who provided $77 million for a project the regional center continued to market even though the developer had defaulted on its loan repayments. The investors claim NYCRC used their money to fund the project without commitment from the developer and the city, while it received millions in annual fees and interest.

To raise capital for infrastructure improvements around Forest City’s Barclays Center project in 2010, the firm attracted Chinese migration agents with increasingly higher commissions. In an ongoing case brought by one of these agents, the regional center is accused of refusing to pay almost $10 million in commissions for that project and several others.

“They’ve done some things that weren’t the best practice,” Gibson, whose advisory website monitors EB-5 litigation, told The Real Deal. “But they were able to recognize the potential EB-5 had to finance projects that may not have got financing that quickly or cheaply.”