Texas Hotel, to Regain its Luster, Relies on Foreign Dollars 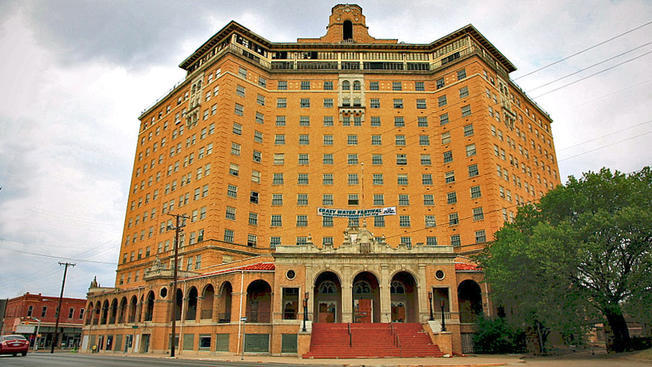 Closed to guests since 1972, the shuttered hotel is rife with graffiti, debris and water damage.

He sees the roof as the perfect spot for a wine bar, accompanied by a private nook for newlyweds to have a first drink or a meal.

The Cloud Room, the ballroom that overlooks Mineral Wells, would be restored to its original state, as would the lobby -- complete with an old-time phone booth near the reception desk.

Fairchild, head of Baker Hotel Development Partners LLC, who has worked on reviving the hotel since 2007, remains confident that the $56 million renovation will happen -- despite a steady barrage of financing roadblocks.

"I understand the cynics," Fairchild told the Fort Worth Star-Telegram. "Believe me, I wouldn't be here working on this for seven years if I didn't think it could happen."

The hotel first captured his imagination when he drove by it on the way to a nearby ranch where his family has a lease along the Brazos River. He has been working with a team of investors to turn the old hotel into a destination that will help revitalize downtown Mineral Wells, about an hour northwest of Fort Worth.

To bring the hotel back to life, the Baker group is tapping various sources, including funds from an economic development sales tax, state and federal historic tax credits, and private financing.

The largest and perhaps most important piece -- $28 million -- is slated to come from the EB-5 Immigrant Investor program, a growing but criticized mechanism that allows wealthy international investors to obtain U.S. visas by placing at least $500,000 in a U.S. business that creates or preserves at least 10 full-time jobs.

About 80 percent of EB-5 investors come from China, according to Invest in the USA, an industry trade group.

Though it's been around for 25 years, the program is still relatively small: It is capped at 10,000 visas annually. Cities such as Dallas and Las Vegas have used it to finance new projects, from hotels to casinos. A 2012 study by Invest in the USA, which represents 260 EB-5 regional centers nationwide, said the program has added about $6.1 million to the Texas tax rolls.

EB-5 has even become an issue in the Fort Worth City Council race. One candidate is advocating that Fort Worth set up its own regional center similar to the one in Dallas.

While it's popular as a financing tool, opponents of EB-5 say that it allows rich foreigners a preferential path through the immigration maze and that it is ripe for abuse and fraudulent business deals.

The EB-5 Immigrant Investor Regional Center pilot program is scheduled to expire in September. There is legislation that would make the regional centers permanent, or Congress could renew them for a shorter term.

The report said no laws were broken but criticized Mayorkas for creating "an appearance of favoritism and special access" when he intervened in cases involving prominent Democrats and the brother of former Secretary of State Hillary Clinton.

David North, a fellow with the Center for Immigration Studies , which advocates for low immigration rates, said loopholes make the program a magnet for abuse.

"This is not necessarily a good program or a bad program, but it has all sorts of vulnerabilities," North said. "It is a source of inexpensive and undemanding capital."

Peter Joseph , executive director of Invest in the USA, said he "absolutely" expects the program to be renewed. He said the trade group supports tighter safeguards to limit abuses.

"We're very hopeful for reauthorization," Joseph said. "We've been part of policy discussion for how it can be improved upon."

Invest in the USA's members include around 260 regional centers that account for about 95 percent of EB-5 investment in the U.S., Joseph said. About 80 percent of the investment comes from China.

"Post-recession, there's a bigger gap that needs to be filled and you need every tool in the toolbox," Joseph said. "When it does work, the nature of the capital is low-cost, and it can help make the capital stacks make more sense. It is a patient capital, and it can really attract other sources of financing in these new capital markets."

Though North has blogged about abuses in the program, he expects congressional support to continue. "My suspicion is it will get renewed again," North said.

With the Baker Hotel, the complicated financing is still a work in progress.

The Baker group needs to raise $2 million more before going forward with seeking EB-5 funding. Once financing is in place, it would take three years to do asbestos remediation and renovate the hotel.

Investors were originally working with Civitas Capital Group , which also manages the City of Dallas Regional Center , but have switched to Florida-based Pathways for EB-5 financing.

They haven't formally signed an agreement with Pathways. Once they do, it will likely take about a year to get preapproval from U.S. Citizenship and Immigration Services .

"We took a couple of steps back on the EB-5 portion and had to go back to the drawing board," said Chad Patton, one of Fairchild's partners in the project. "We're now working with a new group out of Florida that requires us to raise a little more equity."

In May, nearly 96 percent of Mineral Wells voters approved using up to $4 million of the city's 4B economic development sales tax for the project. The dollars won't be spent unless the renovation goes forward.

"We would be issuing those bonds after all of the funding sources are secured and the project is underway,"City Manager Lance Howerton said. "If the project doesn't make, the money isn't spent. Those are the last dollars to go into the project."

After the May vote, some hoped that the renovation would begin this year, but Mayor Mike Allen isn't surprised the project is taking longer.

"It's probably the best chance to get it done and probably the last," Allen said. "I think the majority of people understand that it's going to be a long, hard process."

The city is also in the planning stages for a downtown redevelopment with the University of Texas at Arlington's Institute of Urban Studies .

If the Baker eventually comes back to life, it wouldn't be the first time Mineral Wells has been a magnet for tourists.

The city grew out of a claim that its spring waters cured a host of ailments.

The town had 400 mineral wells by 1920, when it was called "the South's greatest health resort," according to the Handbook of Texas .

In 1927, the 200-room Crazy Water Hotel opened its doors, and hotel magnate T.B. Baker would follow suit with the Baker in 1929. Unfortunately, because of the stock market crash, the timing couldn't have been worse.

The Baker had mineral baths, an Olympic-size swimming pool and a rooftop nightclub known as the Cloud Room, where old-timers could recall hearing tunes drifting through the air at night.

"Back in those days, the Baker would probably rival anything in Las Vegas today," former assistant manager Roy D. Walker said in a 1993 Star-Telegram article. "Big-name stars like Lawrence Welk, Sophie Tucker, the Dorsey Brothers. You couldn't find a parking place for blocks."

Mineral Wells would transform into a military town by World War II, and that continued through the Vietnam War. But the military's presence would decline and Fort Wolters closed in 1975.

The hotel closed in 1963 but reopened two years later, only to have its last paying guest in 1972.