Where will China’s super rich migrate if Trump kills the ‘golden visa’? 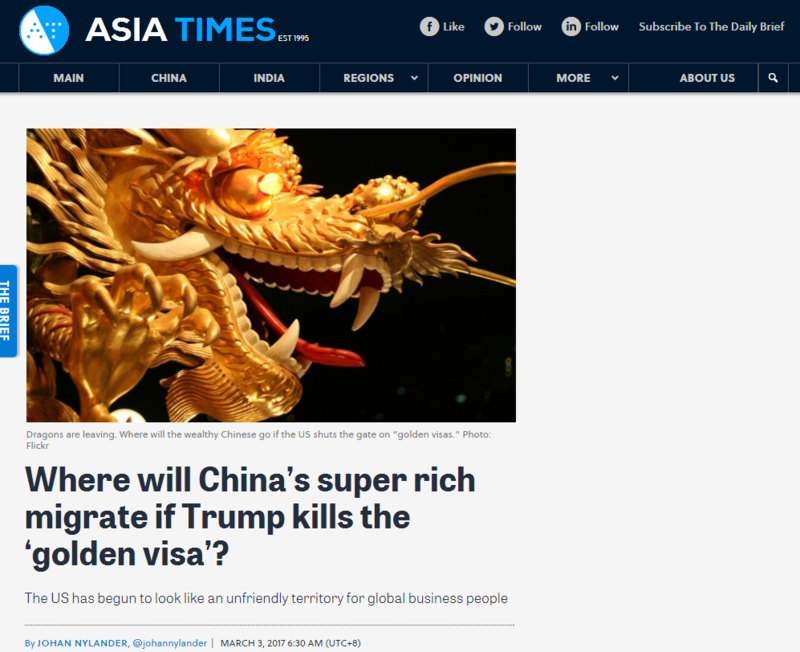 China’s super rich have for years been leaving the country and bringing their families and wealth with them. The number one choice of destination to migrate, normally via high-rolling investment visa schemes, has been the United States.

But since Donald Trump took office in January he has already begun to take a harder stance on immigration, including wealthy Chinese.

While the president has yet to speak on the so called EB-5 – the controversial “golden visa” program that has accepted thousands of wealthy immigrants over the years – the US has begun to look like an unfriendly territory for global business people, said Nuri Katz, head of financial services firm Apex Capital Partners.

It would however be difficult for Trump to criticize the program in too harsh words since he and his buddies, including son-in-law and White House advisor Jared Kushner, have benefited greatly from the scheme. Several Trump-branded construction project have reportedly been funded by wealthy Chinese who have invested cash for visa, including the gleaming Trump Bay Street complex in New Jersey. 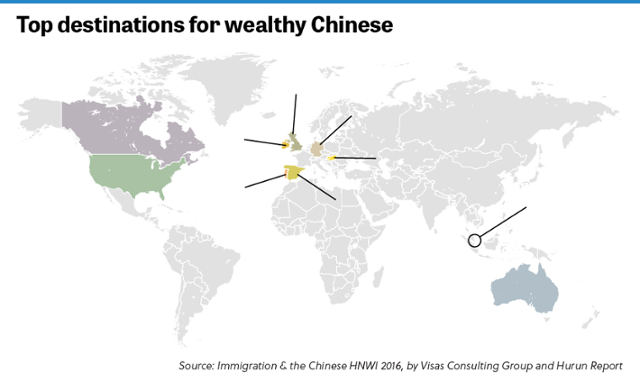 “As such, I do not think that Trump will initiate any changes to the EB-5,” Katz told Asia Times.

“Having said that, many other individuals, including many congressmen and senators do want to change or scrap the program entirely, so that may happen despite what Trump may think or want.”

The EB-5 visa is a method of obtaining a green card for foreign nationals who invest money in the US. To obtain the visa, individuals must invest US$1 million – or US$500,000 in so-called targeted employment areas – that should lead to the creation of at least 10 jobs for American workers. Launched by Congress in 1990, it’s today the most popular residency program in the world.

Applicants of the program have invested more than US$13 billion since 2008 and have created tens of thousands of jobs for US workers, according to Stephen Yale-Loehr, a law professor at Cornell University

Almost 90% of all “golden visa” investors are from China. 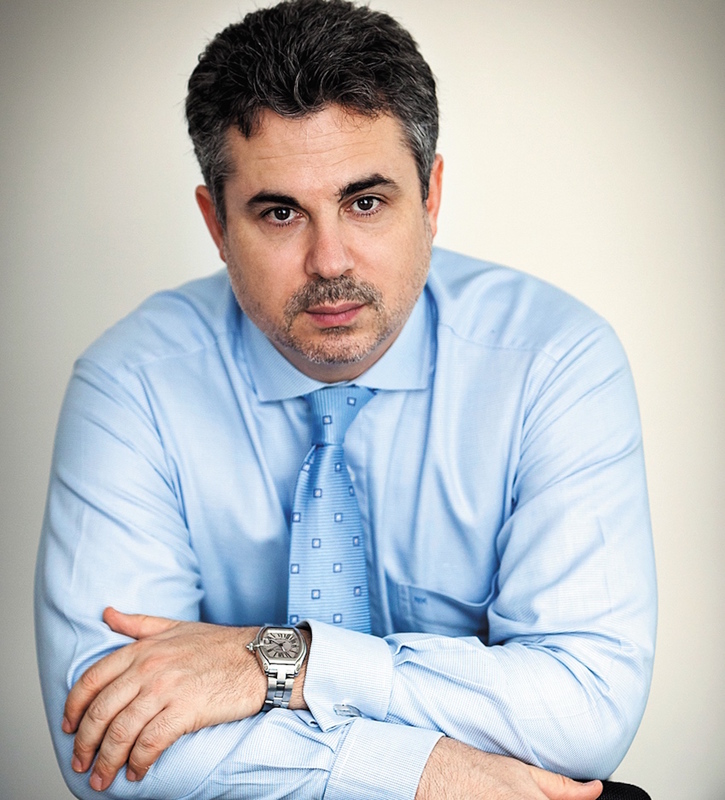 But uncertainty has become an overhang on the program, which will face renewal on April 28.

The scheme has been criticized for being plagued by widespread fraud and political corruption. Senate Judiciary Committee Chairman Chuck Grassley recently said the program poses “significant national security risks” and that it may be “facilitating terrorist travel, economic espionage, money laundering and investment fraud.” Katz agrees that the program has been found to have many flaws as well as insufficient due diligence on applicants, with people both in the US and abroad falling victim.

“Many dishonest players have promoted the EB-5 program in China pretending to have official approval from the US showing that their investment project is a solid, profitable investment proposal. Yet that was not true and many people, including Chinese nationals, have lost money in the program,” he said.

Another issue of concern is that the current processing of applications have taken too long, sometimes up to eight years. Most applicants will not find that acceptable.

Now, most experts expect some sort of change to the scheme.

“There’s been a specter of reform in the background for so long, it’s been tough to have certainty about how the program will function. Will projects that qualify under the current program be grandfathered in? No one knows,” Michael Gibson, a partner at Bass, Berry & Sims in Washington DC, told Forbes. “Everybody believes there will be some reform, but no one knows what it will look like.”

Indeed, even the US immigration office is left in the dark, at least according to its chatbot, named Emma, that answers questions on its online forum. “The Department of Homeland Security (DHS) is updating information regarding the presidential actions on immigration,” the bot said when asked whether the EB-5 scheme would be changed under the new administration.

Katz believes wealthy Chinese now will move away from the EB-5 program and eye other options and destinations. Canada, the UK and Australia are also among most popular destinations for China’s super rich, according to different ranking. Considerable numbers of Chinese are already receiving citizenship by investment in places like the islands of Dominica and St Kitts in the West Indies and other places in the Caribbean.

“As we see the EB-5 program processing times going up, we see more interest in the citizenship by investment programs in the Caribbean. We expect this trend to continue to grow,” Katz said.

A report from Hurun, a research firm in Shanghai that tracks the wealthy, found in 2014 that 64% of Chinese millionaires were considering or were in the process of moving, with education topping the list of reasons.