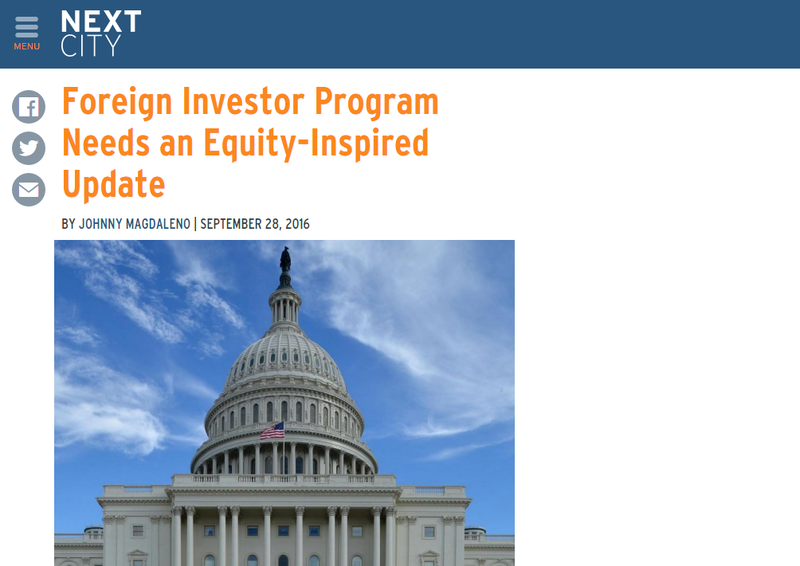 On Sept. 30, the U.S. Senate is set to extend the EB-5 visa program, which offers residency to wealthy foreigners (and their families) if they invest in job-creating development projects, with a minimum of $1 million — or $500,000 in rural areas or communities where unemployment is higher than the national average.

Since EB-5 was started, it’s funneled nearly $5 billion into construction projects like apartment condos, manufacturing facilities and university buildings, mostly with money from Chinese investors. The bulk of its funds have gone to cities like New York and Los Angeles, backing projects like the $20 billion Hudson Yards in Manhattan. According to the Brookings Institution it has created, both directly and indirectly, upward of 85,000 jobs.

But critics say a number of high-profile fraud cases with EB-5 investors and the fact that developers have more control on the ground than the U.S. government does have pushed it out of the sphere of its original purpose. It was established in 1990 largely as a means to revitalize economic development, and the lower minimum investment of $500,000 is specifically intended to help high-unemployment areas.

Vermont Senator Patrick Leahy, a longtime supporter of the program until his state was embroiled in one of the largest EB-5 frauds in history, and Iowa Senator Chuck Grassley spent 2015 pushing for its reform. In Vermont, two developers were accused by the U.S. Securities and Exchange Commission of spending $350 million from 700 EB-5 investors on old projects that had gone over budget; the funders thought they were contributing to a new biomedical facility and ski lodge renovation.

The two senators proposed the American Job Creation and Investment Promotion Reform Act to require that 50 percent of jobs created for EB-5 projects get sourced directly from the census tracts or regions they’re being built in.

On Sept. 22, Leahy delivered a scathing indictment of EB-5 on the U.S. Senate floor. “Affluent areas now dominate the program by exploiting incentives intended for underserved areas, a practice Department of Homeland Security Secretary Johnson has rightly described as gerrymandering,” he said. “It has gotten to a point where a luxury hotel in Beverly Hills qualifies as a distressed urban area. Only in the world of EB-5 is Beverly Hills considered economically distressed.”

Even though it never saw the light of day, Leahy’s reform offered the types of suggestions that might have helped the program get back to its roots, says Michael Gibson, an investment adviser with EB5projects.com. “If your argument is that the capital should go, as I think Congress originally intended, to areas that are not served by traditional forms of financing, then you’d say the program is not serving its original intent,” he says. “If you’re on the side that says it should go to New York State real estate luxury condo development, then it’s doing exactly what it’s supposed to do.”

As of right now, there’s no across-the-board consensus on just which U.S. communities are getting access to EB-5 jobs, and how significantly these development projects are bringing funds into high-unemployment areas. The Hudson Yards project, for example, is located on the cusp of one of the richest neighborhoods in the country, yet when developers pitched the project for EB-5 consideration they lumped in census tracts from nearby areas like Harlem with higher unemployment percentages, and were able to bring the investment minimum down to $500,000.

Make no mistake: Hudson Yards, which is the largest private development project in U.S. history, will indeed create thousands of jobs and pump the city with revenue. An economic impact report put together by two of its developers, Related Co. and Oxford Properties Group, allege that it will contribute $19 billion to the city economy annually and create more than 55,000 jobs, and that it’s one of the key drivers behind New York’s spike in construction employment. The project is set to be completed by 2019.

But there’s little public information on how the developers plan on targeting those 55,000 jobs, or from which census tracts they’ll be sourced from. Trying to collect a snapshot of how other big EB-5 projects are spurring jobs in high-unemployment areas throughout the U.S. is an equally opaque venture, as you have to go through the 861 EB-5 investment centers throughout the country. They’re vetted by the U.S. government but largely run by developers involved in local EB-5 projects.

That’s what Kim Zeuli, senior vice president at the Initiative for a Competitive Inner City, had to do to put together her organization’s 2014 EB-5 impact report. She says that report, which looked at 178 EB-5 projects and highlighted five that did contribute a significant economic impact to disadvantaged areas, looks at a mere drop in the bucket. “We have no idea [when it comes to national EB-5 impact], and nobody does,” she says. “It’s all speculation,” though she says her research has led her to believe that the program has a net positive effect on revitalizing local economies overall.

Gibson says that only 20 percent of the “hundreds” of EB-5 projects his company has overseen actually rolled out in places with severe unemployment, or rural areas.

“It’s not comprehensive. We haven’t reviewed every project out there, but based on what we have seen, most of them on their own would not qualify [for Targeted Area Employment] if they were just to use the census tract these projects were located in,” he says.

But proponents of the program like Peter D. Joseph, who runs pro-EB-5 trade group Invest in the U.S.A., says there’s no denying that it’s been a major boon for the economy.

“We see it as a source of job creation, economic development and capital development that has come of age in the post-recession economy,” says Joseph. “At the end of the day, this is a program that has delivered billions of dollars to the nation without taking taxpayer money.”

He thinks a new version of the program is necessary. As it matures, he’s optimistic there will be more chances for lawmakers to come to an agreement on a comprehensive EB-5 update that really gives the program teeth when it comes to making sure disadvantaged communities in the U.S. benefit the most from these foreign funds.

“It definitely needs to be reformed,” says Joseph. “Using unemployment as the single metric to determine whether a geographic area really qualifies for some kind of economic incentive — that’s a blunt instrument.” He says he’s hoping that any EB-5 reforms that do come in the future expand on the unemployment definition, and are “made more stringent by adding [local] poverty level and median income into the analysis.”

Priority should be given to increasing the minimum investment amounts per 10 job/visa. Since the demand is high, a higher $ amount per visa would increase the overall funding flow and relieve the pressure/challenge to create 10 jobs per visa amount. Projects would be better financed for their level of job creation, with less borderline forecast, less pressure to cross-the-line and overall a better quality and manageability. This in turn would allow the program to support smaller projects or direct investments that create W2-jobs, rather than EB-5 being grooved in the dominant rut of "real estate pools, indirect job accounting, and gerrymandering TEA". I think the only stakeholders benefiting from a smaller minimum amount per visa are the attorneys & agents whose fees are directly related to the number of immigrants per project. A program that would at least double the minimum amounts would be much better aligned with U.S. policy to stimulate the economy through job creation and capital investment by foreign investors.
Georges Selvais www,CQven.com