Dollars for green cards: EB-5 program grants visas, even citizenship, to foreigners who invest in U.S. 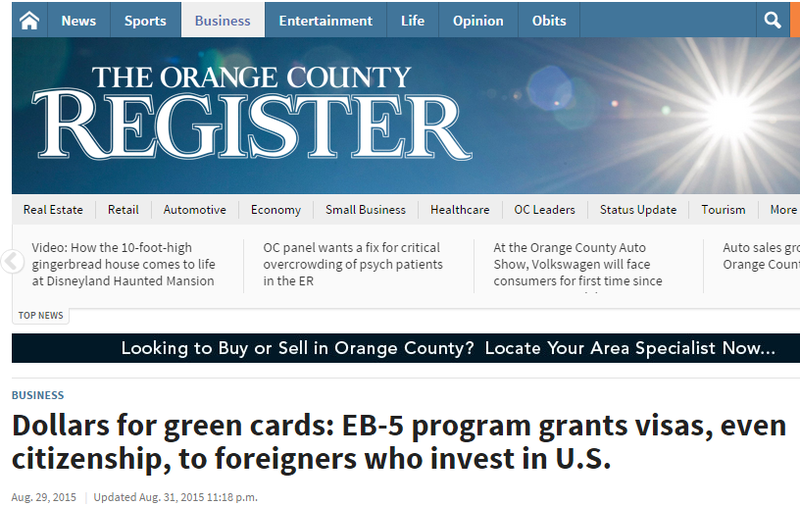 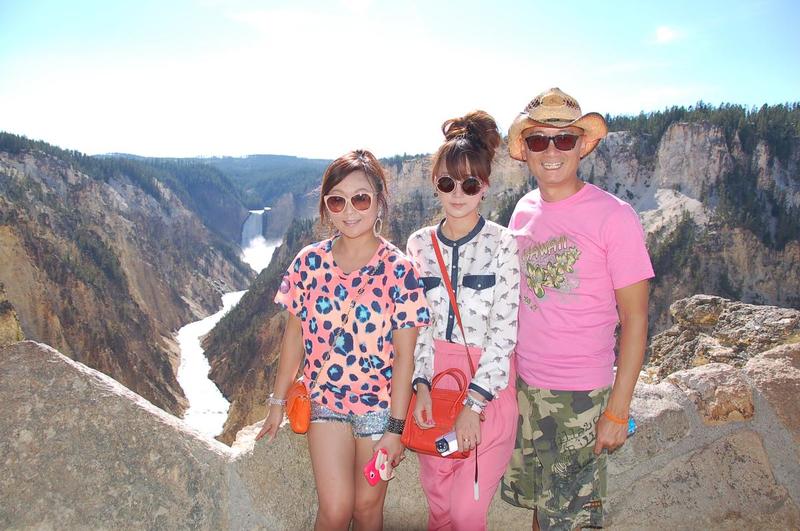 Facing a deadline to get a green card or go home, Chinese immigrant Xiaoyu “Hugh” Hou narrowed his options to two: Marry an American or come up with $500,000 to invest in a jobs project.

“I don’t want to get married. It’s not my lifestyle,” said the 32-year-old tech entrepreneur, now living in Santa Monica. “I asked my mom for the money.”

Five years after he lent mother’s half-million to a San Bernardino redevelopment project, Hou got her money back, plus interest. And 1 1/2 weeks ago, he became a U.S. citizen.

There’s a long line to enter “the golden door,” as the gateway to America is known in a poem at the Statue of Liberty. But immigrants like Hou are finding a shortcut: investing in real estate.

Under a rapidly expanding program called EB-5, immigrants can get a green card for themselves and their families if they invest at least $1million and create 10 or more jobs. The minimum investment drops to $500,000 if the project is in a rural area, or one with high unemployment.

Although the 25-year-old program got off to a slow start, EB-5 investment has exploded since the recession.

Those dollars are going to such real estate developments as hotels, apartments, office buildings and a 400,000-square-foot shopping center.

This year’s investment is on track to hit $3.6 billion, the group says.

Businesses called “regional centers” – which can be privately or publicly owned – recruit investors from around the globe, pool their capital and funnel the money to various developments.

Typically, the return on such investments is small – 1 percent a year or less – since investors’ main interest is getting a green card, not making money, observers said.

During the recession, bank loans dried up, forcing U.S. businesses to find alternative sources of financing. At the same time, foreign investor demand for EB-5 visas mushroomed due to China’s economic boom and Canada’s decision to limit immigration.

“U.S. companies couldn’t get financing,” said Ronald Fieldstone, a Miami attorney who serves as counsel for EB-5 developers and foreign firms. “Then the program started catching on for various reasons, one of them being that you could get a source of capital at a reasonable rate.”

The number of regional centers grew from 11 in 2007 to 697 as of August, government figures show.

Eighty-five percent of EB-5 visas last year went to immigrants from China, State Department figures show. Experts say they are seeking a better education for their children and the freedom to travel that comes with a U.S. passport.

Applicants from South Korea, Mexico, Taiwan and Vietnam accounted for an additional 6 percent.

“It’s a win-win program,” said Christine Hanna, chief operations officer for Global Premier America Regional Center in Irvine, which will break ground in September on the Orange Medical Plaza, an immigrant-supported office building across Main Street from the Children’s Hospital of Orange County.

“Most of our investors are highly educated business owners, extremely wealthy,” Hanna said. “They come here, and they flourish.”

A boon for real estate

The EB-5 law will go before Congress for reauthorization next month, and legislators are considering a number of reforms, including raising investment minimums.

Investment in construction and real estate – mixed-use projects, hotels, hospitals, offices and massive housing projects – accounted for $872 million of that economic impact, generating more jobs and capital than any other sector, the study said.

“The program is basically to create jobs and stimulate the economy,” said David Hirson, a Newport Beach immigration attorney who has worked on EB-5 projects since the early 1990s.

“We’re getting many projects and buildings that we would not otherwise have – be they stadiums, be they high-rises. And that stimulates the economy. Not only by the investments, but by (wealthy immigrants) coming to live here. And they continue to invest here.”

Critics, however, say the EB-5 program allows immigrants to buy their way into America, circumventing the long waits other immigrants face.

“We shouldn’t be selling visas to anyone. It’s morally wrong. It’s a highly inappropriate policy,” said David North, a senior fellow at the Center for Immigration Studies, a D.C.-based think tank that supports a lower level of immigration.

The program, some also complain, is fraught with fraud and abuse and doesn’t benefit rural or high-unemployment areas as it is meant to. Critics, and even some EB-5 proponents, say U.S. census tracts are often linked in such a way that areas of low unemployment are gerrymandered to benefit the applicants, who then qualify for projects with investment minimums of $500,000 rather than $1 million.

More than 90 percent of the EB-5 visas issued nationwide are awarded for $500,000 investments.

The investment nets the applicants green cards for themselves and also their immediate family members. Of the 10,000 investor visas issued last year, about 6,000 went to spouses and children.

Orange County has fewer EB-5 projects than surrounding counties, observers say, because few areas in the county have unemployment rates high enough to qualify for the lower investment minimum.

The Meridian Residences at Fashion Island may be one of the largest $1 million-minimum EB-5 projects in the nation, said Kraig Schwigen, a senior vice president for CMB Regional Centers, an Illinois-based center funneling funds to Meridian and 19 other Southern California projects.

Meridian drew 42 investors, compared with the 232 who invested $500,000 apiece in the Great Wolf Lodge water park in Garden Grove and 394 who are backing a hotel, office building and mall at The Source in Buena Park.

Yao, an electrical engineer from Shanghai, created a business that represents U.S. semiconductor manufacturers in China. The job brought Yao to the U.S. for sales meetings every summer starting in 1997. He brought his family, and they typically would stay several weeks in the Fullerton home of a business associate who became his friend.

Life in America grew on him.

Yao wanted his daughter to be educated in the U.S., but balked at the idea of investing through the EB-5 program when he first read about it in 2003. Too risky, he decided.

By 2007, however, Yao found a project he had faith in: a public-private partnership to build offices, commercial centers and possibly homes at the Philadelphia Navy Yard. He invested $500,000 in late 2008.

By 2009, Yao and his family had moved into an Irvine apartment and started house shopping, while their daughter, Regina Yao, attended Irvine High School. He got back his original $500,000 in 2013.

The family eventually bought a five-bedroom home in a gated community in north Orange, and in the past few years they have taken road trips to such places as Yellowstone National Park, Mount Rushmore, Washington, D.C., and Niagara Falls.

An immigration attorney told Paul and Sharon Little it would take their family eight to 10 years to emigrate from England to the U.S., even though Sharon’s father is a permanent U.S. resident.

The Littles had been visiting Sharon’s father in Hemet annually since 1999, and they fell in love with the California lifestyle, the people, the weather. They wanted their daughters to grow up here, believing they’d have more opportunities in the U.S.

But after getting their lawyer’s news, they gave up their dream of coming to America. Until 2007, when Sharon read about the EB-5 program on the Internet.

Within a year, Paul, 52, got a buyout from his job as an executive in the travel industry, providing cash for their investment. They put their house on the market and started researching places to invest.

“We wanted to make a good choice,” Paul said. “There was no guarantee you get your money back.”

They ended up investing $500,000 in CMB’s project in San Bernardino, which is building roads and bridges for a new development at the former Norton Air Force Base.

The Littles spent about $50,000 more in legal fees and other costs. They had to provide documentation to the U.S. Embassy in London proving they had their vaccinations and were physically fit. Then they got their conditional green cards, good for two years.

On July 22, 2009, they moved to California, eventually settling down in the Inland Empire town of Murrieta, where Paul opened an Irish pub called the Shamrock. The Littles’ daughters, Nicole, 16, and Brooke, 13, went from a small Catholic school back home in Manchester, England, to a 1,500-student public school. “As a parent, it was scary,” Paul said.

Hugh Hou, from China, first came to the U.S. after getting a student visa to attend a master’s program in communications at Cornell University. After graduation, he got a six-month internship visa while employed at a Southern California branding firm, then renewed it for another six months. After that, there were no more renewals.

“I work here, my friends are here,” Hou said. “I tried to find another route” to stay here.

That’s when he learned about EB-5 visas. For the next six months, Hou became an EB-5 expert.

He spoke to regional centers, read financial statements, made sure each investment’s risk was tolerable. Like the Littles, Hou settled on CMB’s Norton Air Force Base project.

Hou invested the money and got his green card. About a month ago, he got his mother’s money back. He’s keeping it in the U.S. for her. She plans to visit shortly and buy a rental house with the cash.

Hou said finding a good EB-5 investment isn’t guaranteed. There are tons of brokers in China hawking U.S. investment programs, and he suspects some are scams.

Government figures show that an average of 274 EB-5 green card applications, or just over 15 percent, get denied each year.

A recent Government Accountability Office report found that government investigators identified at least 35 cases of securities fraud in the EB-5 program, noting that “immigrant investors may be vulnerable to fraud schemes because they may be primarily focused on obtaining their visas.”

The report said the government is unable to adequately monitor the program.

Hou noted that it’s virtually impossible to research EB-5 programs while in China, especially if you don’t speak English.

“EB-5 is actually a brutally risky investment,” Hou said. “Right now, if my friend said, ‘I want to be in America, what can I do?’ I would say, ‘I’ll introduce you to (an American) girl, and you should get married.’”