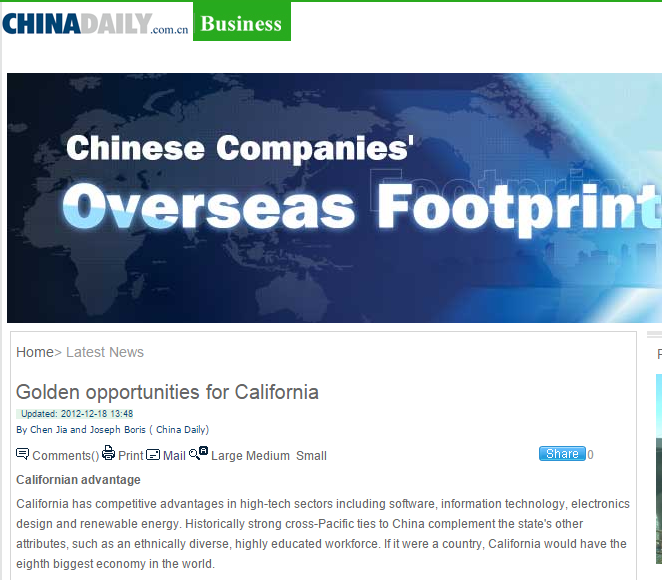 The state, now fifth in the United States in the value of investment from China, aims to climb higher by tapping its intrinsic strengths, Chen Jia and Joseph Boris report from Oakland, California

With China a top target for US municipalities and states seeking foreign investment, one destination can put a number on its potential appeal to Chinese capital: $60 billion.

By 2020, California could attract that amount from China, according to an October report from Rhodium Group, a consulting firm in New York that tracks Chinese outward investment. 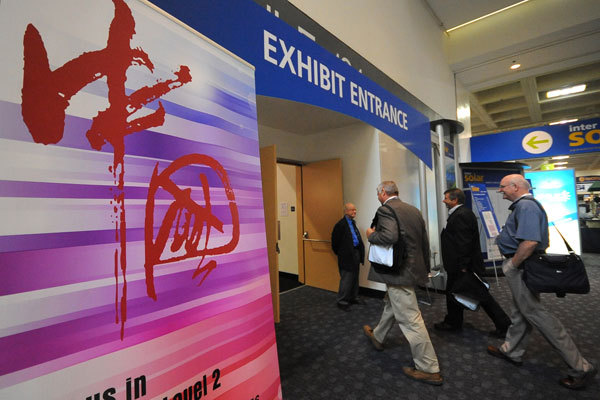 California accounts for more than a quarter of all Chinese investments in the United States, having notched 156 deals between 2000 and 2011. That was more than the other four top recipients - New York, Texas, Illinois and Michigan - combined.

But in terms of total investment value, California ranks fifth in the nation, with $1.3 billion from deals over the past 12 years, according to the report.

Through 2008, Chinese direct investment in the US was typically below $1 billion a year. Since soaring to just under $2 billion in 2009, activity has been growing at an unprecedented clip. From January to September, Rhodium said in a separate report, the figure hit $6.3 billion - eclipsing even the full-year record of 2010.

California in particular is poised to benefit from this upward trend. But it will have to grab a bigger chunk of Chinese investment on these shores to reach the Rhodium report's $60 billion target in eight years. That will happen only "if the state and private sector do a better job working together to attract Chinese capital", the report said. 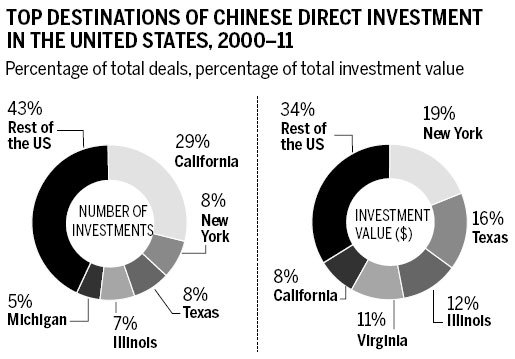 "California is a good target for Chinese investors because we are looking for infrastructural development such as hotels and a baseball stadium," said Jean Quan, mayor of Oakland in northern California.

Quan expects increased investment from China, particularly in property development, which is so important to her city. This will be due in large part, she says, to US Congress' recent extension through September 2015 of the EB-5 visa program.

Under EB-5, an applicant is given permanent US residency if his investment of at least $1 million leads to 10 full-time jobs within two years. The threshold is just $500,000 if the jobs created are in a rural or high unemployment area of the US.

"This can guarantee a steady rate of return for stimulating purchases of bonds (for publicly funded development projects), and people are able to immigrate because of EB-5, so you'll see more of this in California," Quan said.

Local officials in the US including Quan have said real estate investors from China's growing middle- and upper-income populations seem particularly interested in the visa program.

The 2008-09 financial crisis, spurred by the collapse of the US housing-market bubble, left banks and other lenders reluctant to finance residential or commercial developments, stalling projects including several in hard-hit California.

For municipal and state governments that slashed spending to deal with reduced tax revenue as property prices sank, foreign investors are increasingly sought as a financing source. 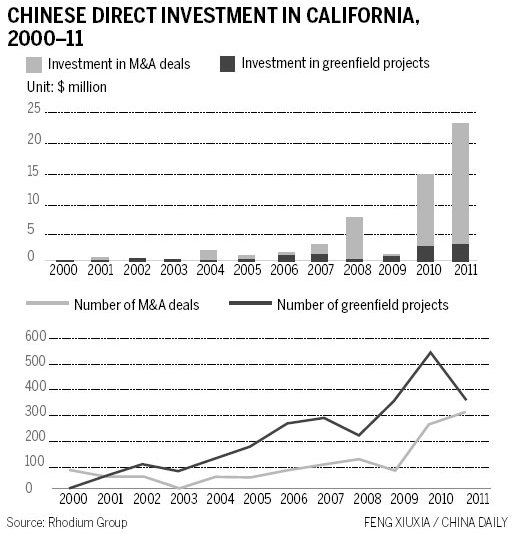 Oakland is an easy fit for Chinese investors, with hotels close to the city's predominantly Chinese-American neighborhoods and a large population of skilled, bilingual workers.

"There is a growing middle class and more tourism in China," Quan said. "Chinese understand exporting and importing, and there is more interest in import-export exchanges."

As an example, the mayor cited the deal for the Tribune Tower, a city landmark whose neon sign bears the name of Oakland's daily newspaper, a former tenant.

In late 2011 the 20-story, 8,175-square-meter building was bought in foreclosure for $8 million by a group of private investors assembled by businessman and Oakland native Tom Henderson. Henderson won't identify the investors by name, but he has said most are from China.

The Tribune Tower now houses CallSocket LLC, a call-center operator that Henderson co-founded, as well as another of his startups, San Francisco Regional Center LLC, which attempts to find prospective EB-5 immigrants who could help finance local development projects. The company - and Henderson - would take a stake in any deal and operate as a general partner on the project that's formed.

In addition, Henderson is investing $3 million to $4 million to renovate the building, helping to attract tenants, including a restaurant, for the rest of the building.

The businessman said that CallSocket, which so far has created 300 jobs in the city, could be a job-creation model through the immigrant-investor program.

"We are bringing in $100 million to Oakland alone. Over the next 18 months, we'll create 2,000 jobs in Oakland through the EB-5 program," said Henderson, who recently returned to California from China. The trip was his 19th to China since January 2011. He has offices in Shanghai, Beijing and Guangzhou.

Henderson's San Francisco Regional Center was established under the auspices of US Citizenship and Immigration Services, the government agency that created the EB-5 program in 1990.

About 95 percent of prospective EB-5 immigrants turn to regional centers to help navigate the visa-application process, a USCIS spokesman was quoted as telling The Wall Street Journal earlier this year.

There are 245 regional centers in the US, 61 of them in California, according to the USCIS website.

Mayor Quan said she's seeking EB-5 money from Chinese investors for either of two potential projects, Victory Court and Coliseum City, that would be home to Oakland's professional baseball, basketball and football teams.

Quan, Oakland's first woman mayor and the first Chinese-American to lead a major US city, headed a trade mission to China last year to spur investment in her largely working-class city across the bay from San Francisco.

Ed Lee, the Chinese-American mayor of San Francisco, is preparing to visit China next year, according to Darlene Chiu Bryant, executive director of ChinaSF, an economic development initiative of the city.

As more Chinese companies set up offices and expand operations in the US, San Francisco aims to guide those considering a move through each stage of decision-making and relocation. ChinaSF has a bilingual staff and offices in San Francisco, Shanghai and Beijing that support an exchange of ideas.

"Entrepreneurs and small and medium-sized enterprises value California for its advanced legal structures, openness to new products and partners, worldliness toward non-Americans and strong business facilitation services, among other advantages," according to the Rhodium Group report.

It highlights the efforts of public-private partnerships such as ChinaSF as well as business groups like the Bay Area Council and the California governor's GO-Biz agency, which aims to simplify companies' entry into the state.

Chinese investment in the US has taken various forms. One local politician even made it a key plank of his election platform.

Stewart Chen, a chiropractor who ran for one of two open seats on the city council in Alameda, near Oakland, lost his bid for office in the Nov 6 elections. But his third-place finish among voters could suggest support for his effort to involve Chinese investors in redeveloping Alameda Point, a former US navy air station in the city.

"Chinese investment has helped spur growth in the California economy at a time when it was in the midst of a recession," said Kevin Johnson, dean of the law school at the University of California, Davis. "California political leaders at all levels realize this and are looking for investment into local economies. Investment, capital and jobs are all needed."

In February, Governor Jerry Brown announced at a US-China economic forum in Los Angeles his plan to form a China-California task force to spur cooperation, investment and trade.

Later in the year, Brown re-established a state trade and investment office in Shanghai. California had closed a dozen such offices around the world in a budget-cutting move eight years ago, including in Shanghai, Hong Kong and Taiwan.

Restoring California's presence in China took place nearly 40 years after Brown, during his first two terms as governor (1975-83) called for "increased normalization" in US-China relations. Brown, who was out of politics until being elected to two terms as Oakland's mayor, has been serving again as governor since 2011.

China is the world's No 1 exporter and third-biggest importer, behind the US and the European Union. Most Chinese exports to the US go through California's ports, and nearly all US exports to China pass through the state.

In 2010, China surpassed Japan as California's No 3 export market, posting a 20 percent increase over the previous year.

California has competitive advantages in high-tech sectors including software, information technology, electronics design and renewable energy. Historically strong cross-Pacific ties to China complement the state's other attributes, such as an ethnically diverse, highly educated workforce. If it were a country, California would have the eighth biggest economy in the world.

Although the Rhodium report sees Chinese direct investment in California soaring to between $50 billion and $60 billion by 2020, it cautions that the state will need a focused strategy to reach that goal.

"California ... is in a position to lead the nation in attracting Chinese investment in the decade to come," according to the report's authors, Daniel Rosen and Thilo Hanemann of Rhodium.

The state, they said, must pitch its assets: quality of life, a creative workforce and diverse economic centers in the San Francisco Bay and Los Angeles areas. Other US states have been more aggressive in organizing trade missions and other forms of outreach, the report said.

China's escalating direct investment in the US, the report noted, "has rekindled old arguments about foreign firms and the national interest". It said that although screening of foreign investment on security grounds is necessary and legitimate, "concerns can be politicized for protectionist ends".

"California has more self-interest than any other state to offer solutions based on its experience with successful, and failed, deals and a sophisticated understanding of cutting-edge industries."

Robert Berring, a University of California, Berkeley, law professor, expressed concern that "parochial and backward interests within the United States may see increasing Chinese investment as a threat.

"Chinese capital can provide a much-needed boost for the California economy," he said. "If the 21st century is to be a good one, the US must see China as a partner in progress."

Chinese investment is a boon to the US economy and can help draw the two countries closer, Berring said.