Visa Bulletin For May 2015 - EMPLOYMENT-BASED PREFERENCES 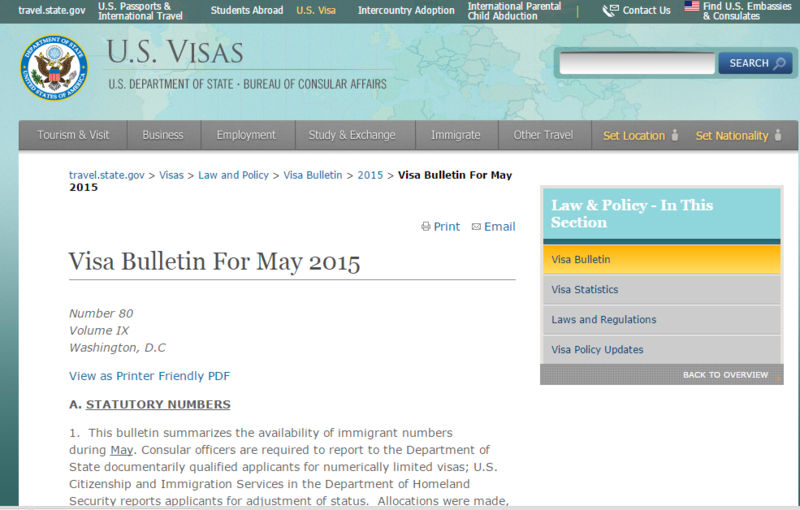 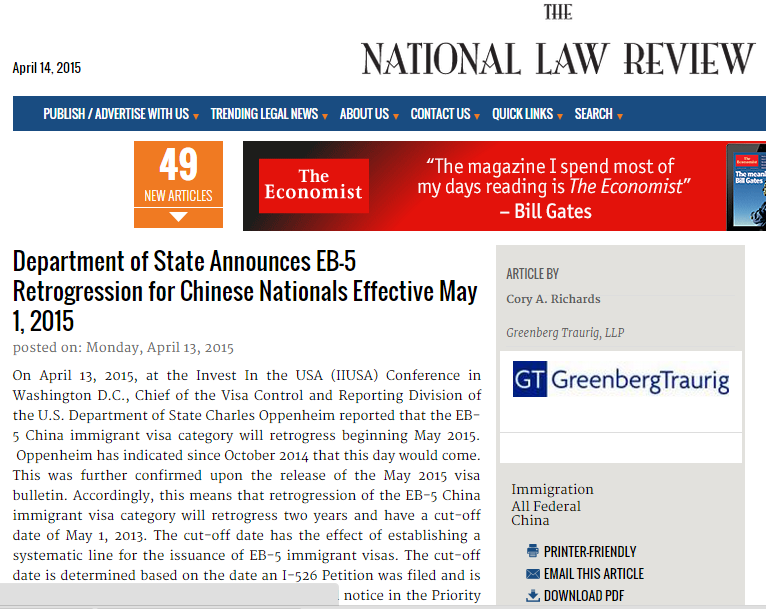 On April 13, 2015, at the Invest In the USA (IIUSA) Conference in Washington D.C., Chief of the Visa Control and Reporting Division of the U.S. Department of State Charles Oppenheim reported that the EB-5 China immigrant visa category will retrogress beginning May 2015.  Oppenheim has indicated since October 2014 that this day would come. This was further confirmed upon the release of the May 2015 visa bulletin. Accordingly, this means that retrogression of the EB-5 China immigrant visa category will retrogress two years and have a cut-off date of May 1, 2013. The cut-off date has the effect of establishing a systematic line for the issuance of EB-5 immigrant visas. The cut-off date is determined based on the date an I-526 Petition was filed and is the date included on each I-526 Petition approval notice in the Priority Date box. Therefore, with the cut-off date set at May 1, 2013, based on the May 2015 visa bulletin, it means that during the month of May 2015, only those EB-5 investors (and their derivative beneficiaries) with a Priority Date of May 1, 2013, or earlier may apply for an EB-5 immigrant visa. The dates in the visa bulletin will either move forward, backward, or remain stagnant, and such changes will be reported monthly. Therefore, it is important that an applicant check the visa bulletin each month on the DOS website to see if their Priority Date has become current (i.e. if their Priority Date is earlier than the date listed on the visa bulletin).

Oppenheim also stated that fee bills (the invoice provided by the National Visa Center for approved petitions in order to proceed with filing a consular processing application) will be sent out for EB-5 petitions approved in April 2015. Further, the State Department and USCIS will provide clearer guidance shortly, including the processes of filing an I-824, Application for Action on an Approved Application or Petition.

It is important to note that retrogression of visa numbers is based on country of “chargeability” (or country of birth) rather than country of citizenship. Therefore, those individuals who were born in mainland China are the only individuals impacted by this news. Individuals born in Hong Kong, Taiwan, or Macau are not affected. Further, if the EB-5 investor’s spouse was born in a country other than mainland China, the investor and their family may be “cross-chargeable” to the spouse’s country of birth, thereby escaping the Chinese quota retrogression.

With this news, we would like to bring attention to President Obama’s November 2014 outline of proposed changes that could potentially and positively impact the EB-5 program that would take place without regulatory change, with regulatory change, and his Presidential Memorandum on Visa Modernization.

With respect to the announced regulatory changes through the Administration Procedure Act, there are two key points that could provide a benefit to the EB-5 investor. First, is to enable entrepreneurs to be paroled into the United States and work if they are researchers, inventors, or founders of businesses. Second, is “early adjustment” that would enable individuals who are eligible to apply for adjustment of status, but for a non-current priority date, to file for adjustment and receive work authorization and travel permission.

With respect to the Presidential Memorandum on Visa Modernization there are two additional points that could positively impact EB-5 investors. First, a possibility of recapturing permanent resident visa numbers based on visa numbers allocated by Congress but left unused, meaning, additional visas would be carried over to the next year’s available visa numbers. This would have a large impact on EB-5 especially if the President allowed the State Department to go back five years or more and recapture the thousands of unused immigrant visas in the EB-5 classification during those years. Second, is the possibility of not counting derivative spouses and children toward the EB-5 visa quota. Currently, when an EB-5 investor files for and has an approved I-526 petition, their family members count against the 10,000 EB-5 immigrant visa cap.