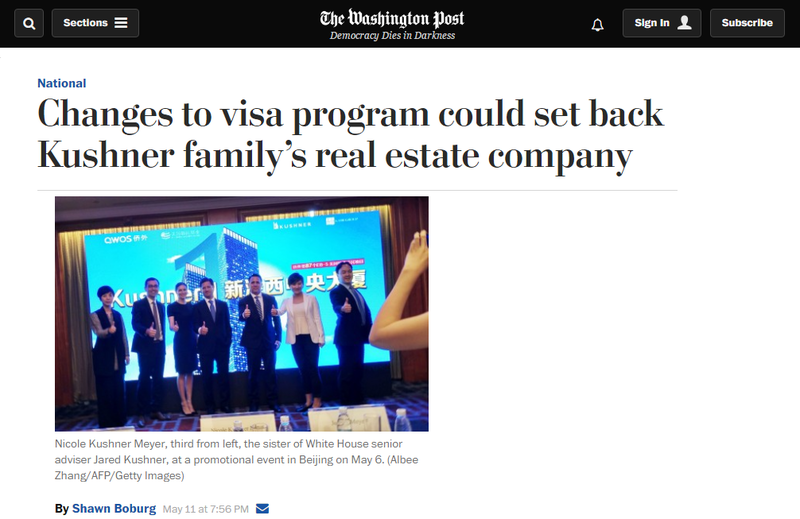 Changes to a controversial visa program under consideration by the Trump administration could hurt a real estate project partially owned by the family of White House adviser Jared Kushner, the president’s son-in-law.

The decision, which rests with Homeland Security Secretary John F. Kelly, stands as an early test of how the Trump administration will handle matters that could carry significant consequences for the financial interests of the president’s extended family.

At the center of an ongoing controversy is the Kushner Cos.’ use of a federal visa program to raise $150 million from Chinese investors for two luxury towers in New Jersey. Under the EB-5 program, wealthy foreigners can get a fast-track visa if they invest at least $500,000 in an eligible project. Program critics have nicknamed it “visas for cash.”

The changes Kelly is considering, which have already gone through extensive review and public comment, would make it much more difficult to attract foreign money to projects in relatively prosperous areas, such as the one in Jersey City, experts said.

Kushner’s sister Nicole Kushner Meyer generated criticism for the Trump White House on Saturday when she pitched her company’s project to investors in China, mentioning her brother’s name and featuring a photograph of President Trump. Potential investors were urged to sign up before the rules change.

A spokeswoman for Kushner Cos. said Thursday morning that Meyer would not appear at another investor presentation scheduled for Saturday in Shenzhen. “No one from Kushner Companies will be in China this weekend,” Risa Heller, a company spokeswoman, wrote in a statement to The Washington Post on Thursday.

Sen. Charles E. Grassley ­(R-Iowa), a longtime critic of the EB-5 program, said Thursday that Kushner’s sister may have left investors with the false impression that they would get special treatment because of her brother’s position in the White House.

Grassley, who says the visa program should be used to help create jobs in rural and economically depressed areas, sent a letter to Kelly demanding that he quickly implement the proposed program changes.

The Department of Homeland Security will “respond to the senator appropriately,” agency spokesman David Lapan said.

The Kushner project, known as One Journal Square, is the latest example of the potential conflicts of interest that Jared Kushner faces in his prominent administration role. Kushner, who is married to Trump’s daughter Ivanka, ran his family’s real estate company before joining the administration and was instrumental in planning the Jersey City project. 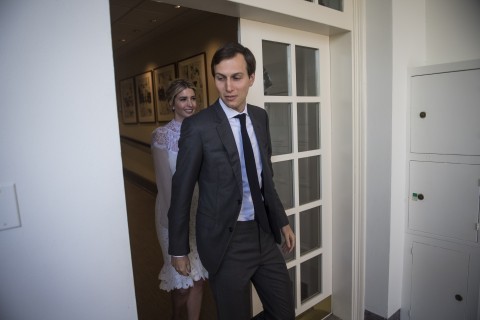 Kushner has divested himself from One Journal Square, one of a number of luxury projects the family has undertaken outside New York City. The White House has said he will not be involved in any discussions about the future of the EB-5 program. Kushner also was not involved in his sister’s China presentations last week, officials said.

The White House and Jared Kushner did not respond to requests for comment Thursday. Kushner’s sister previously apologized for mentioning her brother’s name during last week’s presentation and said it was not an attempt to attract investors.

Kelly is expected to make a decision on whether to adopt the changes in the coming months.

The regulatory changes, proposed by the Obama administration one week before Trump took office, would close an opening that allows developers who propose projects in wealthy urban areas, such as Manhattan and even Beverly Hills, to qualify for incentives that are supposed to be reserved for poorer areas. Under the new rules, foreigners who want visas would have to invest hundreds of thousands of dollars more if a project is not in an area with high unemployment.

Gary Friedland, a scholar in residence at New York University’s Stern School of Business, said the Kushner family’s One Journal Square is an example of a project that would have more trouble raising money under the new rules.

“If the rules are finalized, they’d affect that project and many other projects throughout the country,” Friedland said.

Big-name developers have hired armies of lobbyists to fight changes in the EB-5 rules.

Among them is a Florida businessman who has helped the Kushners raise EB-5 money and is a major player in the EB-5 industry.

Nicholas Mastroianni III, president of U.S. Immigration Fund, a firm that specializes in pooling EB-5 investors, contributed $100,000 to the Trump inauguration. He was invited to an exclusive dinner with Trump’s future Cabinet members on Jan. 18, days after the changes were proposed. Kelly was one of the Cabinet members who mingled with top donors at the event.

The Palm Beach Post reported last month that the two sat at the same table. A spokesman for Mastroianni initially told The Post that he did not think the report was accurate but did not respond to follow-up requests for comment.

Lapan, the DHS spokesman, said Kelly has no recollection of meeting Mastroianni at the dinner.

“The dinner occurred before he was confirmed as secretary of homeland security, and he had no knowledge of the EB-5 program until recently,” Lapan said.

U.S. Immigration Fund has spent $280,000 in the past four years lobbying federal lawmakers on EB-5, according to the Center for Responsive Politics.

In 2012, Kushner turned to Mastroianni to help secure $50 million in financing for ­another Jersey City project, a 50-story tower in a waterfront neighborhood across from Lower Manhattan. A representative of Mastroianni’s firm asked DHS to speed up its approval of the EB-5 project because the neighborhood had suffered damage from Hurricane Sandy. DHS approved the project months later.

The project, called Trump Bay Street, features a pool deck, saunas and 417 one- and two-bedroom apartments that rent for between $2,500 and $5,000. Kushner still has an ownership stake in the building.

Kushner Cos. also previously planned to raise $850 million in EB-5 money to renovate a marquee building at 666 Fifth Ave. in Manhattan, according to published reports earlier this year.

Trump recently extended the EB-5 program without making changes that had been recommended by the Obama administration and were supported by congressional leaders.

One Journal Square faces other hurdles. A key prospective tenant, WeWork, told The Post on Wednesday that it had suspended plans to lease space in the building, as first reported by Bloomberg. That threatens pledged tax breaks from the state of New Jersey.

Steve Fulop, the mayor of Jersey City, also said over the weekend that he opposed the Kushners’ request for $30.4 million in city bonds and a 30-year tax abatement.