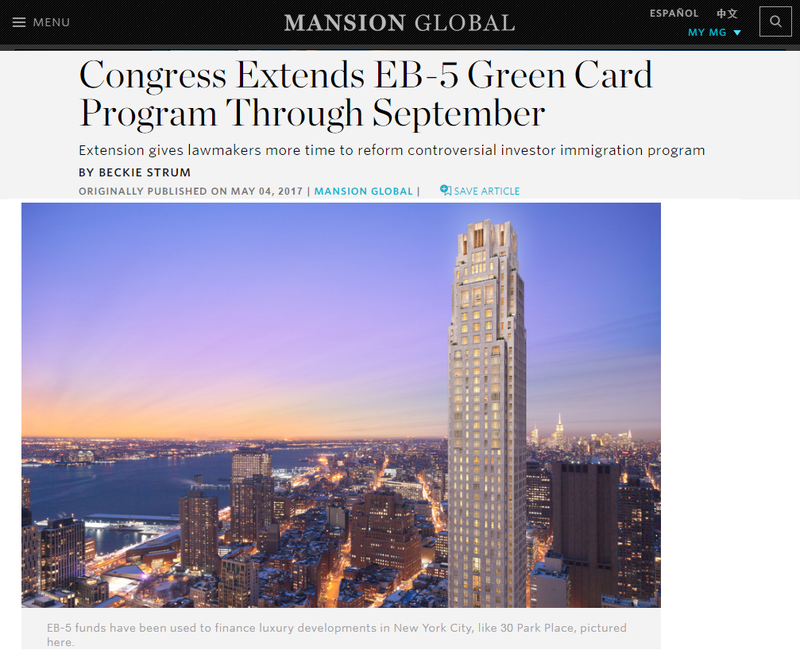 The controversial EB-5 immigration program, a way for wealthy foreigners to obtain green cards through investment in the U.S., will live on for at least another five months thanks to a spending bill the Senate passed on Thursday.

The $1.1 trillion in federal funding averted an impending government shutdown and wrapped in an extension for EB-5 only one day before the immigrant visa program’s expiration. The extension bides lawmakers and industry lobbyists more time to come up with a set of long-awaited reforms to the program before the next expiration date, on Sept. 30.

“It’s frustrating that we didn’t get it done two weeks ago,” said Mike Halloran, chairman and chief executive of NES Financial, a financial technology company based in Silicon Valley specialized in EB-5 administration. Mr. Halloran, a stakeholder who’s been involved in the legislative negotiating, says he’s hopeful a deal could be reached within a month.

For two years, lawmakers have passed extension after extension in lieu of permanent legislation reforming the EB-5 program, which has proved vulnerable to corruption and opacity. Critics also say it has failed to spark development projects in rural and depressed urban areas, as it was intended when created in 1990.

U.S. Citizenship and Immigration Services sets aside 10,000 visas each year for investors and their families through the program.

Last month, Rep. Steve King, an Iowa Republican, even introduced a bill to end the program completely—though experts say Mr. King is in the minority.

The current program allows foreigners to obtain green cards by investing at least $500,000 in economic development projects, which have tended to be luxury developments and hotels in urban centers like New York City, Miami and Los Angeles.

It has benefited President Donald Trump and his top adviser and son-in-law, Jared Kushner, who reportedly used EB-5 investors to finance Trump Bay Street, a luxury apartment complex in Jersey City, New Jersey. The program has helped finance luxury mega developments like Hudson Yards in Manhattan. And luxury condo builder Extell Development Co. has worked to secure foreign financing through EB-5 for Central Park Tower, poised to be the tallest apartment building in the United States.

For now, stakeholders are glad to have more time to negotiate without the program’s fate looming so close, said Invest in the USA, a trade organization for the EB-5 program, in a blog post.

“American workers and local developers depend on EB-5 as a vital source of capital,” the organization wrote, adding it hopes the end result will “shape the program into an even better economic development tool.”