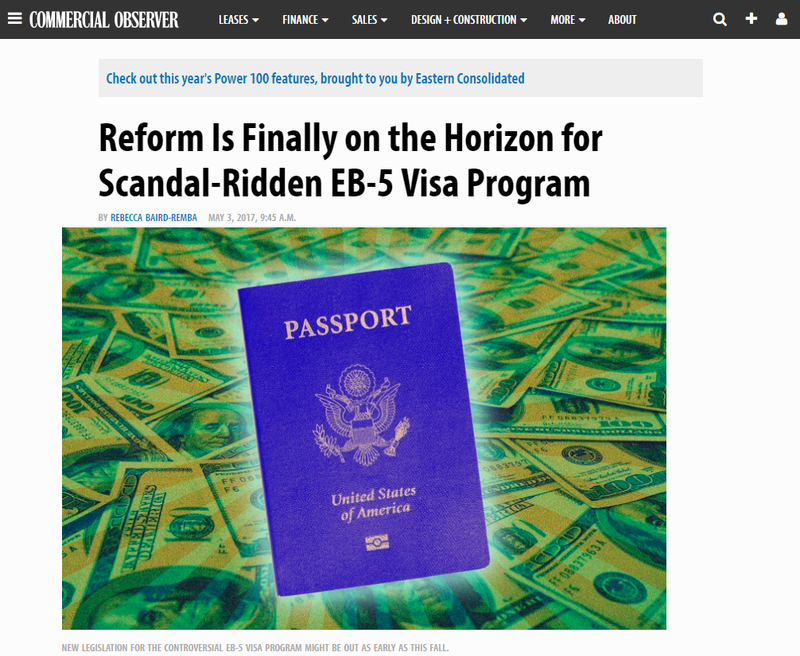 Congress is kicking the can down the road once again on reforming the controversial EB-5 visa program, which offers visas to foreign investors who pump money into job-creating projects. But a revamped version of the 27-year-old program is in the works and could be making its way through Congress this fall.

Last Friday, EB-5 was extended for the fifth time in two-and-a-half years, as part of a stopgap federal spending bill that will keep the government operating through May 5. Most sources predict that after that point, the legislation will be bundled into a federal budget bill that would keep the government funded—and EB-5 alive—through Sept. 30.

During that five-month window, legislators and lobbyists hope to cobble together a new version of the controversial visa program. Real estate industry insiders don’t think Congress will allow the program to expire, because it provides cheap financing for dozens of residential and hotel developments across the country. But rising anti-immigrant sentiment has meant the program—sometimes billed as a money-for-green-card scheme—is in some politicians’ sights.

John Banks, the president of the Real Estate Board of New York, said his group is working with an alliance of rural interests and the EB-5 Investment Coalition, a major lobbying organization, to forge a compromise on the legislation that will work for rural and urban state legislators, who have fought over who should get a bigger slice of the EB-5 funding pie.

“In the last three or four months, we’ve made progress with the rural coalition to address their concerns,” Banks said. “We are fairly confident that we’re going to come together on a compromise [by September]. It gives an opportunity for elected officials to work from a compromise position rather than what was two very opposing views on how the program should be structured.”

Banks outlined a revised EB-5 plan that would require the federal government to set aside a certain percentage of the 10,000 visas issued annually through the program for rural and extremely impoverished areas. The legislation would be modeled on an EB-5 reform bill introduced by Sen. Chuck Grassley, R-Iowa, and Sen. Patrick Leahy, D-Vt., two years ago.

Leahy and Grassley’s bill would reserve 750 visas for immigrants who invest in rural areas and another 750 for high-unemployment urban communities in the first year, and those totals would rise to 1,500 visas apiece the following year. REBNY’s proposal would actually set aside even larger blocks of visas than the Leahy-Grassley plan, but Banks refused to specify exact numbers. Real estate developers in major urban areas strongly oppose any geographic restriction on where vouchers can be used, but Banks said they’ve come up with a solution.

“If there were visas that weren’t used by the rural alliance, they could go to a pool of visas that other people could take advantage of, after a certain period of time,” he explained. “And then they [the rural stakeholders] could compete with everyone else.”

Restricting the number of available visas for big cities could force up the cost of acquiring them and ultimately drive away investors, said Mark Edelstein, who heads the real estate practice at Morrison and Foerster and has handled EB-5 transactions for dozens of high-profile New York City developments.

“If [the process] gets too long and too expensive, investors could end up going to another country,” he said.

The program generated $3.8 billion in foreign direct investment last year and brought in $4.4 billion in 2015, according to data from Invest in the USA, a nonprofit trade association that represents EB-5 regional centers. And the Chinese are the heaviest users of the program, accounting for 82 percent of the 14,000 EB-5 visa applications approved by U.S. Citizenship and Immigration Services (USCIS) since 2011.

Since EB-5 was created in 1990, investors have had to sink at least $500,000 into a project to score a green card. But recent proposals have called for raising the minimum investment to $800,000 or even $1.35 million, inspiring fears among the real estate industry that the higher amount could cripple the program.

Shalom Segelman, who raises EB-5 investment money overseas and heads Madison Group, pointed out that raising the minimum investment amount could push foreign investors to look elsewhere. “You can go all around the world and buy your way in. The U.S. is one of the cheapest at $500,000,” he said. “Once you raise it to $1.3 million, you’re getting into London or Switzerland.”

He explained that EB-5 equivalents in western European countries and Canada involve investors putting money into government-backed bonds, rather than directly into real estate ventures, which carry much more financial risk.

Dictating where the visas could be used might be a futile exercise, Segelman said. Foreign investors have gotten more savvy over the last couple years, and they feel much more comfortable putting their money into a big project managed by a well-established developer like Extell Development Company, Related Companies or Durst Organization, rather than a smaller, riskier enterprise in the Midwest or the South.

“Investors don’t want to own a dairy farm,” he explained. “I don’t know if they’re going to want to invest $2 million in a $10 million Days Inn in Wisconsin. They’ll pay $1 million to go to Manhattan over $800,000 in Arkansas. To hedge your bet, it’s a no-brainer. They’d rather deal with a reputable developer.”

The present version of EB-5 mandates that a foreign investor commit $1 million to a project, or $500,000 if it’s happening in an area that can be considered rural or has an unemployment rate that’s at least 150 percent of the national unemployment rate. The cash can be used to fund a variety of ventures, including oil and gas drilling, ski resorts, wind farms, hotels and residential buildings. Each investment must create at least 10 jobs. If a commercial enterprise meets these requirements and the investor is willing to wade through eight or nine years of bureaucratic immigration process, he should eventually get green cards for himself and his family, according to Abteen Vaziri, the director of Greystone‘s EB-5 program. Basically, EB-5 is a backdoor to permanent residency for those wealthy enough to invest in certain American businesses.

In fact, many folks involved in EB-5 fundraising say they’re ready to embrace updates and anti-fraud policies for the program, which hasn’t changed much since it was established. “Everyone agrees that we need integrity measures,” Vaziri said. “There are so many regional centers right now that aren’t even doing projects. It will clean up the market and make sure that investors are protected.”

Members of Congress and federal regulators have been demanding reforms to EB-5 for years, because it has paved the way for poorly planned, money-losing schemes as well as large-scale fraud, particularly with expensive real estate developments.

In Northeast Vermont, a Miami-based real estate developer allegedly misused $21.9 million in EB-5 funds to buy a ski resort and defrauded foreign investors, sparking an investigation from the Securities and Exchange Commission into a scheme that federal and state officials have called “Ponzi-like,” the Burlington Free Press reported. Another high-profile case hit the news earlier this month: A Los Angeles-based attorney and her father allegedly raised $50 million from 100 Chinese investors through EB-5 but never actually invested the money, according to the Wall Street Journal.

After years of loose oversight and more than a few scandals, many agree that the program needs stricter federal oversight. But legislators have clashed over how the program should be structured, because under the current rules, the lion’s share of EB-5 money goes to New York, Texas, California, Florida and Maryland.

Grassley and Leahy’s plan would largely favor rural states like the ones they represent. Their bill would boost the minimum investment required to obtain a visa from $500,000 to $800,000—a bump that the real estate industry can live with.

“It’s better for the program because you get more money for the same amount of work,” said Segelman, explaining that it would allow developers to raise capital a little faster than the current minimum. “It’s not going to scare away any potential immigrants, especially if they fast-track it and get rid of the backlog.”

The Leahy-Grassley plan would also change the definition of a Targeted Employment Area (TEA), which determines how much EB-5 funding can be used. Under the current rules, the feds define a TEA as a rural area or an area with a population of 20,000 or more and an unemployment rate of at least 150 percent of the nationwide average. In the latter case, state officials can cobble together several census tracts that meet the 150 percent unemployment threshold and declare it a TEA—a practice often called “gerrymandering.”

If a project is planned in a TEA, investors only have to kick in $500,000. If it’s not in a TEA, that number rises to $1 million. If the two senators from rural states manage to push through their version of the program, the non-TEA investment remain the same at $1 million. Their proposal would tighten the definition of TEAs to favor rural and extremely poor communities, requiring that EB-5 only benefit places where the poverty rate is at least 20 percent of the federal level and the typical family doesn’t earn more than 80 percent of the area median income.

In the final days of the Obama administration, USCIS rolled out an even more controversial plan to raise the minimum investment to $1.35 million in TEAs and $1.8 million in non-TEAs. That plan is unlikely to move forward, but if it did, Vaziri said it would basically kill the program.

Another major caveat of the current program is that the government can only award 10,000 visas annually to EB-5 investors and their families. Applicants typically want to bring their spouses and children, often with the aim of putting their kids through the U.S. university system. If the government upped the number of visas in the program or simply counted each family as one application (rather than counting each person as a separate visa), officials could triple the capacity of the program, Edelstein said. Those moves would also shorten the multiyear wait for securing an EB-5 visa and allow the government to move more quickly through its sizable backlog of 22,000 applicants.

To further complicate matters, the Chinese government has imposed new restrictions on companies investing overseas. Edelstein explained that it has capped the amount Chinese investors can wire out of the country at $10,000 a day. And if a company exceeds a certain number of transfers, it has to secure approval from the government to continue moving money.

“The government is discouraging people from investing in foreign real estate projects,” he said. “Small and midsized EB-5 raises will be harmed.”