Congress Extends EB-5 for Another Week 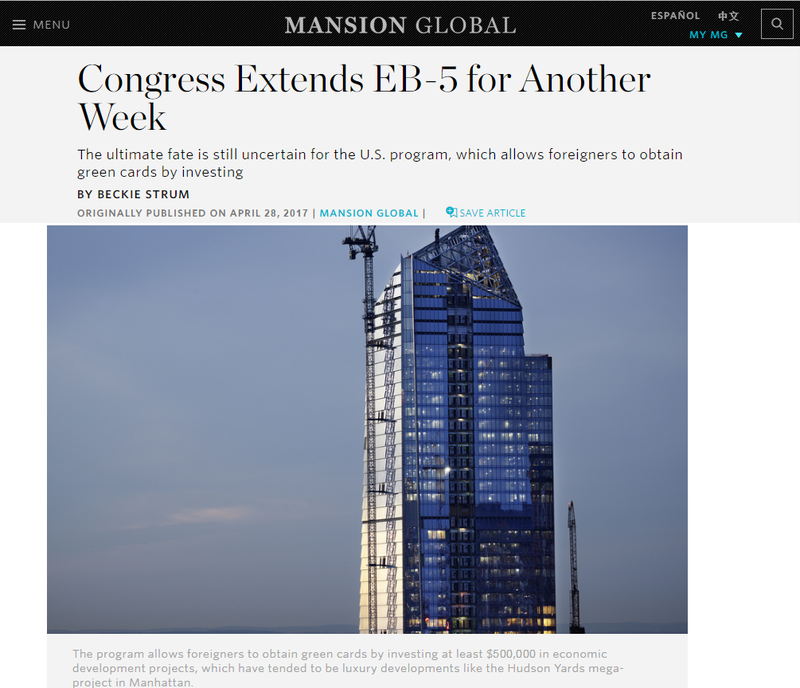 Congress on Friday extended for a week the EB-5 immigration program, a way for rich foreigners to obtain green cards through investment in the United States, according to U.S. Citizenship and Immigration Services.

The program that’s faced mounting scrutiny from lawmakers was set to expire but was saved—for now—in the nick of time as the government passed a continuing resolution to extend federal funding through May 5, which encompassed EB-5.

“We have another week of EB-5,” said Steve Blando, spokesman for USCIS.

The program allows foreigners to obtain green cards by investing at least $500,000 in economic development projects, which have tended to be luxury developments and hotels in urban centers like New York City, Miami and Los Angeles.

It has directly benefited President Donald Trump and his top adviser and son-in-law Jared Kushner, who reportedly used EB-5 investors to finance Trump Bay Street, a luxury apartment complex in Jersey City, New Jersey. But the program would have come to a grinding halt without the short-term extension.

This is good news for industry stakeholders, as it allows more time for negotiations with lawmakers over the fate of the program, said Invest in the USA, a trade organization for the EB-5 program, in a blog post.

The group wrote that it’s working with Congressional members toward "improvements that protect the integrity of the program and the projects that contribute so much to American communities.“

In 1990, Congress created the immigration path in order to stimulate economic growth through job creation and capital investment by foreign investors in exchange for green cards. The program has since been regularly reauthorized, most recently by President Barack Obama in December. But critics have increased pressure to reform the program, saying it favors the wealthy over immigrants in desperate need and has become rife with abuse.